Why did Microsoft make parameters, local variables and private fields have the same name naming convention?

I asked this question quite some time ago: How do you name your private variables in C#?

In one of the answers, I was pointed to Microsoft's MSDN page that shows that private variables/fields should be named like this:

But a parameter would be:

you have no way of knowing which one you are talking about.

I am now starting a new project and one of my co-workers is asking me why we don't do something to differentiate at least some of these.

I am wondering the same thing. Why didn't Microsoft's standard keep these different?

The original naming conventions had a m_ prefix for class members, this got reduced down to simple an underscore. You'll see a lot of older C# Microsoft code using an underscore prefix. However, I heard in a Tech Ed once that a leading underscore is not CLS compliant. I assume this is the reason why they moved to the simpler one-name-fits-all scheme. It used to be (not sure now) that VB.Net's case insensitive names were also not CLS compliant.

For what its worth, I still use the leading underscore for class members. Even though you can disambiguate using this (this.name as opposed to name), bugs still get through.

You do not have to do everything that MS tells you to do.

As for private variables, there are different opinions on that. I've always used the standards found here, which specifies to use a leading _ before private variables, although the author does say that the _ is a bit controversial and that Microsoft recommends against it.

Wikipedia states that in C and C++

Names beginning with double underscore or an underscore and a capital letter are reserved for implementation (compiler, standard library) and should not be used (e.g. __reserved or _Reserved).

so perhaps that was the reason behind Microsoft recommending against that, although it is fairly well known that many Microsoft devs use an _ prefix for their private variables anyways.

I can't tell you for sure why they didn't keep them different. It's likely that nobody can unless someone who took part in creating the standards happens to see this question.

Many people create their own conventions by prefixing instance variables with _ or m_, but I really don't think it matters. You can infer a lot from context and IDEs these days are smart enough to help you out. Visual Studio with the ReSharper addon, for example, will show you local variables and instance variables in different colours.

If it really matters that you differentiate between the two scopes, you can use the this. prefix to refer to the instance variable:

Without any other plugins, Visual Studio will by default help you with Intellisense: 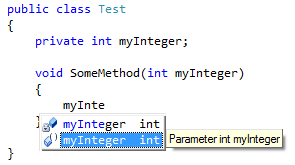 (The pop-up may still be styled by ReSharper there, but ReSharper doesn't add anything to the features of built-in Intellisense, so while the stock one might look a little different, it'll still have both options in there.)

You can also use code analysis tools like FxCop and StyleCop to help you catch potential problems with variable naming and scope.

The folks at Microsoft wrote a book called Framework Design Guidelines which explained a number of conventions, including why some things were camel cased, and others were pascal cased.

Edit (adding details from the book):

In the book, they mention doing usability studies, as well as some of the lessons-learned from acquiring the Turbo Pascal group. Also, while not all languages are case-sensitive (such as VB), others are (such as C#), so one should be consistent in one's naming. One cannot depend upon differences in case alone to distinguish items. If one sticks to the conventions used by the rest of the framework, it will lead to less confusion by devs.

camelCasing is for parameter names.
PascalCasing is for namespace, type and member names. In the event that there are 2-letter acronyms as part of the name, keep them capitalized together, such as IOStream.

Because they are pretty distinguishable as they are depending on the context they are written in.

If you get all of these types of variables confused or mixed together then you really should be thinking more about your code design to make it more readable or discoverable. Give them better and more self descriptive names than myInteger.

I can't answer your question about Microsoft's standards. If you want a standard to differentiate these things, the standard I use for PL/SQL parameters is prefixing the parameter name with in_, out_, io_, for in-, out-, and in-out- parameters. Variables that are local to a function are prefixed with a v_.

Most companies I know have coding standards that specify either an underscore or the lowercase letter m (for "member" I assume) as a prefix for their member variables.

Just as other people have pointed out, you can usually tell which is which by the scope that the item is used. You actually can't have the parameter and local variable in the same scope and if you want the private variable, just use this.myInteger. So I don't think Microsoft worried about it too much as you can easily differentiate between them if you want.

But that being said, I'm a bit surprised that no one has said this yet, but forget about Microsoft and their naming conventions (well someone might have said it by now as I had to run to a meeting and left this open without submitting it). Hungarian notation was also a naming convention started at Microsoft (or was it Xerox? I can never remember when Simonyi came up with it). I can't think of anyone that I know that doesn't curse the name of Hungarian notation to this day. We became so annoyed with it at the place that I worked that we came up with our own standard that we used internally. It made more sense to us and sped up our work a bit (it was actually pretty close to what Microsoft suggests now, but everything was pascal case with the exception of private variables).

That being said, the newer standard that Microsoft uses (the mixture of camel case and pascal case) isn't too bad. But if you and your coworkers don't like it, come up with your own set of standards (collectively is best). This of course depends on whether or not your company has a set of standards already. If they do, stick to them. Otherwise come up with what works for you and your coworkers. Just keep it logical.'

Since Aaronaught asked for citation about Charles Simonyi and Hungarian Notation: http://en.wikipedia.org/wiki/Charles_Simonyi

Last two are just examples of Hungarian notation and the ootips link is just some quotes concerning some opinions on the subject. Note that there is also system Hungarian Notation but that also, as far as I'm aware, came to popularity from Microsoft programmers (although unlike Simonyi for the apps variation, I don't know whom).

Not the answer you're looking for? Browse other questions tagged .net coding-standards naming or ask your own question.

29
How do you name your private variables in C#?
28
C# - Why are prefixes on fields discouraged?

9
How should I introduce a coding standard to my team?
0
SQL Coding Naming convention: Variable same name as Columns
0
Naming boolean fields in classes