Why isn't the line count in Visual Studio zero-based? [closed]

This just struck me as an oversight by Microsoft. Since arrays and other data-structures within the .NET framework begin from zero (zero-based) why don't we have a line 0 within the code view in Visual Studio?

Because they did a good job at separating the user model from the programming model, that's why. The same reason why most apps don't ask you, for example,

Take a lesson from that. 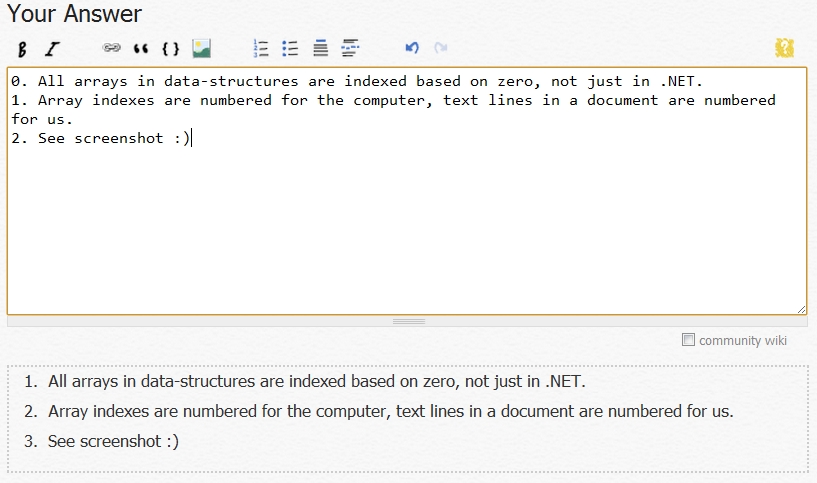 There is a difference between counting and indexing. The index can start at any number (some languages support that), but for many reasons it is most often practical to have it start at zero. Counting also starts at zero, but as soon as one does count a set that is not empty, the first element is 1, and so on.

Because it is not natural to assume that the first line is the 0th line. Much like it's not natural either that arrays first element is at 0. However that's the first number that can be used in an unsigned integer to index an array with. So instead of wasting one element we use it.

The question you have raised about line numbers is not specific to Microsoft Visual Studio. It applies to every other text editor tool, because counting lines from 1 has been adopted as a universal convention in software.

The countless other tools that count text lines from 1 include Windows Notepad, IDE text editors, text editors on Linux, Firefox's JavaScript console, compiler error messages, and so on and so forth.

While it wouldn't be wrong to count lines starting from 0, it would break the established convention and cause a massive amount of confusion to everyone involved, from the developers to the users.

A link which counters some of Dijkstra's points (in an article which is sooner or later gonna come out in this discussion).

Why numbering should start at one

Not the answer you're looking for? Browse other questions tagged .net visual-studio data-structures array or ask your own question.

6
Why do programmers use one-based indexing for line numbers in source code?
34
Why are structs/arrays zero based?

12
Is Visual Studio just an IDE?
112
Why are zero-based arrays the norm?
3
What is dependency of ASP.NET MVC on .NET Framework and how to use it with .NET 2.0?
23
Why should I use MSBuild instead of Visual Studio Solution files?
47
Understanding Visual Studio Community Edition license
0
Does F# require .NET runtime and libraries to run?
9
What is the origin of counting from zero in programming languages?
3
Why are arrays often treated as second-class citizens?