Violation of the DRY Principle

I am sure there's a name for this anti-pattern somewhere; however I am not familiar enough with the anti-pattern literature to know it.

or0 is a member function in a class. For better or worse, it's heavily dependent on class member variables. Programmer A comes along and needs functionality like or0 but rather than calling or0, Programmer A copies and renames the entire class. I'm guessing that she doesn't call or0 because, as I say, it's heavily dependent on member variables for its functionality. Or maybe she's a junior programmer and doesn't know how to call it from other code. So now we've got or0 and c0 (c for copy). I can't completely fault Programmer A for this approach--we all get under tight deadlines and we hack code to get work done.

Several programmers maintain or0 so it's now version orN. c0 is now version cN. Unfortunately most of the programmers that maintained the class containing or0 seemed to be completely unaware of c0--which is one of the strongest arguments I can think of for the wisdom of the DRY principle. And there may also have been independent maintainance of the code in c. Either way it appears that or0 and c0 were maintained independent of each other. And, joy and happiness, an error is occurring in cN that does not occur in orN.

So I have a few questions:

1.) Is there a name for this anti-pattern? I've seen this happen so often I'd find it hard to believe this is not a named anti-pattern.

a.) Fix orN to take a parameter that specifies the values of all the member variables it needs. Then modify cN to call orN with all of the needed parameters passed in.

b.) Try to manually port fixes from orN to cN. (Mind you I don't want to do this but it is a realistic possibility.)

c.) Recopy orN to cN--again, yuck but I list it for sake of completeness.

d.) Try to figure out where cN is broken and then repair it independently of orN.

Alternative a seems like the best fix in the long term but I doubt the customer will let me implement it. Never time or money to fix things right but always time and money to repair the same problem 40 or 50 times, right?

Can anyone suggest other approaches I may not have considered?

There is a reference to the WET (We Enjoy Typing) pattern but I don't know if it is a standard name.

For example, we suggest that you perform a licensing check during installation, during application startup, and whenever important features are accessed. Don't check the licence once during startup & pass that value around; instead, actually replicate the licensing check in each area. It's inconvenient, but far better than releasing a product that's easy to crack...

If I understand you properly, there is too much going on in the class. That creates methods that do not follow the single responsibility principle. Leading to code that needs to be moved around, pieces taken while others left out. This could also create a lot of members.

You should also review the accessibility modifiers. Ensure those things that are public, should in fact be public. The consumer doesn't need to know about every little member...use encapsulation.

This calls for a refactor. It also appears that code is being written with no upfront design. Look into Test Driven development. Write the code how it should be called rather than calling code however it is implemented. Look into TDD for some hints on how to accomplish the task.

Usually this is fixed through refactoring. More specifically you redirect all the calls to a new function (or a new method in a new class) that has the common code. The easiest way to start is to remove all the copied code and see what breaks, in which you fix by redirecting the calls to the common code.

Getting your customer to agree to refactor code may be difficult since it is hard to convince a non-technical person to fix a technical debt. So the next time you give time estimates, just include the time it takes to refactor to your estimates. Most of the time customers do assume you're doing clean up of the code during the time you do the fix.

Sounds like spaghetti code to me. The best fix is a refactor/rewrite.

a pejorative term for source code that has a complex and tangled control structure, especially one using many GOTOs, exceptions, threads, or other "unstructured" branching constructs. It is named such because program flow is conceptually like a bowl of spaghetti, i.e. twisted and tangled... 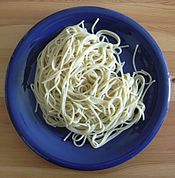 IF you ever think you have to produce awful code to meet a deadline, then the absolute highest priority request for the release after that should be to fix the awful code NOW. So your problem is gone.

The DRY principle is for situations that are not quite perfect and can be improved. Duplicating a class is a whole new caliber. I’d first call it “ duplicated code”, and over time it will change to the worst of all time wasters, “divergent duplicated code”: multiple copies of the same code that are almost, but not quite identical, and nobody knows if the differences are intended, coincidence, or bugs.

Almost a decade late to this party, but the name of this anti-pattern is Divergent Change, where multiple classes include copies of the same behavior but as time and maintenance progress and some classes are forgotten, those behaviors diverge.

Depending on what the shared behavior is and how its shared, it could instead be called Shotgun Surgery, the difference being that here a single logical feature is provided by many classes rather than a single one.

Not the answer you're looking for? Browse other questions tagged terminology anti-patterns dry or ask your own question.

176
How can I convince management to deal with technical debt?

11
Is an architecture description document a violation of the DRY Principle?
3
Is there a term for the error-handling anti-pattern of discarding all available info and just returning failure?
1
How do you wrestle the DRY principle with configs?
5
Is there a name for the anti-pattern of having low-level components controlling higher-level ones?
4
Using a one-shot class to store not-quite-global variables
6
Command Pattern vs Functional Decomposition
2
Is a god class still bad practice if it is used with mixins?
0
Is creating near duplicate partial views solely for populating html elements with Ajax returns violating DRY?
9
For-if antipattern