Does anyone have a specific example of using the Flyweight Pattern? [closed]

Ask Question
Asked 11 years ago
Modified 5 years, 5 months ago
Viewed 6k times
22
Closed. This question needs to be more focused. It is not currently accepting answers.

I have been studying design patterns and came accross the fly weight pattern. I have been trying to see opportunities to use the pattern in my applications but I am having trouble seeing how to use it. Also, what are some signs that a fly weight pattern is being used when I read other peoples code?

According to the definition it says:

Use sharing to support large numbers of fine-grained objects efficiently.

If I read it right Dictionaries and Hashtables could be instances of fly weights is this correct?

One example is in the Java libraries. Java has primitive types (e.g. int, which is a 32-bit integer) and wrappers for them (e.g. Integer, which wraps int). There are methods to "box" an int into an Integer and unbox an Integer into an int. The wrappers are necessary because the primitive types aren't objects and hence can't e.g. be used as keys in Maps or placed in Collections.

The boxing method uses an array of flyweight objects as a kind of cache for Integers corresponding to int values between -128 and 127. Since those are the values most likely to be used as keys or placed in collections, it reduces allocation and memory use. (If there are 5000000 Integers representing the value 0 floating around, that uses 5000000 times as much memory as reusing the flyweight instance).

Graphics. Typically, a raster image (which are the backbone of most consumer-level computer graphics) is CPU-cheap, but memory-expensive to work with (which is fine because memory's cheap but CPU is expensive). If that raster image is to be repeated many times in rendering a larger UI (from icons in a Windows GUI app to characters of a font in a word processor, to textures on surfaces in a 3D game), it makes a lot of sense to load the image into memory once, and simply point to it using very simple objects that are cheap to make and do not, themselves, take up a lot of memory. A sprite, which is simply a point in graphical space at which an image should be displayed, is just a 3D point and a memory pointer to the first pixel of the image to use. MAYBE it also includes the dimensions of the portion of the sprite image file to be used, either in graphical or memory terms. This information is all very inexpensive to change, say to change the image or location of the sprite, and it can be done without loading a new image each time, thus drastically increasing performance of the underlying program to manipulate and display the proper portions of the proper images to render a complete UI "scene".

The purpose on using the flyweight pattern is to avoid unnecessary object initialization and thus save space. As defined by GOF, an object can have two states, the intrinsic and the extrinsic state:

Assuming that we want to develop a simple text editor application where each column contains all the rows of the text and the row can contain characters.

By following the Flyweight pattern, the Character is now reusable and the objects are being referenced from a specific list of objects (the flyweight pool) which contains all the ASCII symbols (Character objects).

Here is what I described visually: 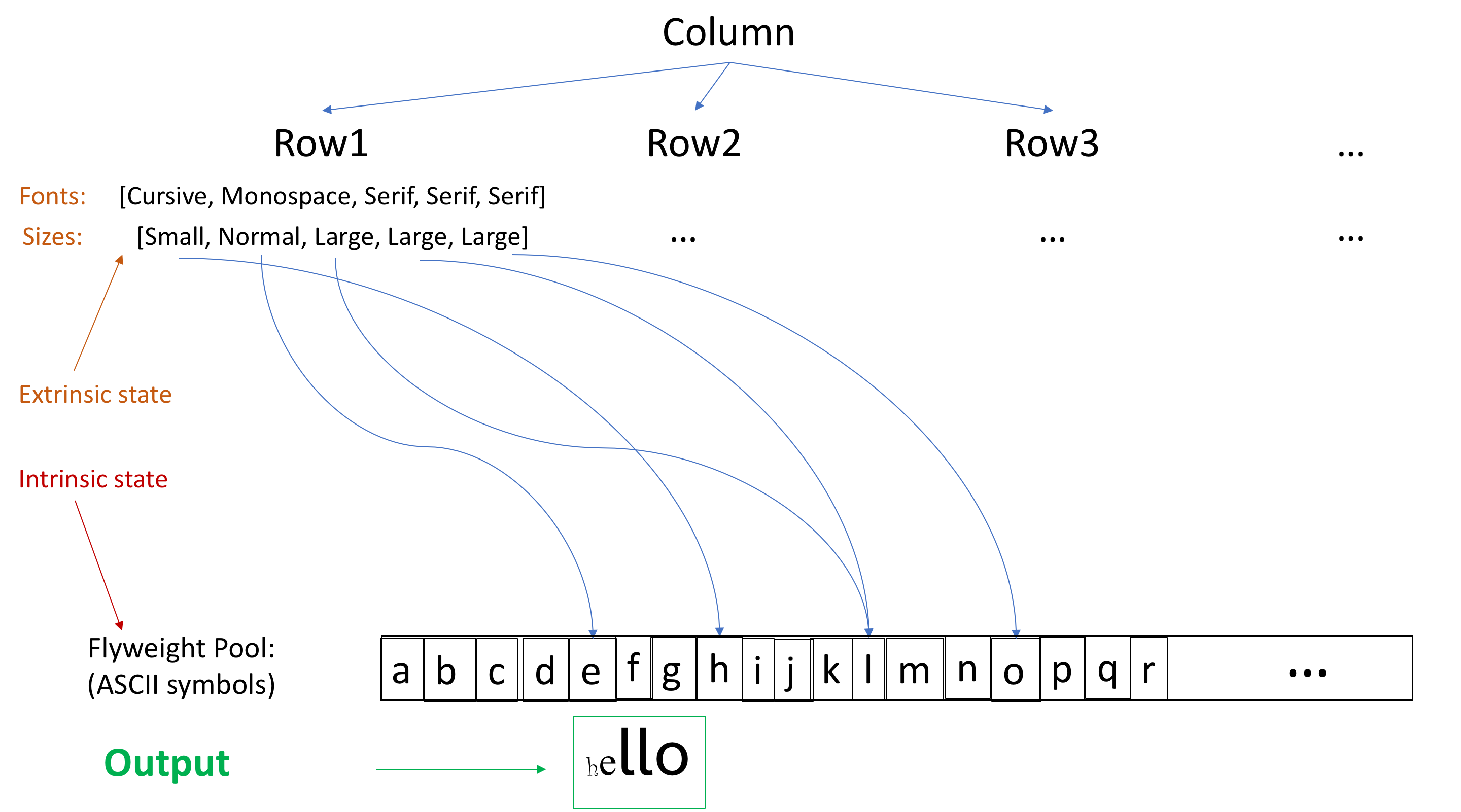 For printing 'hello', only 4 Character objects are needed, instead of 5. Once the font is changed, no new objects are required; note that this would not be possible had we stored the extrinsic state on the Character class, e.g.,

Applying this pattern on large datasets would lead to significant optimizations on the memory complexity of the application and object reusability.

When you evaluate something like Character space, Character class >> #value: executes:

So when you create a String, the ASCII-range Characters will come from CharacterTable rather than being newly-created every time.