I've recently come across Cyclomatic Complexity and I'd like to try to understand it better.

What are some practical coding examples of the different factors that go into calculating the complexity? Specifically, for the Wikipedia equation of M = E − N + 2P, I want to better understand what each of the following terms means:

I suspect that either E or N may be the number of decision points (if, else if, for, foreach, etc) in a block of code, but I'm not quite sure which is which or what the other signifies. I'm also guessing that P refers to function calls and class instantiations, but there isn't a clear definition given that I can see. If someone could shed a little more light with some clear code examples of each, it would help.

As a follow-up, does the Cyclomatic Complexity directly correlate to the number of unit tests needed for 100% path coverage? As an example, does a method with a complexity of 4 indicate that 4 unit tests are needed to cover that method?

Finally, do regular expressions affect Cyclomatic Complexity, and if so, how?

If you have a branching statement (if for example) - then you have two nodes coming out, because the state can change in two ways.

Another way to calculate the Cyclomatic Complexity Number (CCN) is to calculate how many "regions" in the execution graph you have (where "independent region" is a circle that doesn't contain other circles). In this case the CCN will be the number of independent regions plus 1 (which would be exactly the same number as the previous formula gives you).

The CCN is used for branching coverage, or path coverage, which is the same. The CCN equals to the number of different branching paths theoretically possible in a single threaded application (that may include branches like "if x < 2 and x > 5 then", but that should be caught by a good compiler as an unreachable code). You have to have at least that number of different test cases (can be more since some test cases might be repeating paths covered by previous ones, but not less assuming each case covers a single path). If you cannot cover a path with any possible test case - you found unreachable code (although you'll need to actually prove to yourself why it is unreachable, probably some nested x < 2 and x > 5 lurking somewhere).

As to regular expressions - of course they affect, as any other piece of code. However, the CCN of the regex construct is probably too high to cover in a single unit test, and you can assume that the regex engine has been tested, and ignore the expressions' branching potential for your testing needs (unless you're testing your regex engine, of course).

Some remarks on this that I idly write up...

Specifically, for the Wikipedia equation of M = E − N + 2P

That equation is very wrong.

For some reason, McCabe indeed uses it in his original paper ("A Complexity Measure", IEEE Transactions on Software Engineering, Vo.. SE-2, No.4, December 1976), but without justifying it and after actually citing the correct formula on the first page, which is

(Here, the formula elements have been relabeled)

Specifically, McCabe references the book C.Berge, Graphs and Hypergraphs (abbreviated below to G&HG). Directly from that book:

The cyclomatic number v(G) of an (undirected) graph G (which may have several disconnected components) is defined as:

A cycle is a sequence of vertices starting and ending at the same vertex, with each two consecutive vertices in the sequence adjacent to each other in the graph.

Intuitively, a set of cycles is independent if none of the cycles can be constructed from the others by superimposing the walks.

In a strongly connected graph G, the cyclomatic number is equal to the maximum number of linearly independent circuits.

A circuit is a cycle with no repetitions of vertices and edges allowed.

A directed graph is said to be strongly connected if every vertex is reachable from every other vertex by passing through the edges in their designated direction.

Note that here we passed from undirected graphs to strongly connected graphs (which are directed ... Berge doesn't make this entirely clear)

McCabe now applies the above theorem to derive a simple way to compute a “McCabe Cyclomatic Complexity Number” (CCN) thusly:

McCabe now posits (rather confusingly I might say) that the cyclomatic number of the modified instruction flow graph "conforms to our intuitive notion of 'minimum number of paths'", and so we shall use that number as complexity measure.

The cyclomatic complexity number of the modified instruction flow graph can be determined by counting the "smallest" circuits in the undirected graph. This is not particularly hard to do by man or machine, but applying the above theorem gives us an even easier way to determine it:

if one disregards the directionality of the edges.

In all cases, we just consider a single procedure, so there is only one connected component in the whole graph, and so:

In case one considers the original graph without the added "exit-to-entry" edge, one obtains simply:

Let's illustrate by using McCabe' example from his paper: 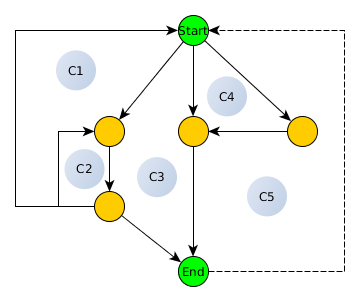 The formula for the cyclomatic number says:

The "McCabe cyclomatic complexity number" as given in his paper is

which happens to be correct (it yields v(G)) but for the wrong reasons, i.e. we use:

But is this measure any good?

In two words: Not very 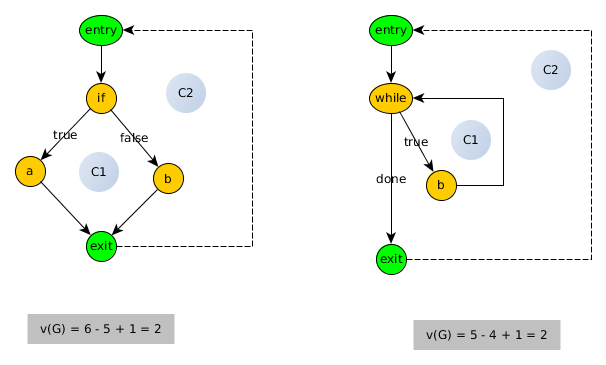 As a follow-up, does the Cyclomatic Complexity directly correlate to the number of unit tests needed for 100% path coverage?

Yes, basically. It's also a good idea to make use of cyclomatic complexity as an indicator of when to refactor. In my experience, testability and reusability greatly increase for lower CC (although you should be practical - don't over-refactor, and some methods will have high CC due to their nature - it doesn't always make sense to try and force it lower).

Finally, do regular expressions affect Cyclomatic Complexity, and if so, how?

Yes, if you want to be exact, although most code analysis tools don't seem to take them into consideration in that way. Regular expressions are just finite state machines, so I'm guessing their CC could be calculated from the FSM graph, but it would be quite a large number.

Not the answer you're looking for? Browse other questions tagged unit-testing cyclomatic-complexity or ask your own question.