Would this be a good web application architecture?

Our MVC based framework does not allow us to cache only part of our output. Ideally we want to cache all static and semi-static parts, and run dynamic parts. In addition, we need to consider data caching that reacts to database changes.

If a subtree of fragments is completely static, then I imagine that they could unfold into XML that would then be cached as the text representation of their parent element.

This process would ideally continue until we are left with a root element that contains all of the static XML, and has a couple of dynamic XML fragments that are resolved and attached to the relevant nodes of the XML tree just before the page is displayed.

In addition to separating content into dynamic and static fragments, some fragments could be dynamic and cached. A simple expiry time which propagates up through the XML fragment tree would indicate that a specific fragment should periodically be refreshed. A newspaper section or front page does not need to be updated each second. Minutes or sometimes even longer is sufficient.

Other fragments would be dynamic and uncached. Typically too many articles are viewed for them to be cached - the cache would overflow. Some individual articles may be cached if they are extremely popular.

The folding mechanism could be to be smart enough to judge when it would be more profitable to fold a dynamic cached fragment and propagate the expiry date to the parent fragment, or to keep it separate and simply attach to the XML tree when resolving the page.

A set of pure XML with an ordered array of fragment objects (that each store the identifying information of the node to which they should be attached), can be resolved in a fairly simple way by walking the XML tree, and merging the data from the fragments.

Because it is not necessary to parse and construct the entire tree in memory before attaching nodes, processing should be fairly fast.

The identifiers of each fragment would be a combination of relevant identity data and the type of fragment object. Cached parent fragments would contain references to these identifiers, in order to then either pull them from the fragment cache, or to run their code.

The controller's responsibility is reduced to making changes to the database, and telling the root XML fragment object to render itself.

I would just like to make it clear that while I say XML, what I really mean is XHTML. The design generates and folds XHTML from the very start, without trying to add an additional step to transform the XML to XHTML. It's just functionally equivalent to XML. 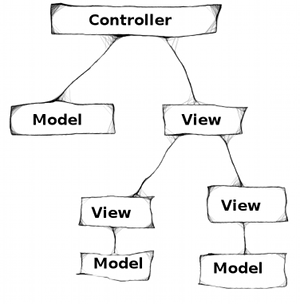 The design is still essentially MVC. Traditionally in Web applications, controllers make changes to models directly, then load all the data from models, and send it to the view.

The problem with this is that it's hard to do partial page caching.

Most web applications spend most of their time in the DB. If the controller has to load the data from models each time, then caching the view has no point, unless you cache the whole view and do no database queries.

However, in Smalltalk, where the MVC pattern originally came from, views pulled data from models directly. "The view gets its own data from the model." - MVC on Wikipedia

If views pull their data from the models, and views are composed of other views, then it becomes trivial to cache the output of views. If it does not need loading again, then it doesn't load, and it doesn't contact the DB.

I am treating view output as XML/XHTML because we have a couple of tools that allow us to manipulate XML quite well, making the interweaving of static and dynamic fragments fairly simple.

My question has two parts:

This sounds suspiciously like you're trying to invent output caching. I definitely wouldn't agree that it's hard to do partial page caching in MVC, it's just that you would need to use partial Views with their own Controller actions to do it as opposed to having the View itself call its sub-Views, which can be slightly counter-intuitive. (So in ASP.net MVC you'd want to use Html.RenderAction as opposed to Html.RenderPartial). There's a name for this particular pattern that is currently escaping my recollection.

Realistically you should be trying to separate layers away from knowledge of other layers, as the less knowledge each layer has of another the easier it is to change a layer (i.e. switch DB, add a transparent data caching layer, move a DB call across to a web service, etc.).

I would suggest that if you're going to implement such an idea, and there isn't a native output caching system in your MVC-framework-of-choice, that you add the caching layer to the Controller actions. Unless you've got some VERY heavyweight Views that need to do large amounts of recursive rendering of Models (something that's very rare) the actual HTML generation time is miniscule compared to DB calls and client network latency, so take a more pragmatic approach and cache where you need to cache, i.e. in the application layer.

If you really need custom output caching then you probably want to just slip in a caching layer above your Controller actions with either a wrapping class (if you're using a dynamic language) or a different implementation of an interface (if in a static language) that can hijack the calls to the Action and react accordingly.

As for caching that reacts to DB changes, you'd be better off with a caching layer that takes into account both loading and saving in your repository class, with each save call flushing the cache (or part of the cached set) and each load being gracefully degraded from cache to DB when needed (i.e. use the cache when the cached data is available). That way you keep the database driven behaviour close to the database.

Not the answer you're looking for? Browse other questions tagged design architecture web-applications xml caching or ask your own question.

7
How to handle complex views (consisting of several parts) in MVC web application
1
Are there any concerns with using a static read-only unit of work so that it behaves like a cache?
31
Dealing with browser cache in single-page apps
6
Where in an MVC web application should writing files locally go?
3
Do application-level caches belong inside web servers?
2
Architecture of gui application
0
Pattern for web service response caching, but only use the cache for when the data store goes down or request otherwise would fail
1
Is this a valid site architecture?
1
Uncertain of cache solutions for CAD models