How do I do TDD on embedded devices?

I'm not new to programming and I've even worked with some low level C and ASM on AVR, but I really can't get my head around a larger-scale embedded C project.

I wanted to get more into some low level programming, but I really have no idea how to approach this, since it looks like a completely different mindset that I'm used to. I don't have trouble understanding pointer arithmetics, or how allocating memory works, but when I see how complex C/C++ code looks compared to Ruby, it just seems impossibly hard.

Since I already ordered myself an Arduino board, I'd love to get more into some low level C and really understand how to do things properly, but it seems like none of the rules of high level languages apply.

First off, you should know that trying to understand code you didn't write is 5x harder than writing it yourself. You can learn C by reading production code, but it's going to take a lot longer than learning by doing.

It's a skill; you get better at it. Most C programmers don't understand how people use Ruby, but that doesn't mean they can't.

Well, there are books on the subject: 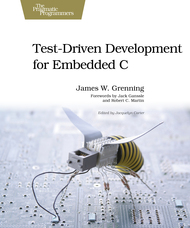 If a bumblebee can do it, you can too!

Keep in mind that applying practices from other languages usually doesn't work. TDD is pretty universal though.

A large variety of answers here... mostly addressing the issue in a variety of ways.

I've been writing embedded low level software and firmware for over 25 years in a variety of languages - mostly C (but with diversions into Ada, Occam2, PL/M, and a variety of assemblers along the way).

After a long period of thought and trial and error, I have settled into a method that gets results fairly quickly and is fairly easy to create test wrappers and harnesses (where they ADD VALUE!)

The above approach is easily extended so you can have things like communication stacks added that run asynchronously and comms messages can then be delivered to the applications (you add a new function to each which is the "rx_message_handler" and you write a message dispatcher which figures out which application to dispatch to).

This approach works for pretty much any communication system you care to name - it can (and has done) work for many proprietary systems, open standards comms systems, it even works for TCP/IP stacks.

It also has the advantage of being built up in modular pieces with well defined interfaces. You can pull pieces in and out at any time, substitute different pieces. At each point along the way you can add test harness or handlers which build upon the known good lower layer parts (the stuff below). I have found that roughly 30% to 50% of a design can benefit from adding specially written unit tests which are usually fairly easily added.

I have taken this all a step further (an idea I nicked from somebody else who has done this) and replace the HAL layer with an equivalent for PC. So for example you can use C / C++ and winforms or similar on a PC and by writing the code CAREFULLY you can emulate each interface (eg EEPROM = a disk file read into PC memory) and then run the entire embedded application on a PC. The ability to use a friendly debugging environment can save a vast amount of time and effort. Only really big projects can usually justify this amount of effort.

The above description is something that is not unique to how I do things on embedded platforms - I have come across numerous commercial organisations that do similar. The way its done is usually vastly different in implementation but the principles are frequently much the same.

I hope the above gives a bit of a flavour... this approach works for small embedded systems that run in a few kB with aggressive battery management through to monsters of 100K or more source lines that run permanently powered. If you run "embedded" on a big OS like Windows CE or so on then all the above is completely immaterial. But that's not REAL embedded programming, anyhow.

Code that has a long history of incremental development and optimizations for multiple platforms, such as the examples you picked, is usually harder to read.

The thing about C is that it is actually capable of spanning platforms over a massive range of API richness and hardware performance (and lack thereof). MacVim ran responsively on machines with over 1000X less memory and processor performance than a typical smartphone today. Can your Ruby code? That's one of the reasons it might look simpler than the mature C examples you picked.

I'm in the reverse position of having spent most of the last 9 years as a C programmer, and recently working on some Ruby on Rails front-ends.

The stuff I work on in C is mostly medium sized custom systems for controlling automated warehouses (typical cost of a few hundred thousand pounds, upto a couple of million). Example functionality is a custom in-memory database, interfacing to machinery with some short response-time requirements and higher level management of warehouse workflow.

I can say first of all, we don't do any TDD. I've tried on a number of occasions introducing unit tests, but in C it is more trouble than it's worth - at least when developing custom software. But I would say TDD is far less needed in C than Ruby. Mainly, that is just because C is compiled, and if it compiles without warnings, you've already done a fairly similar amount of testing to the rspec auto-generated scaffolding tests in Rails. Ruby without unit tests is not feasible.

But what I would say is that C doesn't have to be as hard as some people make it. Much of the C standard library is a mess of incomprehensible function names and lots of C programs follow this convention. I'm glad to say we don't, and in fact have a lot of wrappers for standard library functionality (ST_Copy instead of strncpy, ST_PatternMatch instead of regcomp/regexec, CHARSET_Convert instead of iconv_open/iconv/iconv_close and so on). Our in-house C code reads better to me than most other stuff I've read.

But when you say rules from other higher level languages don't seem to apply, I would disagree. A lot of good C code 'feels' object oriented. You often see a pattern of initialising a handle to a resource, calling some functions passing the handle as an argument, and eventually releasing the resource. Indeed, the design principles of object oriented programming largely came from the good things people were doing in procedural languages.

The times when C gets really complicated are often when doing things like device drivers and OS kernels which are just fundamentally very low-level. When you're writing a higher level system, you can also use the higher level features of C and avoid the low level complexity.

One very interesting thing you may want to have a look through is the C source-code for Ruby. In the Ruby API docs (http://www.ruby-doc.org/core-1.9.3/) you can click and see the source code for the various methods. The interesting thing is this code looks quite nice and elegant - it doesn't look as complex as you might imagine.

There is no reason why you can't. The problem is that there may not be nice "off-the-shelf" unit testing frameworks like you have in other types of development. That's OK. It just means that you have to take a "roll-your-own" approach to testing.

For instance you may have to program instrumentation to produce "fake inputs" for your A/D converters or maybe you'll have to generate a stream of "fake data" for your embedded device to respond to.

If you encounter resistance to using the word "TDD" call it "DVT" (design verification test) that will make the EE's more comfortable with the idea.

So I decided to integrate functions of their bootloader into ours. Because it was commercial code, I had to make sure that all things worked as expected. So I modified QEMU to emulate IP blocks of that CPU (not all, only those that touch the bootloader), and add code to QEMU to "printf" all read/write to registers that control stuff like the PLL, UART, SRAM controller and so on. Then I upgraded our bootloader to support this CPU, and after that compared the output that give our bootloader and their on emulator, this helps me catch several bugs. It was written partly in ARM assembler, partly in C. Also after that modified QEMU helped me catch one bug, that I could not catch using JTAG and a real ARM CPU.

So even with C and assembler you can use tests.

Yes it is possible to do TDD on embedded software. The people telling it is not possible, not relevant, or not applicable are not correct. There is serious value to be gained from TDD in embedded as with any software.

They best way to do it though is not to run your tests on the target but to abstract your hardware dependencies and compile and run on your host PC.

When you're doing TDD, you'll be creating and running a lot of tests. You need software to help you do this. You want a test framework to that makes it quick and easy to do this, with automatic test discovery and mock generation.

The best option for C right now is Ceedling. Here is a post about I wrote about it:

And it's built in Ruby! You don't need to know any Ruby to use it though.

Not the answer you're looking for? Browse other questions tagged c tdd embedded-systems or ask your own question.

36
Has test driven development (TDD) actually benefited a real world project?
1
Implementing a simple controller in embedded C
1
BDD/TDD - exhaustively testing details which are low-level, but still behaviour
15
Is creating the objects you think you will need ok in a first test in TDD
1
Should BDD/Gherkin be used only for user visible behaviour?
2
How can Behavior-Driven Development be a form of Testing-Driven Development/Unit Testing?