Does waterfall require code complete before QA steps in?

The process used at a certain company consists of:

The agile development environments I have worked in allow, if not demand, early QA inspection and early user acceptance. So, pieces of the program can be refined and redefined before the entire application is in place.

Not only that, but the process leaves little room for error or people changing their minds. Instead, those "change requests" come in at the last stage when they do the most damage. And being that a bug-fix's cost increases over time, this is a costly way to write code.

I am no waterfall expert. As described, is this waterfall being mishandled in some way? How does waterfall address my concerns?

The use of the Waterfall methodology, as it is described on the Wikipedia article, on any project of significant scale, is a risky endeavour. In the commonly taught waterfall methodology, testing happens at the very end. There is no discussion (that I am aware of, anyway) of verification or validation happening prior to the "testing" phase. However, the commonly taught Waterfall method is an example of how not to build software systems, and comes from a paper by Winston Royce, where it is described as:

I believe in this concept, but the implementation described above is risky and invites failure. The problem is illustrated in Figure 4. The testing phase which occurs at the end of the development cycle is the first event for which timing, storage, input/output transfers, etc., are experienced as distinguished from analyzed. These phenomena are not precisely analyzable. They are not the solutions to the standard partial differential equations of mathematical physics for instance. Yet if these phenomena fail to satisfy the various external constraints, then invariably a major redesign is required. A simple octal patch or redo of some isolated code will not fix these kinds of difficulties. The required design changes are likely to be so disruptive that the software requirements upon which the design is based and which provides the rationale for everything are violated. Either the requirements must be modified, or a substantial change in the design is required. In effect the development process has returned to the origin and one can expect up to a lO0-percent overrun in schedule and/or costs.

Figure 10 in the paper I linked to is Royce's proposed model of software development, which explicitly includes requirements, design, and implementation reviews. I would suspect that a quality assurance team would be involved in these reviews, to some extent. And in addition to involving quality assurance, the customer is even involved (as appropriate) in the development process at all phases, which is contrary to the Waterfall model traditionally taught.

Now, plan-driven methodologies (like Royce's proposed methodology) are not wrong or bad, when used in the appropriate instances. For example, in a project with volatile requirements, they aren't the best option, and it sounds like this is your case. So yes, when you don't know for sure what you need to build or change is likely, using a plan-driven methodology is costly for the reasons maple_shaft wrote in his answer.

This seems pretty true to the traditional Waterfall methodology and you already mentioned a significant drawback of Waterfall in that the relative cost of a bug or missed requirement exponentially increases over the course of the project: 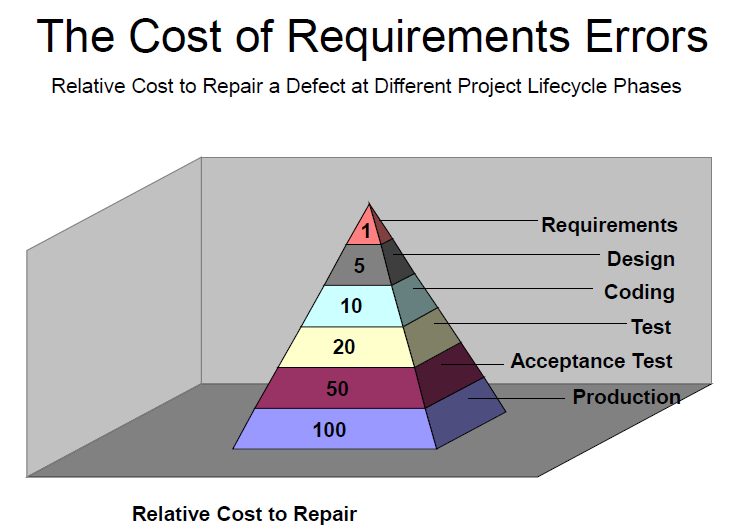 The way to minimize this in Waterfall development is to provide regular status updates with BA/QA throughout the course of the project so if they see something going astray then they can call it out earlier before it has a chance of being a bug or missed requirement later in the SDLC.

Perhaps giving a simple yes/no is the desired answer for this question, but I just can't do it.

The thing about Waterfall is that it looks great on paper but almost never manages to match with the reality of human behavior.

You allude to having some familiarity with Agile, and you point out issues occuring from people changing their minds, so I assume you have some familiarity with this problem. Software development is not similar enough to bridge-building to proceed in a nice, orderly fashion from Step 1 to Step 2 to Step 3. We learn more as we go, customers' ideas grow and mature, priorities change.

So given that, I'll say theoretically yes, according to the rigid and often impractical process outlined by Waterfall, code is complete before going to test. In reality, though, this often just doesn't work and leads to much gnashing of teeth.

Not the answer you're looking for? Browse other questions tagged agile waterfall or ask your own question.

10
Where should code refactoring and optimization fit within both an agile and waterfall process timeline?
5
Do gantt charts have a role in agile software development?
7
agile / scrum and functional specs
15
Does pair programming remove the need of code reviews in an Extreme Programming (XP) project?
7
Less strict separation of design and implementation phases for our domain
4
How should we quote differing sized contracts in a SCRUM environment
2
Does agile agree with traditional software development lifecycle
2
How should production support be handled in Agile/Scrum?