When to do code reviews when doing continuous integration?

So the question is, when do we do the code reviews?

We can't do it before we check in the code, because that would slow down the process where we will not be able to do daily checkins, let alone multiple checkins per day.

Also, if the code we are checking in merely compiles but is not feature complete, doing a code review then is pointless, as most code reviews are best done as the feature is finalized. Does this mean we should do code reviews when a feature is completed, but that unreviewed code will get into the repository?

IMO, you should review code before it gets published to mainline so that mainline only ever has the highest quality code.

OTOH, a good point could be made that 'why bother reviewing if the CI test automation hasn't run on it?', so perhaps the best would be to give developers each a private branch that the CI server will build and test for them. That way they first commit and push there, then once it passes get it reviewed, then merge to mainline (where it will get another run through the CI server).

You should definitely review non feature-complete code to make sure that scaffolding for future features is in place, or at least that there's nothing being put in that would prevent said future features from being implemented.

Also, note that code reviews don't have to be slow, or synchronous - a tool like gerrit or reviewboard or the like can make them asynchronous and fairly painless.

(Full disclosure: I used to work for SmartBear, makers of Code Collaborator, a code review tool)

All of the code is reviewed as it is being typed without extending the process or introducing another step.

Here is the extract from continuous delivery author:

I am currently writing a blog post on this topic. The short answer is this:

To summarize: code review is good. So good, we should be doing it continuously, through pair programming and reviewing commits. If a senior dev finds a bad commit, she should pair with the person who committed it to help them fix the problem.

Gating merge to mainline on a formal review is bad, and creating branches to do so is extra bad, for the same reason that feature branches are bad.

I don't know if it is the best way to do it... but I'll explain how we do it. One or more developers work on a given branch and commit their code as often as they can in order to avoid wasting time on merge that would not have happened otherwise. Only when the code is ready is it committed into the head. Now that's for the commits and branch/head thing.

As for the code review, we use Sonar as our continuous integration tool (and Maven/Jenkins for interacting with Sonar) for providing us with fresh test results, code coverage, and automatic code review every morning (builds are done nightly) so that we developers can spend a maximum of one hour every morning to fix their problems/code smells. Each developer takes responsibility (being proud too!) for the feature he is writing. Now, that's automatic code review, which is great to find potential technical/architectural problems, but what is more important is to test if these new implemented features are doing what the the business wants them to do, properly.

And for that, there are two things: integration tests and peer code review. Integration tests help in being reasonable confident that the new code does not break the existing code. As for the peer code review, we are doing it on friday afternoons, which is a bit more relaxed time to do that :-) Each developer is assigned to a branch he does not work on, takes some time to read the requirements of the new feature first, and then checks what has been done. His most important job is to make sure that the new code works as expected given the requirements, does not break our own "rules" (use this object for that, and not that one), is easy to read, and that it allows for easy extension.

So we have two code reviews, one automatic and one "human" and we try to avoid committing unreviewed code into the HEAD branch. Now... It does happen sometimes for various reasons, we're far from perfect, but we try to keep a fair balance between quality and cost (time!)

@pjz provides a good answer too, and he mentions code review tools. I'never used any, so I can't say anything about that... although I have been tempted in the past to work with Crucible since we're already using JIRA.

I think the main concept that will help is that of a "Staging" area.

Yes, you don't want to check in code that's broken. But you also should be checking in code frequently. Does this imply perfection? ;) No. Just use multiple areas and a DVCS like git.
This way you make changes (locally) and commit them frequently as you test and develop until the tests pass. Then you push to a staging area for code review.

You should then be pushing from Staging to other QA efforts such as browser tests and user tests. Finally you may go to a volume testing area, then finally production.

There are also workflows within this such as everyone working on the main branch or using individual branches for all efforts.

Continuous integration itself can also happen at multiple levels. It can be local to a developers machine 'until the tests pass' and it can also be in staging and qa areas for when code goes to them.

Why you combined them?

We use git flow for our repositories, and we do our code reviews when it comes to merging into the develop branch.

Anything in develop is complete, deployable and code reviewed.

We also have CI set up for our develop and master branches.

If you use a DVCS you can tier the integration process so that code already makes it reviewed before it arrives to the CI server. If you don't have a DVCS, well, the code will arrive your CI server before reviewed unless code-reviewers review the code on each developers' machine before they submit their changes.

A first way to do it, specially if you don't have repository management software that can help publish personal repositories (e.g. bitbucket, github, rhodecode), is to have hierarchical integration roles. In the following diagrams, you can have lieutenants review developers' work, and have the dictator as the main integrator reviewing how lieutenants merged the work. 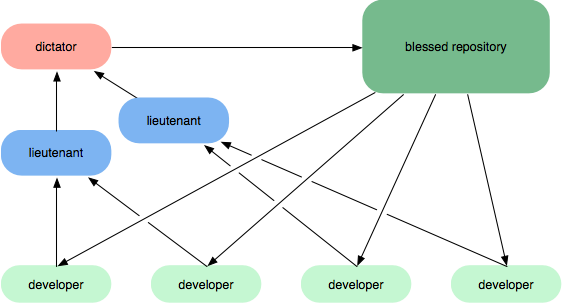 Another way to do it if you have repository management software, is to use a workflow like the following:

Repository management software typically helps emit notifications when there is activity in repositories (e.g. email, rss) as well as allowing pull-requests. Code-review can organically happen during pull requests, as pull requests typically make people engage in conversations to have the code integrated. Take this public pull-request as example. The integration manager can actually not allow code to arrive to the blessed repository (aka "central repository") if the code needs to be corrected.

Most importantly, with a DVCS you can still support a centralized workflow, you don't need to have another fancy-awesome workflow if you don't want to... but with a DVCS you can separate a central development repository from the CI server and give someone the authority to push the changes from the dev repo to the CI repo once a code-review session has been done.

P.S.: Credit for the images go to git-scm.com

Why not have more than one repository? One for "daily" work, driving a continuous integration server, running all the unit tests & integration tests to get the nice tight feedback loop, and another for "stable" work, where commits are less frequent, but have to go through review.

Depending on the path that changes take as they move through the system, this can end up being a bit of a complex solution, and might work best when using tools like Git, or Mercurial Queues, (caveat: I have used neither in anger) but lots of organizations do something similar.

Does this mean we should do code reviews when a feature is completed, but that unreviewed code will get into the repository?

Well above is the way I've seen it done in at least three projects that were intensively using continuous integration and per my recollection it worked like a charm. This practice is known as post-commit code reviews - search web for this term if you're interested in details.

First, we should clarify the concept of "continuous integration". In traditional developing methods, continuous integration means we can integrate and build our source code repository everyday, which will avoid the pitfalls of "integration hell". The code reviews are always between the period of Coding and Unit testing. We must guarantee the code merging to the branch can compile with no errors. There seldom has the situation that parts of the feature merges to the branch because it is difficult to handle the coherence of interface and compile errors.

Return to the question. There has not standard answer for when to do code reviews, and it depends on your original development process and the actual implementation of your continuous integration.

70
Review before or after code commit, which is better?