I'm putting together a spec for a REST service, part of which will incorporate the ability to throttle users service-wide and on groups of, or on individual, resources. Equally, time-outs for these would be configurable per resource/group/service.

I'm just looking through the HTTP 1.1 spec and trying to decide how I will communicate to a client that a request will not be fulfilled because they've reached their limit.

Initially I figured that client code 403 - Forbidden was the one, but this, from the spec:

Authorization will not help and the request SHOULD NOT be repeated

It actually appears that 503 - Service Unavailable is a better one to use - since it allows for the communication of a retry time through the use of the Retry-After header.

It's possible that in the future I might look to support 'purchasing' more requests via eCommerce (in which case it would be nice if client code 402 - Payment Required had been finalized!) - but I figure that this could equally be squeezed into a 503 response too.

Which do you think I should use? Or is there another I've not considered?

The user has sent too many requests in a given amount of time. Intended for use with rate limiting schemes. This code has been accepted in RFC 6585 Additional HTTP Status Codes. 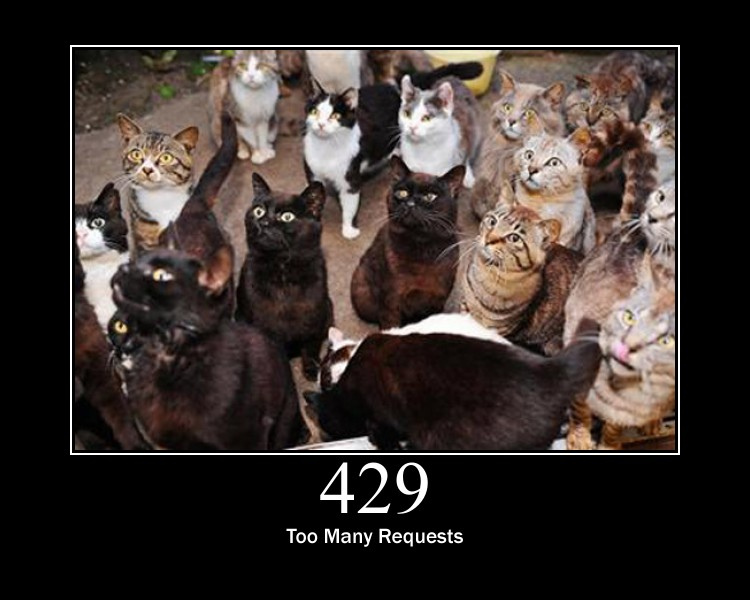 To an extent, you're free to do what you like with the codes, but I would agree that you can use 503, or if you want 402, without anyone being able to complain that you are breaking things.

Edit: A purist might say that you should start with 503, then switch once it's possible to make payments.

An excellent addition to this in the comments:

A 4xx indicates an error by the client that can be fixed by them taking a certain action, whereas a 5xx indicates a problem on the server that the client can't help resolve. So in your case, a 4xx is more appropriate, because the (i) the server is behaving exactly as it should, and (ii) the client can "fix" the error by either slowing down or purchasing more credits. The exact resolution can be indicated in the body of the 429 response. – Mike Chamberlain 7 hours ago

Not the answer you're looking for? Browse other questions tagged web-services rest http or ask your own question.