Ask Question
Asked 10 years, 7 months ago
Modified 8 years ago
Viewed 76k times
68
votes
Want to improve this post? Provide detailed answers to this question, including citations and an explanation of why your answer is correct. Answers without enough detail may be edited or deleted.
As it currently stands, this question is not a good fit for our Q&A format. We expect answers to be supported by facts, references, or expertise, but this question will likely solicit debate, arguments, polling, or extended discussion. If you feel that this question can be improved and possibly reopened, visit the help center for guidance.
Closed 9 years ago.
Locked. This question and its answers are locked because the question is off-topic but has historical significance. It is not currently accepting new answers or interactions.

I am aware of several tools/services that provide DVCS browsing and management such as Bitbucket, Github, Kiln, SCM-Manager and Rhodecode.

However, the use case I am considering is one such that:

Of these, only SCM-Manager and RhodeCode come close as they can be installed on your own servers and are open source. However they do not have the Bitbucket or Github experience. There is no issue tracker or wiki and the UI, while functional, is not up to par with Github or Bitbucket.

I can get close with Trac or Redmine with their repository browsers but unfortunately they do not have any repository management capabilities.

Are there other open source tools out there that would provide a similar experience to Bitbucket, Github or Kiln?

I would take a look at Fossil. It is the system the developers of sqlite use, internally, apparently. It also uses sqlite, which is a good solid technology... that is nice and portable - as well as simple and reliable.

It has a good, if austere user-interface (which i think behooves the nature of a productivity-oriented goal such as you describe). ((Be sure to check out the "grey" theme. It is way less "router-admin" than the default "theme", if you could call it that.)) I was drawn to it because of its roots as a CGI based system, cause I'm a sucker for CGI. The results of that heritage are actually very interesting, as this system has a very unique, JSON-ONLY mode which has all sorts of interesting implementation-possibilities..

They mention it - but it's worth repeating that it has 0 dependencies. No php, no mySQL, no python. Nada. It's its own binary executable - and it works on many platforms. I wish more projects "thought" the same way.

I am not affiliated with them, so will simply quote their opening page extolations, which generally, I agree with.. also take a look at questions & criticisms..

Web Interface - Fossil has a built-in and easy-to-use web interface that simplifies project tracking and promotes situational awareness. Simply type "fossil ui" from within any check-out and Fossil automatically opens your web browser in a page that gives detailed graphical history and status information on that project.

Self-Contained - Fossil is a single stand-alone executable that contains everything needed to do configuration management. Installation is trivial: simply download a precompiled binary for Linux, Mac, or Windows and put it on your $PATH. Easy-to-compile source code is available for users on other platforms. Fossil sources are also mostly self-contained, requiring only the "zlib" library and the standard C library to build.

Simple Networking - Fossil uses plain old HTTP (with proxy support) for all network communications, meaning that it works fine from behind restrictive firewalls. The protocol is bandwidth efficient to the point that Fossil can be used comfortably over a dial-up internet connection.

CGI Enabled - No server is required to use fossil. But a server does make collaboration easier. Fossil supports three different yet simple server configurations. The most popular is a 2-line CGI script. This is the approach used by the self-hosting fossil repositories.

Robust & Reliable - Fossil stores content using an enduring file format in an SQLite database so that transactions are atomic even if interrupted by a power loss or system crash. Furthermore, automatic self-checks verify that all aspects of the repository are consistent prior to each commit. In over three years of operation, no work has ever been lost after having been committed to a Fossil repository.

Update: Instead of alluding to the interface, here's a quick shot of it… As you can see, it's definitely simple.. But that also means a clean slate for customization.. Just a single stylesheet and a header/footer/body-type templating system. Better to write a short story than rewrite someone else's book, IMO. 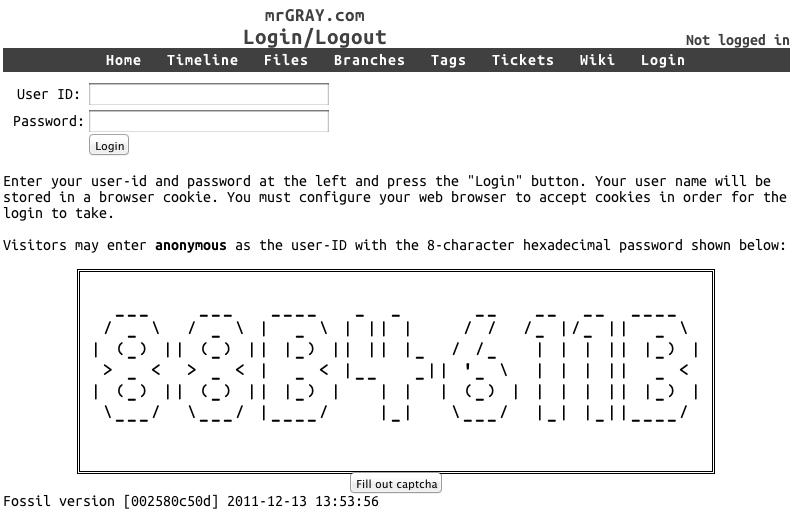 Gitorious is open source and you can install it on your own server using scripts provided by the Gitorious community edition (see http://www.getgitorious.com/installer). Gitorious now has support for wikis and issue tracking. There is also a Docker image available for quickly getting it running.

Another option would be Gitlab which is basically a GitHub clone, not as mature as gitorious but it's under heavy development with monthly releases.

You might also want to check out more options here

Your constraints are pretty specific, but I think you can get the results you seek with ChiliProject + plugins.

ChiliProject is a fork of Redmine that uses updated versions of Ruby/Rails. It supports git and mercurial very well, and replicates the Github Issues functionality it looks like you're seeking by parsing commit messages (i.e., refs 291 in a commit would link a commit to issue #291).

There are also Redmine/ChiliProject plugins that provide facilities like code review, syntax highlighting, and other niceties that Github, etc. provide that might not be obviously or readily available in open-source competitors.

There are other options, JIRA, etc., but they (IMHO) don't provide the felxibility or wealth of functionality that the ChiliProject fork of Redmine + the multitude of available plugins provide. There's not much that Github and/or BitBucket do for you that ChiliProject (possibly with freely available plugins) can't do; and the beauty is, if it doesn't already exist, it's usually fairly trivial to implement it yourself.

If this sounds like more than you need... I haven't tried it yet, but GitLab also looks interesting... it doesn't seem to have the extensibility or plugin architecture of Redmine/Chili, but if you're looking for an open-source clone of Github with most of the core feature set (and you don't need to support multiple DVCSs), it looks pretty good.

Allura http://sf.net/p/allura should fit the bill. It is the platform for all the new (or upgraded) projects at SourceForge and is open source. It supports Mercurial and wikis, plus many more tools (Git, SVN, ticket tracker, forums, etc). It doesn't quite have "code review" but does support forking and merge requests for Mercurial and Git repos.

It's written in Python and uses MongoDB and Solr for data storage.

Allura is also currently in the Apache Incubator: http://incubator.apache.org/projects/allura.html

I work for SourceForge and help develop Allura.

For the exact same issue at work we use an ecosystem composed of:

The DVCS integration in Redmine has improved by leaps and bounds in the later releases, I upgraded a few weeks ago and I am extremely pleased that most of the "gotchas" are gone.

I run the Redmine and RhodeCode servers on the same host because Redmine doesn't support remote HG repos just yet. Jenkins runs on several other hosts.

I use a RhodeCode hook to trigger mercurial pulls in Redmine. I can't use a hook for Jenkins pulls because of JENKINS-13717, but I submitted a patch for this already and I guess it will be accepted pretty fast. In the meantime I just poll the HG repos every few minutes.

Everything runs on Debian 6.0 over Nginx reverse proxying to get SSL termination (all of this is only used over SSL). Recently the whole package was moved onto a ProxMox cluster to virtualize it all with great results so far. In case you don't know the product, you should take a look at it. It's one of those "I can't believe this exists and I didn't know about it and OMG it's open source too!" kind of product. We run these services on OpenVZ containers that are easily migrated from one host to another for hardware repairs/upgrades. On the same cluster we also run a a bunch of KVM virtual machines as well for automated testing on Windows platforms.

I am extremely happy with this ecosystem. It has improved our dev/QA team's ability to reproduce issues and track changes by a huge margin. Just a few warnings:

I have no hesitations on recommending this setup as I am extremely happy with it. If you need help configuring a specific service or you want to get a look at my config files feel free to ask.

Take a look at cydra: https://github.com/mensi/cydra it has support for

It works on a project based approach which allows you to create a project and assign multiple repositories to it (at most one SVN repository). The auth is based on individual plugins (we integrated it into our ldap).

We use it for our https://code.vis.ethz.ch coding platform. At the moment there isn't any support for code review but it could easily be added as a plugin.

I can't post screenshots since I don't have enough reputation.

Consider using GitLab https://about.gitlab.com/ since it meets most of your requirements:

It also has a good issue tracker or you can link to an external issue tracker. You can test your merge requests with GitLab CI if you want to. GitLab has been growing fast and is in use by more than 25.000 organizations.

Not the answer you're looking for? Browse other questions tagged open-source web-applications dvcs free-software or ask your own question.

6
How do open source projects deal with complex setup and deployment?
13
How do I (quickly) let people know that software I am providing for free is not abandon-ware?
5
Moving from a CVCS to a DVCS in a big company, what is the right way to do it?
4
Is security a real argument for centralized version control?
5
The reason to make some code open source
7
Handling (many) multiple projects in Git in an enterprise environment
4
Can Foswiki be used as a distributed Redmine replacement?
3
Release Management Tools with DVCS (Mercurial)
3
Is a guardfile part of the private developers environment or the public OSS project?
11
Integration tests in OSS projects - how to handle 3rd parties with authentication?