What is inversion of control, and when should I use it?

I am designing a new system and I want to know what inversion of control (IOC) is, and more importantly, when to use it.

Does it have to be implemented with interfaces or can be done with classes?

IoC (see Inversion of Control on Wikipedia) is applicable in cases where a component can not perform a task entirely because it doesn't have some necessary information or functionality.

The simplest example of an IoC pattern would be callback functions in C. For example you can declare the function:

Which iterates over list applying the f function to each of it's item. The Iterator function doesn't know how each item will be processed, you just provide a function as an argument, and it processes them.

As the previous example shows, IoC allows you to decouple your program into separate components that don't know about each other. One of the most common versions of IoC is Dependecy Injection.

In Dependency Injection each component must declare a list of dependencies required to perform it's task. At runtime a special component (generally) called an IoC Container performs binding between these components. It tries to provide values for published component dependencies.

Here is an example in pseudo-code:

In this example class Foo has a constructor that requires argument of type Boo to perform some action.

You could create an instance of class Foo using code similar to this:

MyContainer - is an IoC Container, which takes care of getting instance of Boo and passing it to the Foo constructor.

In summary, IoC allows you to decouple your program into separate parts. This is good because:

However in some cases, IoC can make code harder to understand.

If you want to see good example of real-world usage of IoC, have a look at Mircosoft Composite UI Application Block and CompositeWPF

I hope my explanation helps you.

Since I dug into this myself recently, and kept all the bookmarks, the following I found invaluable for learning about IOC/DI.

Some Concepts To Know First

An excellent collection of IOC/DI Tutorials

Book on IOC/DI From Manning Press

Source and Explanation of how to create your own IOC - Cause reading source code is always the best way to understand a concept.

Basically IoC/DI will allow you to define which implementation you're using once, and keep a static copy of your container to reference each time you want to reference it.

The Wikipedia will probably help you, but I wanted to reference your second part - yes, dependency injection can be done for classes (ie, every time this class type needs to be passed to a method, use this class), but it's better to use interfaces, because that way you can change which version of a provider, repository, etc you're using just by re-referencing it in your setup.

So, you could have public List ReadPeople(IStreamReader reader) and in your setup for your IoC container tell it, every time you expect an IStreamReader use SQLStreamReader.

Then if you change your mind later, you only need to change it in the one place (the setup of your container) and it won't matter how many methods ask for an IStreamReader, it will always get the default you told your container to serve up.

I think Inversion of Control(IoC) design principle has nothing to do with Dependency Injection(DI).
You can use DI in your project and still violate IoC principle.

Inversion of Control is all about "control flow" during runtime and during design time(source code).

During design or compile time flow of control goes in same direction, because in the source code we need to tell Business project what project we need to import to call SemdEmail method. 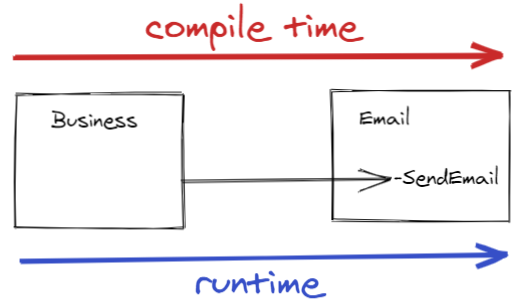 Why this is an issue?
Because now every time we make internal changes to the Email project we need to recompile all other projects which using it.

Inversion of Control principle suggests to change direction of control during compile time.
By making low level project (Email) depend on "higher" level project (Business). Then we can freely do internal changes into Email project without recompiling it's consumers.

To implement it we need to introduce an abstraction in Business project which Email project can implement. 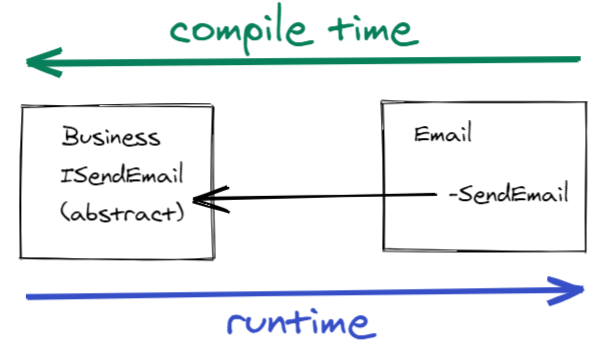 Every application has an entry point (main method), this is the place where we "glue" Business project with actual implementations.

Not the answer you're looking for? Browse other questions tagged design design-patterns inversion-of-control or ask your own question.