A decent git branching model for products that should accompany the version of another, third-party product (and pros and cons of one proposal)

Note: My question is focused in my specific problem (which involves Liferay) but I hope it can be useful for anyone who needs to maintain various versions of a same project on git.

I work on a company which writes a lot of plugins for Liferay Portal. These plugins (portlets, themes etc.) are usually reusable and, of course, should be updated for new versions of the portal.

However, it is usual to have to migrate, let us say, a portlet to a new version of Liferay and to maintain its previous version. Also, frequently we have to create very specific customizations for some clients, which does not make sense to be added to the "main version".

These requisites complicate our work but, fortunately, we can assume some simplifications. For example, the plugins are frequently updated by only one programmer at a time. It is very rare to have two or more features being added to a plugin at the same time.

Now, we are migrating to Gitorious. We are trying to conceive a branching model for such a scenario.

What I proposed was:

This is an unusual model: it would have no master and a lot of not-merging branches. This is how I suppose a repository with such model would look like: 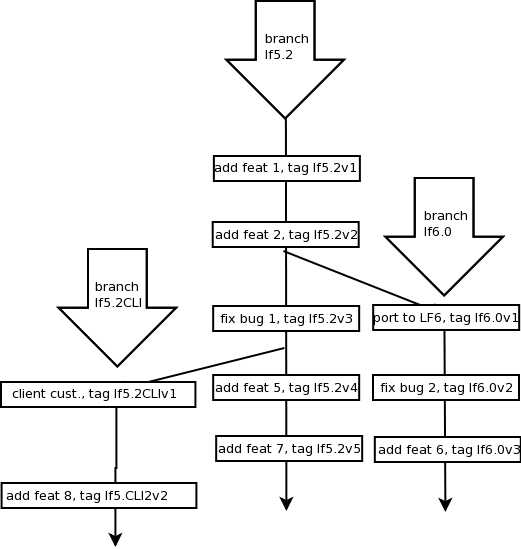 A friend found this system rather complex and error-prone. He suggested the excellent and popular Vincent Driessen model, which I found still harder to manage and discipline-demander. It is great (and tested!) of course but seems too complex to our situation.

Then he suggested another model: we would have a repository for each plugin in a Liferay version (so we would start creating a kittens-lf5.2-portlet and then a kittens-lf6.0-portlet), each one with a master branch and a develop branch. The master would be always ready for deployment. (Or it could be the other way around, master and stable, as suggested by Steve Losh).

This is very simple, but I did not like this system:

I suspect the two last points - which are the two more subjective ones, too - are the main reason for my unwillingness. Nonetheless, all four objections stand.

OTOH, my own proposal seems strange to myself and I wonder if there is hidden bugs on it. OT3rdH git is so powerful and flexible that I think I should feel no shame on exploring its possibilities.

* Actually, I would prefer to tag the commit with a version such as v1 but apparently a tag in git is not scoped in the branch - that is, I could not have a 1 v1 tag in lf5.2 and another one in lf6.0 - so I have to name the branch. Is it correct BTW?

The answer now pivots on your day to day workflow, the number of developers working on any one branch or number of changes are red herrings. I see your primary need as wanting to know what branches get a bug fix update from a main branch change and for this I think that the combined repository with branches will be more efficient since it's all in one place. Were there never any need for cross pollination then separate repositories would enforce that, but that scenario doesn't match the reality of your project as I understand it.

The Driessen model would work well if your project needed to merge branches back into the main line of development, but you do not need that. Even so I think that there is merit in maintaining an InDevelopment and StableRelease concept if you're working on a product that's live.

So to summarize I think that your project would work well with your branching model plus a dash of Driessen for your main line. Your mileage may vary; I've always worked with a "pending release " branch that turns into a "live" branch and a separate "next release" that all require cross pollination of fixes and changes at various points so my perception may be biased.

What stumps me it the fact that each portlet has it's own repository (but your story might not be complete). Personally I would create a repository per project. Projects often have multiple portlets and are all build in the same run against the same version of Liferay. Each project can be a duplicate of an existing project that build against a different version of Liferay but I would only split a product if the differences are too big. If a build works against Liferay 5.1 and 5.2 I would not split the project. I would use scripting or Maven (or both) to let everything work. I would use a Wiki (or Trello) for management of each product and with what version of Liferay it can be build against.

By the way: I am a Java programmer, Maven specialist, Build specialist and have experience with Liferay and other portal servers (IBM WebSphere and Glassfish).

2
Creating an alternative spin-off repo, being able to fetch updates from main repo (aka forking your own repo)

28
How do you put different versions of your library under version control? Do you use tags? Or branches? Or another method?
5
What is an effective git process for managing our central code library?
183
Git branching and tagging best practices
2
Under what conditions should I rebase rather than merge?
23
In git, is it a bad idea to create a tag with the same name as a deleted branch?
149
Maintain hundreds of customized branches over master branch
5
Should versions be bumped in dev branches or master branch?
0
How to reduce the merge-redundancy due to testing in our Git workflow?
0
using git, bringing old tagged releases up to date
2
How to properly manage bugfixes for released versions in git flow