Are there any statistics that show the popularity of Git versus SVN? [closed]

I'm writing an essay, and would like to have some empiric evidence, perhaps longitudinal data where the popularity of these technologies is compared over a period of some years.

Are there any statistics that show the popularity of Git versus SVN?

To add to Jan's answer, Ohloh has been crawled (only) three times by the Internet Archive's Wayback Machine, but July 2011 is unreadable, so that gives three data sets including today (plus future edits):

Note: Unlike later dates, August 2010 has separate values for Subversion and SvnSync (a Subversion read-only mirroring tool). It's fair to surmise the later Subversion figures also include the large SvnSync share.

This appears to show that, of the open source repositories registered on Ohloh, there's been a huge growth in both Git and Subversion. Whereas they were about level in 2010, there were double the number of Subversion repositories in 2012 (...indexed by Ohloh), but Git has now easily taken the lead.

Sites such as Ohloh and Github only give you an indication of what's going on in the open source world, and take no account of the (much larger) commercial/industrial/closed source side of things; Google Trends gives all sorts of other hits for "subversion" and "git" (both of which have other meanings outside the SCM world).

The best indicator you're likely to get at the moment is the Eclipse Community Survey. This is conducted every year by the Eclipse Foundation and since Eclipse users tend to be Java developers of all shapes and sizes, it targets a fairly representative cross-section of the software development community as a whole. The only problem is that Windows developers are probably under-represented, but nevertheless, it still gives a reasonable guide as to where things are at, and since it's been going for a few years now, you can start to see what trends are beginning to emerge.

Their figures for Git are: 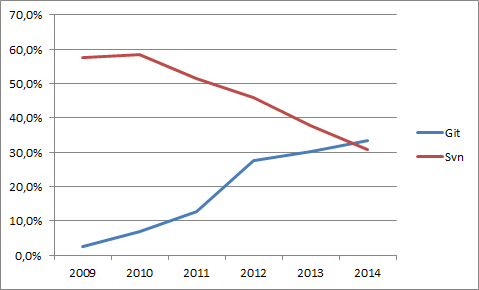 The 2012 survey report is due out in the next couple of weeks. In the meantime, another data point we can consider is the growth of Github. Back in August, I observed that it had just under a million users, though I didn't record the exact figure. This has grown to 1,654,419 users as of the time of writing: an increase of at least 66% in 288 days, or about 90% a year. If we assume that the growth of Github is indicative of the rate of increase of Git usage industry-wide (a potentially dubious assumption: see comments below), that would suggest that Git adoption is currently somewhere between 20% and 25% industry-wide, and on course to overtake Subversion to the number 1 slot sometime in the next 12-18 months or so.

Update: the results of the 2012 Eclipse Community Survey give Git/Github a total market share of 27.6%. This is much more than I was expecting (I thought it would be low 20s at best) and means that it now almost certainly has significant penetration into corporate and enterprise environments. Subversion is still in the number 1 slot for now, but given these figures, I would be very surprised indeed if this remains the case this time next year.

Update: results have been added for the 2013 Eclipse Community Survey. Git is now at about equal usage with subversion (36.3% vs 37.8% respectively), and if the trend continues it will easily be in first place next year's survey results.

Update: The results of the 2014 Eclipse Community Survey show Git (33.3%) surpassing Subversion (30.7%) as expected from the trend in the previous year.

Further to my previous answer, there are some websites out there that track demand for skills among employers. These are a useful metric because they show exactly where things are at in corporate/enterprise settings, while disregarding the open source/hobbyist market (which can be pretty fanboyish at the best of times).

(I wasn't able to find statistics for any other system e.g. CVS, SourceGear Vault etc.)

It appears that demand for Git is doubling approximately every 12-18 months and if present trends continue it will overtake Subversion round about the end of 2013 to become the most widely used source control software in corporate settings. Subversion apparently peaked about a year ago and is now gradually declining.

I think ohloh has some relevance, but I am not sure you could pry historical data from them.

Also for some specific domain, see use of vcs for Debian packagin (you could be able to pry some historical data from UDD, but probably not very long, as the Vcs-* fields are not that old).

38
Empirical Evidence of Popularity of Git and Mercurial

2
Trac/SVN to DVCS Migration
16
Workflow: Using binary document formats in Git without locks (moving from subversion)
2
Adding svn support to our git repo
25
What to do about large svn history when moving to git?
4
Switching from SVN to Git - help needed
2
Migrate an SVN repository (that was previously the merge of 2 repositories) to Git while retaining history