Is it possible to combine programming languages?

I've been programming for a while, I've written some rudimentary programs, and I want to keep learning. I've reached that point where you just don't know what to learn next, and I'd like to ask a question for my own curiosity.

The question, in a nutshell, is if you can combine multiple programming languages into 1 result? For example, can this code be possible?

This feels like a silly question but I can't possible know if it's possible or not, so that's why I'm asking it. In this question I notice he is using Python code in html code, if my above example is not possible, what did he do?

You first example is sort of possible. Usually such things happen in PHP (and other related web-programming languages) like this:

Some important points to note about this example:

Your second example looks like some sort of mash-up of C++ and Java. It's possible to have compiled modules written in different languages talk to each other, but to combine Java and C++ in the same source file would be extremely confusing and difficult: how would the compiler know which statements are Java and which are C++?

I suppose in theory you could write a special compiler/pre-processor with "language" indicators such as:

But I'm honestly not sure you'd gain anything useful by doing this.

Also, how would this hybrid language environment handle language features which are incompatible between the two?

Generally, a single source file contains code for exactly one programming language. It is uncommon for multiple languages to be combined in a single file for a couple of reasons:

Different programming languages that share a common application binary interface may be combined to form a single executable or library. Getting the two languages' signatures available inside each other often takes a bit of work, but tools exist to ease the process.

Polyglot code is valid and equivalent in more than one language. Stack Overflow's 404 page features one such program: 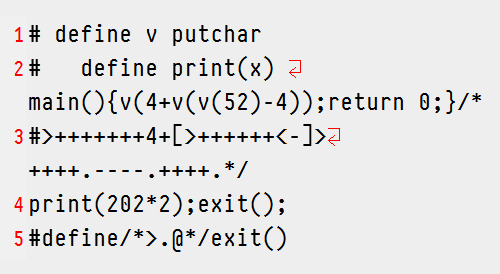 Languages are rarely mixed within files, and when they are, it is for laughs. People even try to avoid mixing languages within projects because of the extra hassle it introduces. So, while it can be technically possible, mixing different languages is neither common nor pragmatic.

Yes, it is possible indeed. Not the way you've imagined that, of course. There are some languages out there built specifically for this purpose.

In practice, it might be very useful to mix a number of domain-specific languages into a single host language. There's rarely a need in mixing two or more equally "general purpose" languages together in single source code file, although you'll often find projects written in both, say, VB.NET and C#, with different language components compiled separately.

As for HTML, it's just a markup language. You may often find a server-side code (e.g., in VB.NET), HTML markup and client-side Javascript code mixed into a single source file, although it is considered a bad practice by many.

This is often called polyglot code - there are some fun/insane examples if you follow the link or in various other places on the web. Most of these are just for fun / to prove it is possible.

More seriously, there are various real life examples where two or more different languages can be usefully combined:

It is possible to do some combination of languages using Perl Inline which allows to write a Perl script and insert sections of code written in a different language:

Embedded SQL was a common way to embed SQL statements into programs of other languages.

These days it has been replaced almost entirely by easier-to-compile API-based Database access that doesn't need to modify the host language, but use its normal abilities instead.

Several programming languages can be used to form 1 exe. One way is to use DLLs. Of course there are various concerns about this. For example, parameter compatibility, COM compatibility and such. In fact, if you think of how you call a database system to do you work, you might find that the DBMS is not always written in a language you know. You probably don't even care as long as the interface is known.

This concept is taken further when your solution utilizes Web Services, which is even a cleaner way combine multiple software components.

In the .NET world, all of the above applies, more over, on the interface level XAML and HTML interfaces can live together in Silverlight.

In the UNIX world, at one time, we used KShell scripts to launch C++ and COBOL programs so that the solution could work.

I think it would be worth mentioning Cython here. It's a superset of Python for writing C extensions and although it is really a unique language in itself, it pretty much allows you to use C code in Python code, if you conform to Cython's Python style syntax

You can "mix" languages in HTML. It's actually important to how a lot of websites work that you can embed javascript into html. But of course, HTML is markup, not a programming language.

I think to do what you propose would entail writing a new language anyway. Either you would have to create an interpreter/compiler that spoke all of those languages and could frame them consistently, or you would need some way of evaluating line by line explicitly in what would be a meta-language. Those two options are basically the same except for what the programmer has to do to make the languages work together.

Examples of combining languages: Jython (python in Java), Cog (python used as an embedded code generator in pretty much anything). I've often used Perl code to generate C++, if you count code generation.

The .NET framework is built for allowing several languages to participate in one solution. It works as long as the language can produce CLR-compatible byte code.

It is however possible to have a big project written in more than 1 language. For example, both Mozilla Firefox and MySQL have C and C++ code in them. When it comes to big projects, this practice is often used because a particular language provides some features that another does not. In PHP, for example, you can ask for the execution of a binary executable, take its result and use it in your PHP code from that point on.

If you're curious about what languages are used for some of the most important open source projects in the world, you can check out Ohloh.net. Statistics about the source code of many projects can be found there.

Language is a tool. Before choosing a tool (moreover, making some weird hummer-PC-spectroscope combination) one should ask himself - what exactly is it that I want to do?? Once the answer is given, you will find out that such kind of languages mixture is seldom necessary.

Yes, it is possible to mix programming languages so long as your interpreter/compiler can understand it. For instance mixing javascript, PHP, python in HTML or C++ in C#.

Mixing languages can make it more difficult to read and modify code, however, so it must be done cautiously. One way around this is to create separate files for code in the language you need to call and to import it rather than embed it.