What does it mean to say an algorithm is Sound and Complete?

I heard different interpretations of sound and complete. I understand that completeness means finding a solution if there is one. What does it mean to say an algorithm is sound.

What does it mean to say an algorithm is Sound and Complete?

These are very specific terms as related to logic.

Here are some starting points:

Basically, soundness (of an algorithm) means that the algorithm doesn't yield any results that are untrue. If, for instance, I have a sorting algorithm that sometimes does not return a sorted list, the algorithm is not sound.

Completeness, on the other hand, means that the algorithm addresses all possible inputs and doesn't miss any. So, if my sorting algorithm never returned an unsorted list, but simply refused to work on lists that contained the number 7, it would not be complete.

It is complete and sound if it works on all inputs (semantically valid in the world of the program) and always gets the answer right.

I find Erik Dietrich's answer a tad confusing. The following is better:

In most standard models of computation, computing problems are represented as languages. A language is a set of strings. An algorithm, then, is just a system or procedure that decides whether a given string is a member of some language (by returning true or false). In software engineering terms, computation theory is specifically concerned with functions that look like this, assuming strings are immutable:

How does this translate to other kinds of function? As it turns out, it's almost always possible to stuff an arbitrary amount of data into a string and reconstitute it inside the function. So the restriction on argument type and arity is nothing more than a theoretical simplification. The restriction on return type is more important, however. Problems which call for a boolean result are called decision problems. Much computation theory involves decision problems; the sets P and NP are restricted to decision problems (and NP, at least, couldn't be reasonably defined without this restriction). The halting problem is another example of a heavily-studied decision problem.

It's my opinion that these terms don't generalize outside the domain of decision problems, so the difference between them is not really meaningful when discussing a general function. 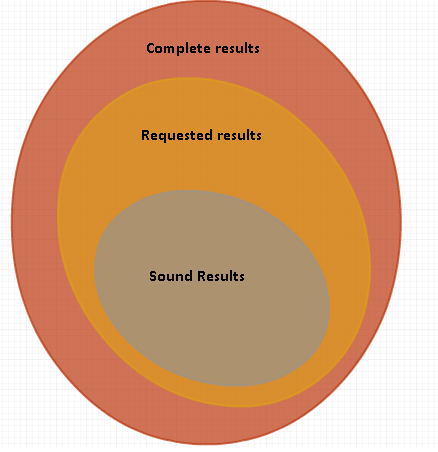 Not the answer you're looking for? Browse other questions tagged algorithms terminology or ask your own question.