How can I evaluate a candidate's knowledge of Html/CSS during an interview? [closed]

I am trying to determine some good interview questions to assess the ability of people coming in for a Html/CSS job, however that topic is extremely broad, and I'm not sure what sort of questions I can ask to properly evaluate someone's HTML/CSS knowledge.

What sort of questions can I ask to evaluate a candidate's Html/CSS abilities during an interview?

Ideally I would like to ask few questions and then give them a real life scenario to combat.

HTML and CSS are difficult to interview for a few reasons:

You may want to start by some basic questions:

What is your favorite browser?

If the person answers "Internet Explorer", stop the interview immediately: you don't need somebody like that.

No, I'm kidding. The answer is irrelevant. Instead, you can ask the following:

Tell me about the debug tools you use in your favorite browser.

Primary using Chrome, I work daily with Developer Tools. Those tools allow me to:

I also use YSlow which serves me as a checklist for optimization of a website which require high scalability. YSlow is also a good tool when it comes to determining if the server is configured correctly (sending correct headers, etc.).

In Firefox, I use Firebug, the tool very similar to Developer Tools from Chrome. Developer tools are also available in new versions of Internet Explorer, and also enable me to switch to IE7 to IE10 compatibility views. This last feature is very helpful, since without it, I would be forced to install several virtual machines just for legacy testing, or to use much more often the paid services like Litmus.

Please, explain me what <dl/> tag is about? What was the intended use for this tag? How is it used in practice? What do you think about this extended usage?

Here, you want the person to be able to explain that <dl/> is for dictionaries, associating one key, <dt/>, with one or several values, <dd/>. While the primary use of this tag was purely related to semantics, in practice it was extensively used to replace tables, a good example being PHPBB3. This is a good thing when tables are slowing the rendering of the page, but it must be used with caution: not only tables are still appropriate in lots of cases to better describe the data, but also there may be other means, such as ordinary lists, to describe the content without using <dl/>.

What is the difference between fixed and fluid layouts? What are the pros and cons of each?

The fixed layout has predefined widths of the elements. The elements of a fluid layout depend on the width of the page.

The fixed layout makes it easier to design the page, especially when there are lots of full-width graphics. Even without graphics, it's still easier, because you care only for a precise case. For example, Programmers.SE being a fixed layout website, the column which displays the questions and the answers has always the same size. If a fluid layout would be used for this column, this would create an issue: on small screens, the text would be unreadable, because the lines would be too short, while on large screens, the lines would be extremely large, so the text would be unreadable too.

The problem with the fixed layout is that it works well for a few, most used resolutions, but fails more or less for everything else. It becomes especially important since the adoption of very large, wide monitors, and the increasing usage the internet on small, mobile devices.

The fluid layout helps with that, but the design is more difficult to do for such website. In some scenarios on badly managed projects, this may lead to HTML and CSS hacks, large pages, low maintainability and, during development, to higher costs and missed deadlines.

On a page with a fluid layout, how can you avoid the situation where a column of text becomes too large to stay readable?

You can limit the width of a zone of text by using max-width property.

What do you think about this piece of code: <p color="Red" align="Center">Text here</p>?

After a few basic questions like that, you may ask some more tricky ones:

How do you avoid duplicating colors or fonts in CSS, when those colors or fonts are applied to multiple elements which cannot be targeted by a single selector? Are there drawbacks?

You do that by using CSS preprocessors, like Sass or LESS. They allow to define colors, fonts and other parts of the style inside variables that you can use later in your styles.

The drawbacks of CSS preprocessors are that:

Give me an example of a href value of an image which is on CDN, given that this image is displayed on a website which may be accessed both through HTTP and HTTPS.

Given that the size of the pages and the number of requests on a website cannot be optimized and the content cannot be changed nor AJAX be added, how do you give the impression to the user that the website is faster? What it involves from HTML perspective?

If HTTP 1.1 is used, the page may be chunked. This means that the first parts will appear faster, giving an impression that the website is faster than it is in reality. Chunked transfer encoding is impossible in HTTP 1.0, which means that there is nothing to do in this case.

Finally, you may ask the candidate to work on a real-world scenario. It may be anything, like the easiest one below, to the complex scenarios where the person has to deal with CSS sprites or other advanced optimization techniques, with browser inconsistencies, etc.

Please, can you create an XHTML page with two zones: the left one, with a list, and the right one, with text. Two zones are separated by a vertical line, which extends from the very top to the very bottom of the page. List and text varying in size, you can't predict which one will have the biggest height. You cannot use <table/>s.

Actually, it's pretty simple but shows if the person has the reflex to think about heights. An inexperienced candidate will create the float:left zone and the border-left:solid 1px #ccc; zone, but forget adding the border to the left zone and extending it so that two borders will be at the same place.

Here are some questions I would ask about CSS:

And some questions about HTML:

In general I put more emphasize on CSS since it's the area many people find difficult to grasp and to use effectively. I meet a lot of candidates that put "CSS" in their CVs but are not able to answer any questions about it. Most people just saying straight "No-no, I know CSS good enough to deal with it but not good enough to talk about it."

Sometimes it's good idea to just give a simple task for and interviewee to complete. Say, design a simple page with layout and block styling that supports multiple screen sizes and adjusts accordingly. It should take about an hour or two and the candidate should explain what he's doing and why.

If you conduct live interview, then the best way is to ask the developer to write some html/css code.

UPD: Of cource, ask the developer to write the code using divs only (without tables). 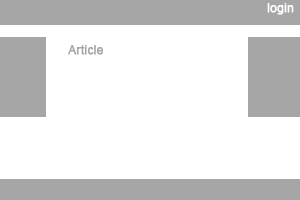 I sat in on a few web designer interviews, and what we did was print out a very simple looking Blog layout on paper, and then ask the candidate to just jot some HTML and/or CSS on the page over 10min or so, to give us a basic idea of how they'd code it up. This let us know if someone ACTUALLY knew CSS or not. We were just looking for basic stuff like floats vs tables, or whatever, and we explained that it didn't have to be perfect by any means.

Tons of folks claimed years of experience with CSS, but when pressed to write it out, they were writing in wild guesses like "layout: floating; direction: up;" or other such jibberish. More than 1 "CSS Ninja" didn't even get the syntax right, a la "div(margin=5)". That was very eye opening for me, to see how many people just straight up lie in interviews. And its seemingly easier to lie about CSS than about straight up coding. You could not know a thing about CSS, but do some googling and be able to throw the proper terminology around pretty quickly. You can't really do that effectively with higher level concepts like OOP, for example.

There is an online test in which you must list the HTML Tags or the CSS Properties in 5 minutes.

Although this is not a fullproof test, this can let you know if the candidate is familiar enough with HTML/CSS.

About the question, you could make a test with sample code and ask him to detect syntax / structure errors.

As for the real life scenario, it all depends on what the candidate will work on in your company. If you want just a front end dev, you can ask for a website design on a random topic.

One type of test which is applicable to programming languages and markup languages is a code review. Create a small sample (20 or 30 lines) with a mixture of syntax errors, logic errors, corner cases, arguably bad style... Then ask the candidate to identify anything which strikes them as suspicious.

It's important to use this kind of test correctly: as with any interview question, the way the candidate approaches the task is important, and not just the results.

I'm not going to post my test, but some hints for how to apply this to CSS:

I'd recommend a mock test/prototype based on the realistic experience of your company's needs.

Not the answer you're looking for? Browse other questions tagged web-development html css or ask your own question.

2
Guidelines for HTML/CSS/JS optimization process
2
CSS and HTML inconsistent when declaring multiple classes
2
Percent or Pixels HTML/CSS
28
Should I write HTML or CSS first?
3
Where did the html/css 'float' concept come from?