Researching distributed source control management (specifically mercurial). My question is more or less what is the best practice for rejecting entire sets of code that fail testing?

A team is working on a hello world program. They have testers and a scheduled release coming up with specific features planned.

So, the developers make their clones for their features, do the work and merge them into a QA repo for the testers to scrutinize.

Let's say the testers report back that "Feature B is incomplete and in fact dangerous", and they would like to retest A and C. 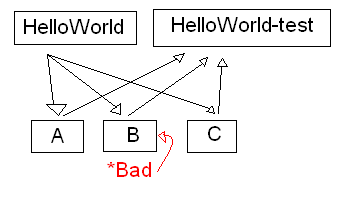 What's the best way to do all this so that feature B can easily be removed and you end up with a new repo that contains only feature A and C merged together?

Recreate the test repo? Back out B? Other magic?

The key here is to come up with a workflow that avoids the situation where "bad" code is ever exposed to developers or teams other than those who created it. If this were to occur, good code would be mixed with bad, and "unmerging" or detangling them will be difficult. So, prevent this from happening in the first place.

I'm assuming that HelloWorld in this example is the mainline repository, that contains known good code. Developers A, B, and C all clone from this repo and develop their changes against it. In the model I'm describing, HelloWorld-test is a transient repo solely used by QA to test merged changes before moving them into the mainline. Developers never look at HelloWorld-test. Here's how it works.

This is often called a "pull model" of development. I believe Linux kernel changes are managed this way.

In many cases it's not "QA" who does the pull/merge/build/test cycle, but instead it's done by a continuous integration system such as Hudson or Jenkins.

Of course, there are many variations of this, whether individual developers or teams have staging repos, whether changes are propagated via pushing or pulling, etc. But they should all share these key characteristics:

You can use patch queues to cherry-pick stuff coming in, or you could just use hg backout to remove the changes of just a changeset (see the hg book and look for "hg backout" here).

The difference is that patch queues will allow B from never appearing in the history.

OTOH, you might be better off by encouraging "feature branches" for both features and bug fixes, then select what branches to integrate to the baseline.

Your best bet is to have the coded tested before it's committed. Backing out B is your best bet, if you can't do that.

8
Mercurial branch or rebase?
3
How do I create a potential shippable product (PSP) at the end of a sprint?
0
Automating release management and CI on python projects under mercurial VCS
4
How to manage releases with multiple features at different states?
3
Release Management Tools with DVCS (Mercurial)
7
gitflow model with UAT releases is too chaotic, how to simplify?
12
How can we only include ready-to-be-released features in our production releases every other week?
0
Source Control Release Management: Simultaneous Releases with Different Configurations
3
Releasing untested features using git flow