The reason for doing it is to solve the case when a newer API is no longer backwards compatible with an older API.

To explain, just say that there is an old API v1.0. The maker of this API decides it is broken and works on a new API v1.1 that intentionally breaks compatibility with the old API v1.0. Now, any programs written against the old API cannot be recompiled as-is with the new API.

Then lets say there is a large app written against the old API and the developer doesn't have access to the source code. A solution would be to re-implement a "custom" old API v1.0 in terms of the new API v1.1 calls. So the "custom" v1.0 API is actually keeping the same interface/methods as the v1.0 API but inside its implementation it is actually making calls to the new API v1.1 methods.

So the large app can be then compiled and linked against the "custom" v1.0 API and the new v1.1 API without any major source code changes.

Is there a term for this practice?

So your application structure would look something like this:

Thanks to Anna Lear and Yannis Rizos for their answer, i.e. that the API 1.0 has effectively become an adaptor for API 1.1.

I just wanted to put forward a more specific answer. In my case the API 1.0 has retained the same public interface, so the application doesn't need to change. The only thing that has changed is the internal implementation of the API 1.0 itself - it now has a dependency on the new API 1.1. So instead of "porting the application" to use API 1.1, we're "porting the API". 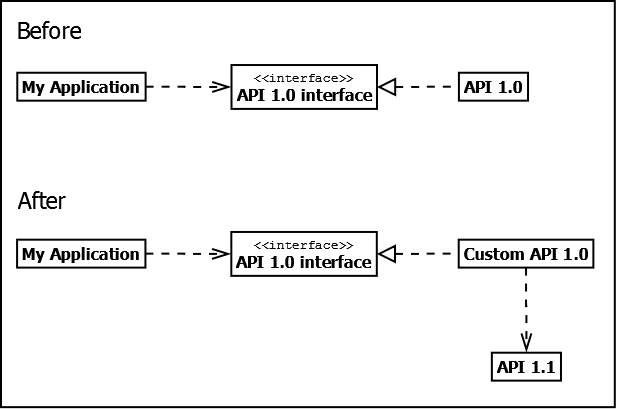 Not the answer you're looking for? Browse other questions tagged terminology api-design backward-compatibility or ask your own question.

13
What's the difference between the terms “protocol” and “standard”?
2
Creating public API definition for existing application
3
What's the term describing this system for generating user interfaces?
9
Versioning APIs
12
What's the meaning of term context in programming
334
Should you write your back-end as an API?
2
Trouble conceptualising API's
4
Should we tailor APIs to the customer, or ask the customer to use the existing one?
5
Implementing Heartbeat using REST API