I'm basing my Git repo on A successful Git branching model and was wondering what happens if you have this situation: 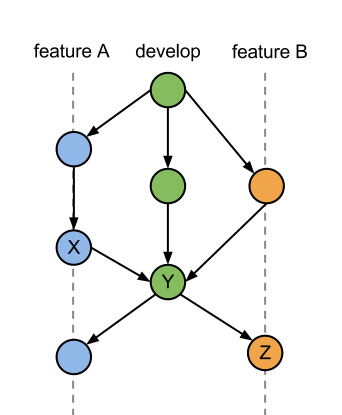 Say I'm developing on two feature branches A and B, and B requires code from A. The X node introduces an error in feature A which affects branch B, but this is not detected at node Y where feature A and B were merged and testing was conducted before branching out again and working on the next iteration.

Should a bugfix branch be created from the latest feature A node (the one branching from node Y) and then merged with feature A? After which both features are merged into develop again and tested before branching out?

The problem with this is that it requires both branches to merge to fix the issue. Since feature B doesn't touch code in feature A, is there a way to change the history at node Y by implementing the fix and still allowing the feature B branch to remain unmerged yet have the fixed code from feature A?

Use a distinct commit to fix the bug in one branch, then cherry-pick that commit into the other branch.

Arguably, there is no bug in A or X. Fix the bug in branch B where it was found. The fix will propagate to X and A in the normal course of events.

Although not a popular workflow in git, a workflow which is popular in Mercurial would be to update to revision X, fix the bug there (as X2) and then redo merge Y (which would have been a pair of merges in Mercurial).

In fact, this workflow is easier in git since after everyone has switched from Y to Y2 then the refs to the original Y will be lost and it will eventually be garbage collected. In hg you would have had to manually strip those commits to tidy up your repository.

Not the answer you're looking for? Browse other questions tagged git bug branching or ask your own question.