if you were asked to answer to the question “ what is the difference between the English language and a programming language” how you will respond? [closed]

Basically in both cases you have:

I don't think that will be fair to say "A programming language is only useful for a PC" or something like that.

I just can't find a real answer, but we can feel the difference, it's strange.

The essential distinction, I would say, is formally-defined syntax and semantics.

A human language, on the other hand, is not understood formally but intuitively. You can mutilate the grammar to a pretty high degree and the person you're talking to will still understand what you mean, and what you mean (and are understood to mean) is frequently not precisely what you said.

As a side note, this tends to make natural language extremely difficult to parse. It remains one of the great unsolved problems of artificial intelligence, despite being one of the ones they've been working on the longest!

Mason has already said this, but: Formal languages have formally defined semantics. Human languages don't. It's not still really well understood how humans extract semantics despite the fact that this has been studied for decades by linguists, philosophers and psychologists.

When I was a prof 30 years ago there would be these Faculty Colloquia or off-site weekends where some profs from around the university would get invited, with deans, for fancy food and "collegial" discussions. Read: b o r i n g.

Once the question was raised: Should a computer language be allowed as a substitute for the foreign language requirement?

This drove me nuts. To think that learning BASIC or PASCAL (at the time) was even on the chart, compared to learning French, German, or another human language and culture, seemed preposterous.

Technology is beautiful. It has a depth of meaning that can't really be imagined outside of it. At the same time, it is easy just to think of it as a means to an end - a way to engineer our mechanical slaves.

What is there in programming that can compare to a poem, or a novel? When you learn a human language, it is not just a vocabulary, syntax, etc. It is a window on history, culture, beauty, what makes life interesting.

Ask a strange question and you get a strange answer :) Here are some differences (INMO)! 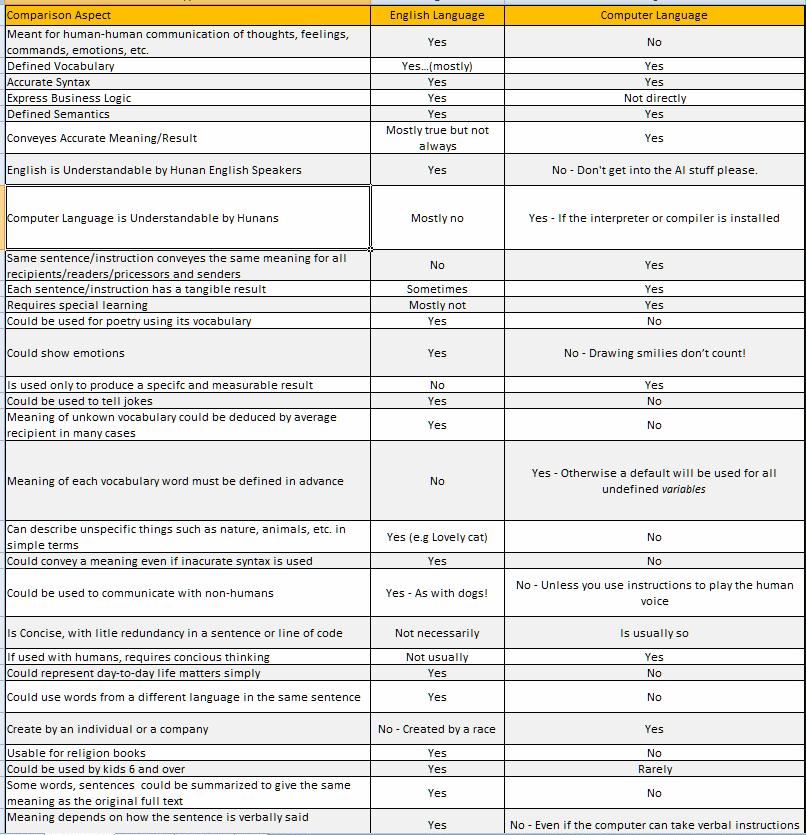 - Add to the list the fact that recursion is meaningful to computers only and not to humans.

"A programming language is only useful for a PC" isn't fair you're right.

Fair way to state the difference would be

A programming language is also useful for a PC

The point is, programming language (just like English) is primarily intended to be read / communicated by humans, but unlike English, it has a cumbersome limitation that it has to allow for machine execution.

...Writing code certainly feels very similar to writing poetry. When I'm writing poetry, it feels like the center of my thinking is in a particular place, and when I'm writing code the center of my thinking feels in the same kind of place. It's the same kind of concentration. So, I'm thinking up possibilities, I'm thinking about, well, so how do I reinvent the code, gee, you know, what's the simplest way to do this.

I'm thinking about things like simplicity -- how easy is it going to be for someone to look at it later? How well is it fulfilling the overall design that I have in mind? How well does it fit into the architecture? If I were writing a very long poem with many parts, I would be thinking, "Okay, how does this piece fit in with the other pieces? How is it part of the bigger picture?" When coding, I'm doing similar things, and if you look at the source code of extremely talented programmers, there's beauty in it. There's a lot of attention to compression, using the underlying programming language in a way that's easy to penetrate. Yes, writing code and writing poetry are similar...

...Instead of imagining that our main task is to instruct a computer what to do, let us concentrate rather on explaining to human beings what we want a computer to do.

The practitioner of literate programming can be regarded as an essayist, whose main concern is with exposition and excellence of style. Such an author, with thesaurus in hand, chooses the names of variables carefully and explains what each variable means. He or she strives for a program that is comprehensible because its concepts have been introduced in an order that is best for human understanding...

When you're speaking English you're having 1 big negotiation over non-data which ends in ambiguous instructions and hidden meanings to data supposedly being clear.

Purpose of any language is communication, to make your feelings known to other side be it a person or a machine. The basic difference between English language and programming language is the way of communicating the feelings. In programming language you do it in a way you do it with a child, giving parsed information while English is much more complicated than that. You need to make your thoughts understood as per the listener, but here you have a same set of instructions for the system. This is the basic point. Coming now to structure and composition- We use English in our programming languages but is not the other way around. Also neither the structure nor the composition is necessary in English but if you miss this in programs it computer will make your life hell till you correct it according to the predefined set of rules. It is why the programmers are trying to merge English into the Programming language that Artificial Intelligence was born; so as to merge the gap between English and Programming Languages, to make layman understand the machine and machine understand the layman.

Not the answer you're looking for? Browse other questions tagged language-agnostic or ask your own question.

15
Should a programmer take writing lessons to enhance code expressiveness?

2
Library to fake intermittent failures according to tester-defined policy?
17
Which statically typed languages support intersection types for function return values?
2
How to explain the difference between a variable and a key in a key-value pair?
13
Dealing with not knowing parameter names of a function when you're calling it
9
What is the functional programming answer to type-based invariants?
0
Bound Variadic Arguments: Bitmask vs Array
0
What is the difference between running two blocks of code on the same thread and running them on two synchronous threads?