Why a static main method in Java and C#, rather than a constructor?

Ask Question
Asked 9 years, 6 months ago
Active 6 years, 9 months ago
Viewed 8k times
58
Want to improve this post? Provide detailed answers to this question, including citations and an explanation of why your answer is correct. Answers without enough detail may be edited or deleted.

I’m Looking for a definitive answer from a primary or secondary source for why (notably) Java and C# decided to have a static method as their entry point, rather than representing an application instance by an instance of an Application class (with the entry point being an appropriate constructor).

Background and details of my prior research

This has been asked before. Unfortunately, the existing answers are merely begging the question. In particular, the following answers don’t satisfy me, as I deem them incorrect:

Just to justify further why I think this is a valid and interesting question:

To be clear, there isn’t a specific disadvantage to having a static main method, it’s just distinctly odd, which made me wonder if there was some technical rationale behind it.

I’m interested in a definitive answer from a primary or secondary source, not mere speculations.

1 Although there is a callback (Startup) which may intercept this.

In Java, the reason of public static void main(String[] args) is that 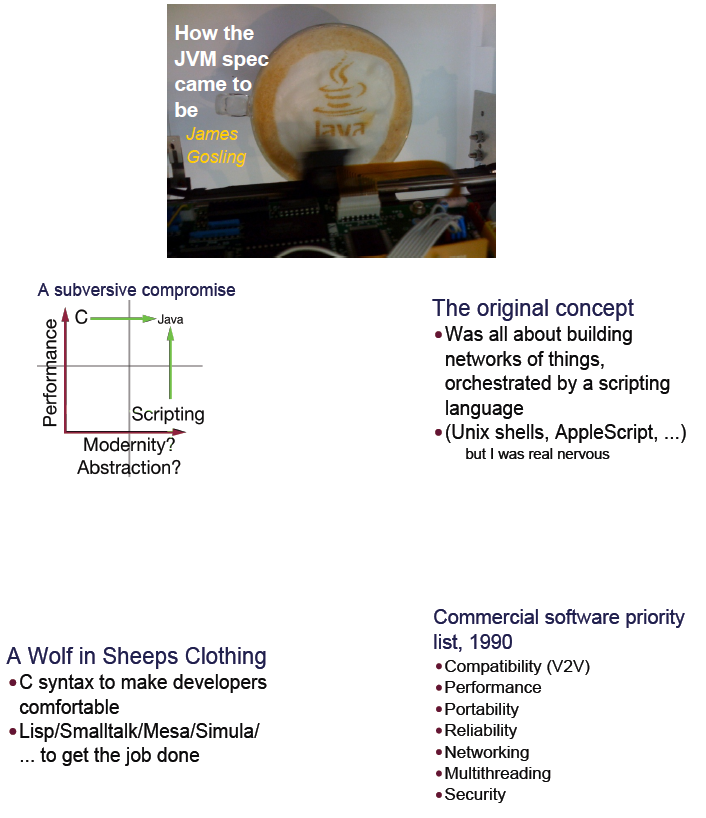 For C#, the reasoning is transitively similar so to speak. Language designers kept the program entry point syntax familiar for programmers coming from Java. As C# architect Anders Hejlsberg puts it,

...our approach with C# has simply been to offer an alternative... to Java programmers...

expanding above and backed up with boring references.

...The manner in which the initial class is specified to the Java virtual machine is beyond the scope of this specification, but it is typical, in host environments that use command lines, for the fully qualified name of the class to be specified as a command-line argument and for subsequent command-line arguments to be used as strings to be provided as the argument to the method main. For example, using Sun's Java 2 SDK for Solaris, the command line

will start a Java virtual machine by invoking the method main of class Terminator (a class in an unnamed package) and passing it an array containing the four strings "Hasta", "la", "vista", and "Baby!"...

...see also: Appendix: I need your clothes, your boots and your motorcycle

...that helps avoid a couple of false traces in our investigation.

The Java virtual machine knows nothing of the Java programming language...

I noticed above when studying prior chapter - 1.1 History which I thought could be helpful (but turned out useless).

Gosling: a compromise between C and scripting language...

Based on above, I began searching the web for JVM history. Didn't help, too much garbage in results.

Then, I recalled legends about Gosling and narrowed down my search to Gosling JVM history.

Eureka! How The JVM Spec Came To Be

In this keynote from the JVM Languages Summit 2008, James Gosling discusses... Java's creation,... a compromise between C and scripting language...

Note while typing this - connecting C, scripting and VM Spec 1.2 with its nothing-of-Java - I feel like something familiar, something... object oriented is slowly passing away. Take my hand and keep movin' Don't slow down we're nearly there now

...The main function actually has two arguments, int argc and char *argv[], respectively, which can be used to handle command line arguments...

Are we getting closer? you bet. It is also worth following "main" link from above quote:

the main function is where a program starts execution. It is responsible for the high-level organization of the program's functionality, and typically has access to the command arguments given to the program when it was executed.

Based on above I would say that static, main and String[] args were at the moments of Java and C# creation most reasonable choices to define program entry point.

Appendix: I need your clothes, your boots and your motorcycle

will start a Java virtual machine by invoking the method main of class Terminator (a class in an unnamed package) and passing it an array containing the four strings "Hasta", "la", "vista", and "Baby!".

We now outline the steps the virtual machine may take to execute Terminator, as an example of the loading, linking, and initialization processes that are described further in later sections.

The initial attempt... discovers that the class Terminator is not loaded...

After Terminator is loaded, it must be initialized before main can be invoked, and a type (class or interface) must always be linked before it is initialized. Linking (§2.17.3) involves verification, preparation, and (optionally) resolution...

Verification (§2.17.3) checks that the loaded representation of Terminator is well formed...

Resolution (§2.17.3) is the process of checking symbolic references from class Terminator...

That just feels vaguely abusive to me. A constructor is used for the initialization of an object: it sets up an object, which is then used by the code that created it.

If you put basic usage functionality inside of the constructor, and then never actually use the object that the constructor creates in external code, then you're violating the principles of OOP. Basically, doing something really weird for no apparent reason.

Why would you want to do that anyway?

For Java I'd think the reasoning is simple: When developing Java, the devs knew that most people learning the language would know C/C++ beforehand.

Hence Java not only looks a lot like C/C++ instead of say smalltalk, but also took over idiosynchrasies from C/C++ (just think of octal integer literals). Since c/c++ both use a main method, doing the same for java made sense from that point of view.

I'm pretty sure I remember bloch or someone saying something along this lines about why they added octal integer literals, I'll see if I can find some sources :)

Well, there're lots of main functions out there which just run an infinite loop. A constructor working this way (with an object that never gets constructed) is what seems odd to me.

There're so many funny things about this concept. Your logic running on top of a unborn object, objects that born to die (since they do all their job in the constructor), ...

Wouldn't all these side effects gonna corrupt much more the OO wagon than a simple public (because it needs to be accessed by an unknown) static (because no instance is needed for us to get started) void main (because it's the entry point)?

For a simple, plain, function entry point to exist in Java, public and static would automatically be required. Although being a static method, it boils down to what we can get more near of a plain function to accomplish what's wanted: a simple entry point.

If you are not going to adopt a simple, plain, function entry point as an entry point. What's next that doesn't seems odd as a contructor that's not meant to construct?

You can quickly run some standalone tests on a class, during development, by sticking a main() in the class you're trying to test.

You've got to start somewhere. A static main is the simplest execution environment you can have -- no instance of anything (outside of the JVM and the simple string parameters) needs to be created -- so it can "come up" with a minimum of fuss (and low likelihood of a coding error preventing startup, etc) and can do simple things without a lot of other setup.

Basically an application of KISS.

To my understanding the primary reason is simple. Sun was a Unix company selling Unix machines and Unix is what the C "main(args)" convention for invoking a binary was designed for.

Additionally Java was explicitly designed to be easy to pick up for C and C++ programmers, so there was no good reason for not just simply picking up the C convention.

The chosen approach where every class can have an invocation method is quite flexible, especially in combination with the Main-Classline in the MANIFEST.MF file in a runnable jar.

It is not consistent with OOP philosophy that a program would be an object from an OS process point of view, as there is no way to have more than one by definition.

On top of that, a constructor isn't an entry point by any means.

It seems to me like the most reasonable choice to have main as a static function, which it actually is at the end of the day. Given the architecture of VMs such as JVM and CLR, any other choice would be unnecessarily pushing it.

Not the answer you're looking for? Browse other questions tagged java c# history entry-point or ask your own question.

0
Starting Execution of Java Program
24
Naming conventions for Java classes that have a static main method?
8
Reason for (post/pre) increment operator in Java or C#
8
Reasoning behind the syntax of octal notation in Java?
2
Why does Java support brackets behind variables and even behind method signatures?

24
Naming conventions for Java classes that have a static main method?
2
Should cucumber step definitions in Java be static methods or instance methods?
110
Why were default and static methods added to interfaces in Java 8 when we already had abstract classes?
68
Is there a performance benefit to using the method reference syntax instead of lambda syntax in Java 8?
31
Why is Math.Sqrt() a static function?
0
How to handle the getting of information from Model