I have to create an UML class diagram from the following example code (Perl). I don't think that the standard factory pattern match in my case or I don't understand it correctly. I don't have AbstractFactory and ConcreteFactory but a single Factory.

What does this example looks like in UML class diagram?

Edit: This is only a very flat and simple example. The real application has many "Types" with totally different workflows. The class diagramm is to get an overview over the hole structure. Not realy for internal workflow like sequence diagrams does.

You can draw an UML sequence diagram out of this easily, but a class diagramm won't tell you much, except for some logical errors. 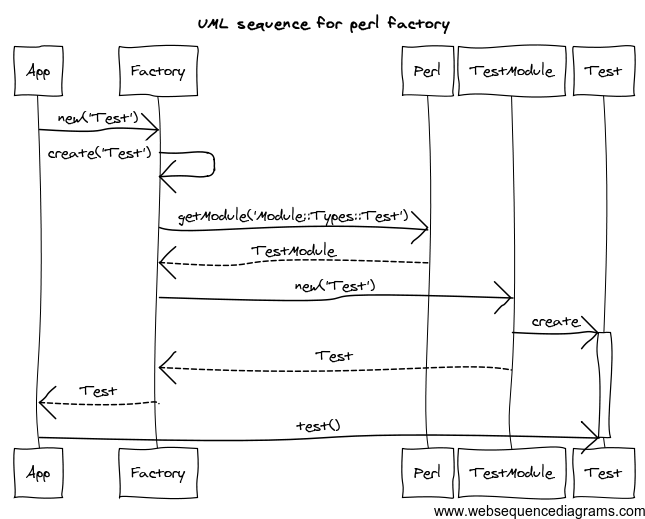 Now, let's remove Factory for a moment, what do we have? 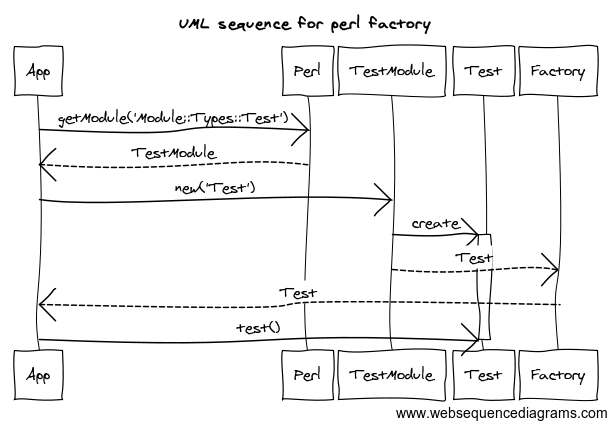 Hmm, are we sure we're missing something?

Basically all your Factory module does is, it shortens a namespace into its last part.

Also, what kind of interface is App dependent of?

Factory is dependent of

Usually, an Abstract Factory is called an Abstract Factory, because it sits on top of an object 'family', all sharing the same interface. It can be, that a Factory pattern is used to decide between two related "families", all providing the same interface, but, for example, one being a Swing UI component library, the other being an AWT UI component library (or Motif and GTK), or a "real" implementation and a mock-up implementation for testing.

So, with this one class, it's not obvious what are you using the factory for. Are you trying to switch namespaces to a mock-up version for testing?

You can draw your class system based on this (you see who is dependent on who and who is associated to who - dependent if knows about it, associated if has to know about it beforehand in order to be able to call) but I doubt it's the final solution.

Not the answer you're looking for? Browse other questions tagged design-patterns uml perl class-diagram or ask your own question.

28
UML Diagrams of Multi-Threaded Applications
0
How to construct UML activity diagram reflecting real programmed source code as docs
2
UML diagram for an existing implementation
3
When is it worth NOT using a Factory?
3
Am I using the factory method design pattern correctly, or which creational pattern should I use?
2
How can we make a UML diagram (or something similar) for a project which doesn't contains classes (like non object oriented)?
0
Should I refactor this class to use a Factory?
1
Is a python `abstract property` that returns an abstract class an example of the Factory Pattern?