What are the practical ways to implement the SRP?

Simply what are the practical techniques people use to check if a class violates the single responsibility principle?

I know that a class should have only one reason to change, but that sentence is somewhat lacking a practical way to really implement that.

However, sometimes it's hard to figure out if a responsibility really violates the SRP.

Are there more ways to check for the SRP?

The question is not about what the SRP means, but rather a practical methodology or a series of steps to check and implement the SRP. 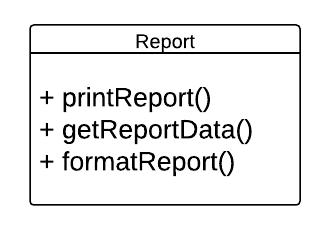 I have added a sample class that clearly violates the SRP. It would be great if people could use it as an example to explain how they approach the single responsibility principle.

The example is from here.

The SRP states, in no uncertain terms, that a class should only ever have one reason to change.

Deconstructing the "report" class in the question, it has three methods:

Ignoring the redundant Report being used in every method, it is easy to see why this violates the SRP:

So this one class is possibly coupled with a database, a screen/printer device, and some internal formatting logic for logs or file output or whatnot. By having all three functions in one class, you're multiplying the number of dependencies and tripling the probability that any dependency or requirement change will break this class (or something else that depends on it).

Part of the problem here is that you've picked a particularly thorny example. You should probably not have a class called Report, even if it only does one thing, because... what report? Aren't all "reports" completely different beasts, based on different data and different requirements? And isn't a report something that's already been formatted, either for screen or for print?

But, looking past that, and making up a hypothetical concrete name - let's call it IncomeStatement (one very common report) - a proper "SRPed" architecture would have three types:

This is made significantly easier in modern languages with the introduction of generics and IoC containers. Most of your application code does not need to rely on the specific IncomeStatementPrinter class, it can use IPrintable<T> and thus operate on any kind of printable report, which gives you all of the perceived benefits of a Report base class with a print method and none of the usual SRP violations. The actual implementation need only be declared once, in the IoC container registration.

Some people, when confronted with the above design, respond with something like: "but this looks like procedural code, and the whole point of OOP was to get us -away- from the separation of data and behavior!" To which I say: wrong.

The IncomeStatement is not just "data", and the aforementioned mistake is what causes a lot of OOP folks to feel they are doing something wrong by creating such a "transparent" class and subsequently start jamming all kinds of unrelated functionality into the IncomeStatement (well, that and general laziness). This class may start out as just data but, over time, guaranteed, it will end up as more of a model.

For example, a real income statement has total revenues, total expenses, and net income lines. A properly-designed financial system will most likely not store these because they are not transactional data - in fact, they change based on the addition of new transactional data. However, the calculation of these lines is always going to be exactly the same, no matter whether you are printing, rendering, or exporting the report. So your IncomeStatement class is going to have a fair amount of behaviour to it in the form of getTotalRevenues(), getTotalExpenses(), and getNetIncome() methods, and probably several others. It is a genuine OOP-style object with its own behaviour, even if it doesn't really seem to "do" much.

But the format and print methods, they have nothing to do with the information itself. In fact, it's not too unlikely that you'll want to have several implementations of these methods, e.g. a detailed statement for management and a not-so-detailed statement for the shareholders. Separating these independent functions out into different classes gives you the ability to choose different implementations at runtime without the burden of a one-size-fits all print(bool includeDetails, bool includeSubtotals, bool includeTotals, int columnWidth, CompanyLetterhead letterhead, ...) method. Yuck!

Hopefully you can see where the above, massively-parameterized method goes wrong, and where the separate implementations go right; in the single-object case, every time you add a new wrinkle to the printing logic, you have to change your domain model (Tim in finance wants page numbers, but only on the internal report, can you add that?) as opposed to just adding a configuration property to one or two satellite classes instead.

Implementing the SRP properly is about managing dependencies. In a nutshell, if a class already does something useful, and you are considering adding another method that would introduce a new dependency (such as a UI, a printer, a network, a file, whatever), don't. Think about how you could add this functionality in a new class instead, and how you could make this new class fit into your overall architecture (it's pretty easy when you design around dependency injection). That is the general principle/process.

Side note: Like Robert, I patently reject the notion that an SRP-compliant class should have only one or two state variables. Such a thin wrapper could rarely be expected to do anything truly useful. So don't go overboard with this.

The way I check for the SRP is to check every method (responsibility) of a class and ask the following question:

"Will I ever need to change the way I implement this function?"

If I find a function that I'll need to implement in different ways (depending on some kind of configuration or condition) then I know for sure that I need an extra class to handle this responsibility.

One possible implementation (in Java). I took liberties with the return types but over all I think it answers the question. TBH I don't think the interface to the Report class is that bad, though a better name might be in order. I left out guard statements and assertions for brevity.

EDIT: Also notice that the class is immutable. So once it is created you can't change anything. You could add a setFormatter() and a setPrinter() and not get into too much trouble. The key, IMHO, is to not change the raw data after instantiation.

Here's a quote from rule 8 of Object Calisthenics:

Most classes should simply be responsible for handling a single state variable, but there are a few that will require two. Adding a new instance variable to a class immediately decreases the cohesion of that class. In general, while programming under these rules, you’ll find that there are two kinds of classes, those that maintain the state of a single instance variable, and those that coordinate two separate variables. In general, don’t mix the two kinds of responsibilities

In your example, it is not clear SRP is being violated. Maybe the report should be able to format and print itself, if they are relatively simple:

The methods are so simple it doesn't make sense to have ReportFormatter or ReportPrinter classes. The only glaring problem in the interface is getReportData because it violates ask don't tell on non-value object.

On the other hand, if the methods are very complicated or there are many ways to format or print a Report then it makes sense to delegate the responsibility (also more testable):

SRP is a design principle not a philosophical concept and so it is based on the actual code you are working with. Semantically you can divide or group a class into as many responsibilities as you wish. However, as a practical principle, SRP should help you find the code you need to modify. Signs you are violating SRP are:

You can fix these through refactoring by improving names, grouping similar code together, eliminating duplication, using a layered design, and splitting/combining classes as needed. The best way to learn SRP is to dive into a codebase and refactor away the pain.

Single Responsibility Principle is highly coupled with the notion of cohesion. In order to have a highly cohesive class you need to have co-dependence between the class' instance variables and its methods; that is, each of the methods should manipulate as many instance variables as possible. The more variables a methods uses, the more cohesive is to its class; maximum cohesion is usually unachievable.

Also, in order to apply SRP well you understand well the business logic domain; to know what each abstraction should do. Layered architecture is related to SRP also, by having each layer do a specific thing (Data Source Layer should provide data and so on).

Coming back to cohesion even if your methods do not use all the variables, they should be coupled:

Not the answer you're looking for? Browse other questions tagged design design-patterns object-oriented refactoring single-responsibility or ask your own question.