I'm getting ready for my first "bigger" .NET project (ASP.NET MVC 3/4) on which I'm going to lead another 2 programmers and right now I'm choosing the right version control system for the job (plus I'm gonna use it for my future development too).

My problem is that I did't use any version control system before, so I would like it to have as fast learning curve and intuitive merging as possible.

So far I quickly looked at VisualSVN (I like the Visual Studio integration in it), but I'm reading everywhere how Git is awesome and dunno which one to choose (not limited to these two).. Maybe I'm ovethinking this but I like when everything goes smoothly:)

I won't list the differences between the many source control systems out there. There are literally hundreds of articles online doing just that.

What I will do is give you my experience working with both Git and Mercurial on .NET projects.

Both version control systems are pretty much the same, ultimately I'd go with Mercurial because it has:

You can also find a great table comparing the Big Kahunas of source control on Veracity's official website: 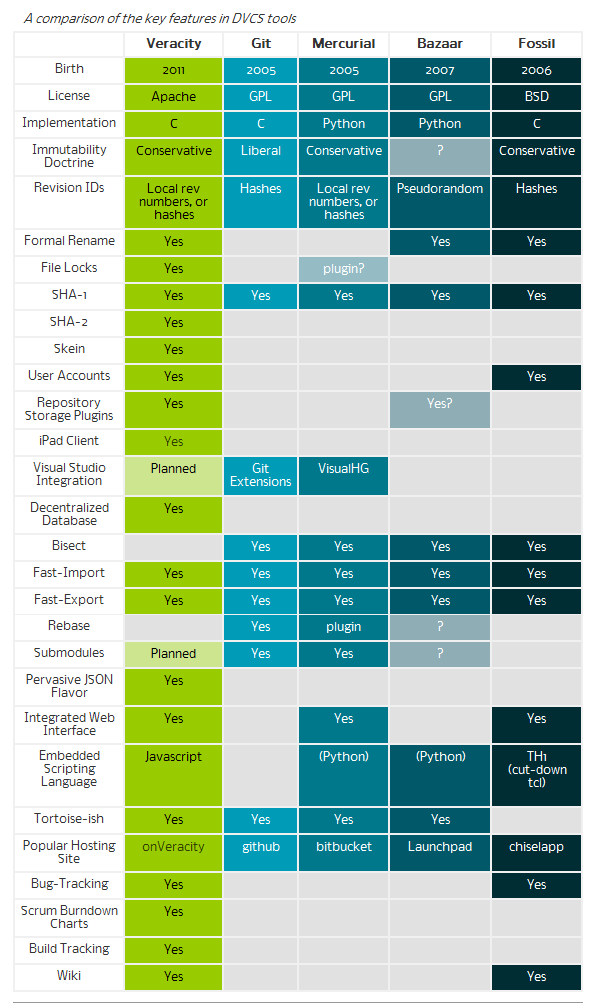 If all you need is a version control system, I would go with git.

If you need a complete ALM solution, go with TFS.

Git has a higher learning curve than SVN, but gives you way more features and is way faster (even small svn repositories can get excruciatingly slow for some features e.g. showing a graph log)

Mercurial is also a viable alternative, its simpler than git, but pretty much as powerful and fast. It also arguably fits better into a windows environment, though git nowadays is much better in this respect

While SVN is simpler I'd also say it takes a bit more discipline to use, i.e. it is simpler because it makes the user do some of the work for it (e.g. merges require more information from user usually, and tags rely on you not committing to as they are really the same as branches)

overall I'd pick Mercurial or Git, with a slight preference for mercurial if you already know python (mercurial can be extended with python hooks) or want a simpler interface. I wouldn't pick svn for myself, and would only really consider it if you already have a large number of developers who are familiar with it.

Expanding on Doc Browns comment; I'd agree VS integration is not really necessary if you are happy with either command line or an explorer shell extension (tortoiseX) however all the major players have VS plugins (personally I tend to avoid these as I find doing everything through tortoise is good enough and I don't like having to many plugins installed as VS can get a bit unstable)

I've been using SourceGear Vault for years and we are very happy with it. Setup and configuration is extremely simple and it just works. Integration with Visual Studio is perfect. Support is very good too.

If you are after the less complicated alternative, SourceGear Vault is definitely much simpler to set up and use than the average DVCS.

Not the answer you're looking for? Browse other questions tagged .net version-control or ask your own question.

305
I'm a Subversion geek, why should I consider or not consider Mercurial or Git or any other DVCS?
4
Need help with directory structure in porting codebase to SVN
6
What's the best way to handle multiple simultaneous "streams" of development in version control?
3
How to handle duplicate files in version control
5
Version control workflow for semi-bespoke software
1
Can version control systems use the filesystem log to capture changes?
7
Should Visual Studio specific files be excluded from version control?