Performing client-side OAuth authorized Twitter API calls versus server side, how much of a difference is there in terms of performance?

I'm working on a Twitter application in Ruby on Rails. One of the biggest arguments that I have with other people on the project is the method of calling the Twitter API. Before, everything was done on the server: OAuth login, updating the user's Twitter data, and retrieving tweets.

Retrieving tweets was the heaviest thing to do since we don't store the tweets in our database, so viewing the tweets means that we have to call the API every time. One of the people in the project suggested that we call the tweets through Javascript instead to lessen the load on the server. We used GET search, which, correct me if I'm wrong, will be removed when v1.0 becomes completely deprecated, but that really isn't a concern now.

When the Twitter API has migrated completely to v1.1 (again, correct me if I'm wrong), every calls to the API must be authenticated, so we have to authenticate our Javascript requests to the API. As said here:

We don't support or recommend performing OAuth directly through Javascript -- it's insecure and puts your application at risk. The only acceptable way to perform it is if you kept all keys and secrets server-side, computed the OAuth signatures and parameters server side, then issued the request client-side from the server-generated OAuth values.

If we do exactly what Twitter suggests, the only difference between this and doing everything server-side is that our server won't have to contact the Twitter API anymore every time the user wants to view tweets. Here's how I would picture what's happening every time the user makes a request: 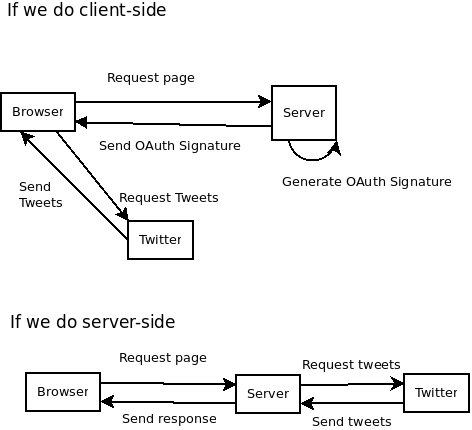 If we do it through Javascript, it would be harder on my part because I would have to create the signatures manually for every request, but I will gladly do it if the boost in performance is worth all the trouble. Doing it through Ruby on Rails would be very easy since the Twitter gem does most of the grunt work already, so I'm really encouraging the other people in the project to agree with me.

Is the difference in performance trivial or is it significant enough to switch to Javascript?

Your performance gain are going to come from Scaling up, (if you need to). Imaging you have a whole lot of users Option 2 would cause server side bottle neck much sooner than option 1.

Small scale where the server would have no problem with the load, the performance gains would be negligible.

Not the answer you're looking for? Browse other questions tagged javascript performance ruby-on-rails twitter oauth or ask your own question.

24
We have a large Ruby on Rails application (25 million monthly users), our management decided to rewrite in Node.js, am I crazy?
2
Sharing business logic between server-side and client-side of web application?
0
Is api user authentication with oauth possible for both email/pw and 3rd party services
1
How to scrub Twitter and Facebook posts for many users
26
OAuth2 ROPC vs Basic Auth for public REST APIs?
128
REST API security Stored token vs JWT vs OAuth
1
Decoupling REST API and frontend web application
1
Can I have a client-side-only web application keep OAuth tokens?
5
Benefits of using a JS Framework