What are MPEG I, P and B frames?

I was recently going over MPEG articles and videos to understand how it works. I understand what I, P and B frames do but I do not understand how the prediction is calculated.
Assume that I want to record a video of a ball falling from the sky to the ground and then bouncing a couple of times before finally coming to a halt.
Also, I am not clear with the concept of the 16x16 macroblock. Please tell me:

Short answer:
Blocks are units for inter-frame comparison;
Prediction is based on amount of blocks presenting on both previous and following images;

Longer answer:
As input, a video encoder receives nothing else but a sequence of frames.
In most cases, the adjacent frames are very similar to each other, and the encoder attempts to figure out whether these frames are indeed similar.

How do you say if two images are similar?

In order to understand how prediction works, take a look at this image. It is created by a deshaker plug-in for VirtualDub, and used for a different purpose (detecting camera shakes), but it seems very representative: 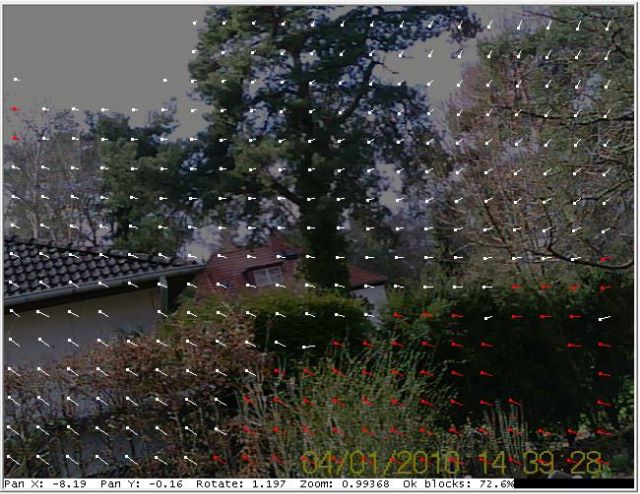 The arrows indicate how the current image differs to the previous one;
The entire frame is split into macroblocks (larger than 16x16, however);
The difference for each block, compared to the previous image, is a movement vector;
As you see, most macroblocks (white arrows) follow the common pattern, and therefore they can be encoded by only applying a transposition matrix to a previous frame.
However, there are some blocks (red arrows) do not comply with the common pattern, and therefore they must be encoded as-is.
Of course, if everything is red, there's no choice other than encoding the entire frame as-is.

Not the answer you're looking for? Browse other questions tagged video or ask your own question.

2
Taking an audio file, automatically transcribing it, taking the output, and matching it to a transcript
1
Difference between overhead of B frame and P frame
2
What algorithm is used in subtitles?