How to justify rewriting/revamping legacy software in a business case? [duplicate]

I work for a great little software company which makes good revenue from our main software package. The problem for me is that it's almost unmaintainable. It's written in Delphi 7 (has upgraded versions over time) and has been worked on by a lot of developers over the past 20 or so years.

There's a few things I would love to include, namely for me, the length of time taken to debug/write a feature in "legacy" code, versus coherent, well structured OO code. Does anyone know of any blog posts or the like where this is talked about? For us in the company this is a huge reason. Despite being decent developers we feel like writing a new feature is just piling more rubbish on top. On top of that, even for me who has a decent level of understanding of the code, changing things is infuriating - a small change can have a ridiculous domino effect.

Your software is maintainable. That is why you are working on it. In fact, the revenue they get from selling and supporting that software probably supports your loaded salary. If I was managing something that works, I would leave it alone. If you had a house with a convoluted plumbing architecture, would you pay a plumber to clean up the architecture even though it works perfectly well right now? Probably not.

I would bet that software product is in "milk-the-cow" mode. They are just trying to get as much profit out of it as possible from existing customers before it dies. If that is not true, then what are the architectural scenarios coming down the pipe? More of the same data? New data? Platform or tool deprecation? High performance algorithms? Expanding customer base? New features? New platforms? Mobile? If there are no new business conditions which will drive you to change the architecture, then the architecture will not change? If your architectural is at the critical point where the next change will cause an incredibly expensive fix, then you'll have to wait for that to happen before they are willing to pay for a change.

The upside of this gig is that they probably can't fire you, because Delphi skills are relatively hard to find. And there is job security when you are supporting a profitable product.

Read Joel on Software - Things You Should Never Do, Part I, or hope you managers don't. Mine obviously had not read it, I bet now, if they have, they wish they had earlier.....

I work on a project rewritten in Java from over a million lines of legacy ADA codebase. We now have less than a million lines of new "Java syntax" legacy Ada program, with a whole raft of defects that did not exist before, and a number of new features that sort of work most of the time. Fortunately we also have a Unit testing framework so when a defect get found we can write yet another unit test that fails, fix the defect, watch that unit pass and a dozen others fail......

Essentially only a fool would chuck out working code for the empty promises of a new code base.

One of my experiences that went well

The system was dead and unable to react to market changes, it was customer facing, looked and worked in an outdated way and had so many bug reports, that the estimated time to fixing them was more than rewriting the entire thing. Some lessons

Not so good experience

System was very buggy and had a horrible data model and data access layer. It was actually the technology used that was crippling it. There were discussions on using the current data model but they were abandoned. The new design was necessary to make new features possible.

I've had a few systems handed to me that some would justify to be rewritten (some people are very over eager, and sometimes they simply want to do it because the code looks different).

The particular system was a mess. The layers were all mixed up with no distinguishable data access layer, controls on screens were named Button1, Button2... Variables were re-used, pieces of code were copied wholesale across different classes.

Using refactoring tools helped a lot, but essentially it took about 2 months of dedicated work, interspersed with bug fixes and enhancement requests. Essentially the project could keep running despite the massive internal overhaul. If you start small and fix the little things soon you realise that you can be comfortable working with something.

Always try to think of every single reason not to rewrite. Think as hard as you can how you can save a dying system. You would be surprised how much less work it is than you think. Rewrites are a massive gamble, and in good company it will work well. Management usually tries to justify a rewrite by adding features to the new version. This could open up a nightmare of constant scope creep, what-if-we-had-stupid-feature-x, analysis paralysis and all the other bad things that come with a new project.

If your company is good at new projects and there is no way to save it then report on what is bad in the system. Show it to the your managers, get a third opinion from another developer, and take it from there.

As always when it comes to business minded people, present your case as a profit/loss analysis. Your analysis should answer these three questions:

This graphic could help, it's a function of code base quality and business value of the application: 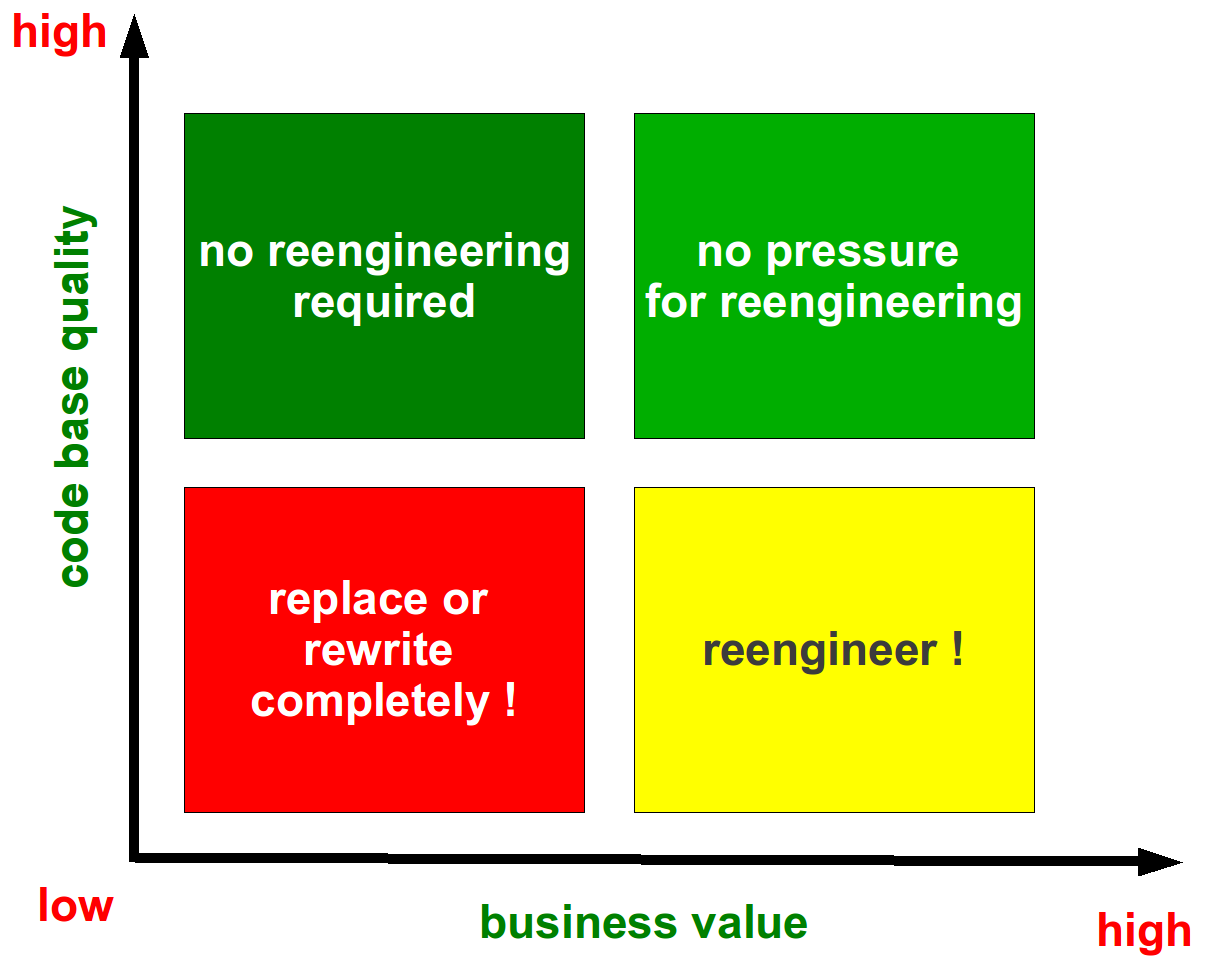 Does anyone know of any blog posts or the like where this is talked about?

Yes, here are two articles that you should review and forward to your management:

And here are two points about legacy software to be mindful of:

Legacy software that is difficult to modify will:

Delphi supports nearly every modern programming concept that Java and C# support. This means you could easily solve your cyclical dependencies and global variable problem. You could even solve your object orientation if you wanted. All you would need to do is address a single problem at a time.

Not the answer you're looking for? Browse other questions tagged code-quality business software or ask your own question.

173
How can I convince management to deal with technical debt?