Verfication vs validation again, does testing belong to verification? If so, which?

I have asked before and created a lot of controversy so I tried to collect some data and ask similar question again. E.g. V&V where all testing is only validation: http://www.buzzle.com/editorials/4-5-2005-68117.asp According to ISO 12207, testing is done in validation:

In verification, it mentiones.

The code implements proper event sequence, consistent interfaces, correct data and control flow, completeness, appropriate allocation timing and sizing budgets, and error definition, isolation, and recovery. and The software components and units of each software item have been completely and correctly integrated into the software item

Not sure how to verify without testing but it is not there as a technique.

Verification: The process of evaluating software to determine whether the products of a given development phase satisfy the conditions imposed at the start of that phase. [IEEE-STD-610].
Validation: The process of evaluating software during or at the end of the development process to determine whether it satisfies specified requirements. [IEEE-STD-610]

At the end of development phase? That would mean UAT..

So the question is, what testing (unit, integration, system, uat) will be considered verification or validation? I do not understand why some say dynamic verification is testing, while others that only validation.

An example: I am testing an application. System requirements say there are two fields with max. lenght of 64 characters and Save button. Use case say: User will fill in first and last name and save. When checking the fields and Save button presence, I would say its verification. When I follow the use case, its validation. So its both together, done on the system as a whole.

The product on which I spend the bulk of my time used to distinguish verification from validation. Problems with this distinction popped up on an annoyingly frequent basis. The distinction was clear to me, but my interpretation wasn't universally agreed upon. Is this a validation test or a verification test? Who cares? Why are we having this stupid fight? A rose by any other name smells just as sweet. The ultimate goal is to answer the question "Is it right?"

Our resolution to this ongoing imbroglio was to get rid of that distinction between verification and validation. We think of verification & validation as one word which together answer the question "Is it right?" We don't split V&V into arbitrary parts. What we split into parts is how we go about answering that singular question. Whether you're looking at our top level document or a detailed model document such as how we model gravity, chapter 5 is titled "Inspections, Tests, and Metrics". The old title, "Verification and Validation": It's gone. We don't split verification from validation. We instead split things into inspections, tests, and metrics. The chapter has typically has four sections, inspections, tests, traceability (typically automated), and metrics (also typically automated). Aside: Traceability analysis is just a specialized (but very important) kind of inspection. It's elevated as a separate section because of it's importance. We wrangled a tiny bit as to whether to call the chapter "Inspections, Tests, Traceability, and Metrics". The answer was no. No more religious wars over names. Traceability is a kind of inspection; the title still fits.

Things that answer the question "is it right" without actually using the product goes under the heading of "inspections". Requirements analysis, traceability analyses, analyses that demonstrate that the simplifying assumptions made by the model are acceptable for the model's intended use: They're all inspections because we didn't use the product. Traceability, while an inspection, has a home of its own. Using the product to answer that question go under the rubric of "tests". Everything from unit tests to tests against some artificial setup with a known analytic solution to integrated tests where we're comparing the results from the product to real data collected from some previously flown vehicle: They're all tests. Along the way we collect lots of metrics, many of them automated. Different levels of documents have different kinds of boring but important numbers. SLOC count, complexity, code coverage, number of waivers granted, number of issues in the CM system. Those boring but important numbers go under the rubric of "metrics".

Our developers and testers love this change because now it's crystal clear where things go. Project management loves this change because its consistent and because it removes all that silly wrangling over nomenclature. Our CMMI overlords love it because we're still answering the right question ("Is it right") and because we have a well defined process for getting there. Bean counters love it because we're giving them lots of beans that they are very easy to find and very easy to count. 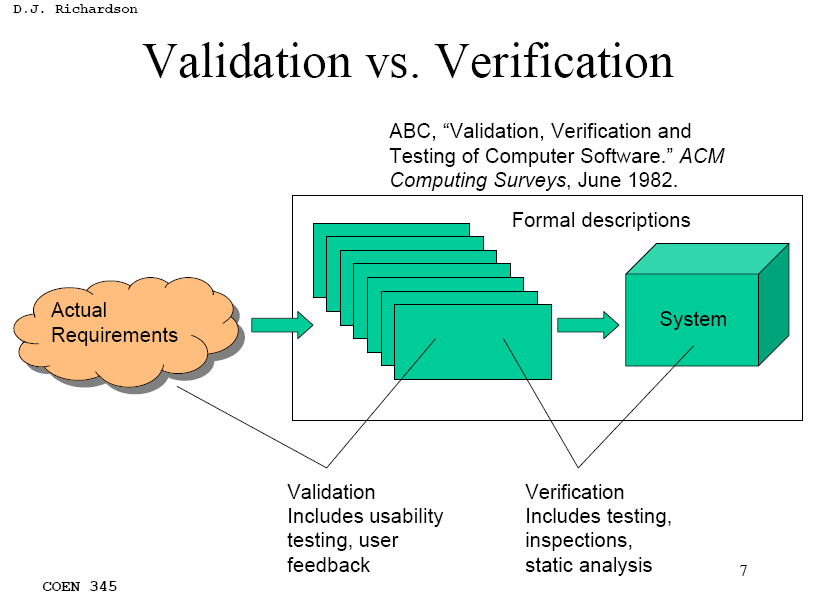 what testing (unit, integration, system, uat) will be considered verification or validation?

Unit, Integration, and System testing are verification. UAT is validation.

So the question is, what testing (unit, integration, system, uat) will be considered verification or validation?

In your example: verification is about making sure that "there are two fields with max. length of 64 characters and Save button." If some elements are missing according to requirement, then it does not pass verification. It is also a first step.

"validation is" - more about input and behavior of given required elements. In your case, it is validation of max. and min. input length, special character allowance, and any other related business rules.

All this is done on unit testing first and propagated to next stages if there are some related business-data flow.

2
Why some consider static analysis a testing and some do not?