How to reduce tight coupling between two data sources

I'm having some trouble finding a proper solution to the following architecture problem.

In our setting (sketched below) we have 2 data sources, where data source A is the primary source for items of type Foo. A secondary data source exists which can be used to retrieve additional information on a Foo; however this information does not always exist.

Furthermore, data source A can be used to retrieve items of type Bar. However, each Bar refers to a Foo. The difficulty here is that each Bar should refer to a Foo which, if available, also contains the information as augmented by data source B.

My question is: how to remove the tight coupling between SubsystemA.1 and DataSourceB? 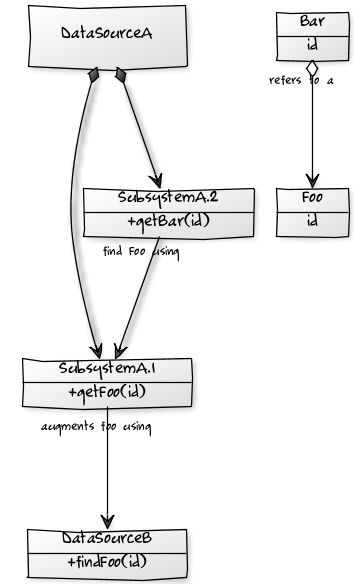 I created an app with much the same data architecture behind it; we have an onsite SQL database containing most of the automation and internal day-to-day information, and then a third-party cloud service used for sales, account management, field personnel, etc. Helpdesk needed information from both regarding clients' physical locations and equipment, and had been getting it from two different applications until I stepped in.

In my system, I didn't make either object a child of the other in the domain layer; any usage of the data from both of the stores must maintain two object instances. Neither one is guaranteed to exist, which is why I did it that way; the app can work only with cloud data, or with onsite data, or both, with more limitations the less data it has.

This sort of arrangement must necessarily be coupled at some level. You can have a DAL that can interface with both data stores, or you can segment the DALs, one per data store, and have a higher layer such as a Controller get the data from each and snap them together. But, at some level, your program has to have the smarts to put these two disparate data sources' data together.

You can reduce the coupling required in most cases by abstracting away details of exactly where the data comes from. If you get data from a web service, which is given to you as instances of generated classes, then put a converter in place to make a deep copy of the service class into something you control, which won't have to change if the data source does (only if the schema does).

Now, this can be a huge undertaking; the cloud we use has dozens of domain classes, some of which have hundreds of data fields, and - here's the kicker - you could very easily have to make large changes to the abstract data type to accommodate a move to a different cloud or other remote data source. For that reason, I didn't bother; I use the generated web service domain directly, and now that a change from the cloud to an offsite (but under our control) data store is looming, the details of which I still do not know, I am simply planning to change the forms and codebehinds of the app, which is where the data is "combined", to reflect the new schema and/or data objects. It's a big job whichever way you slice it.

Several things could prevent you from taking this approach:

It seems that at the top level there are two types: Foo and Bar, and you have only two top-level actions: findFoo(...) and findBar(...). That is the interface to the I/O layer.

Your description of the data sources implies that there are two methods on A: findFoo and findBar and one method on B: findFooAuxiliaryInformation. In findFoo you will need to merge the information from A and B.

I'm not sure what "tight coupling" you are referring to. There are three data types contained in the two datasets: Bar, Foo, and FooAuxData. The coupling between Foo and FooAuxData is inherent in the input data, and cannot be reduced. But that coupling should appear only in the findFoo method. That is the best you can do. The requirement is implemented in a single place. If it changes, you have to change that code.

If I understand correctly, Foo and Bar come from dsA. Bars belong to Foos.
Preferably, you don't want Bars assigned to Foos, unless the Foo has been supplemented by Foo.enhancedInfo that comes from dsB.

Your preference for assigning Bars to Foos is what's creating your tight coupling. I would qualify that as a "requirements challenge" which is forcing you down a particular path.

So the technical challenges are that dsB may or may not have information on any given Foo and that dsB may not even be available.

You need to decide how hard and fast that preference for Foo.enhancedInfo really is. Based upon that requirement, you can decide to either provide a Foo + Bar object, or not. Allowing a non-enhanced Foo to be provided only complicates the logic and tells me that the preference isn't as strict as it may appear. Determine what variants of Foo, Foo.enhanced, and Bar your application(s) can support and you'll have your ultimate answer.

There are other things you could do to move the Foo related information closer together, and that might solve some of these problems. The way your question is phrased, it sounds like you're dealing with the problem at the data object level and you may not be able to consider infrastructure type changes.

If the data in data source B cannot stand on its own, you would probably want to migrate it over to data source A if possible.

If they are independent but related, you should look into data virtualization. This will allow applications to treat the data as one set (when appropriate) in an agnostic manner. Depending on your platform, there will probably be an existing framework/library that can help you implement this.

1
How to exchange rectangular arrays via HTTP efficiently and without tightly coupling requesters to responders?

11
Architecting a modular service application
0
Several interdependent models, each with several data sources — how to avoid hell and nightmare
0
How to design resilient web service clients?
0
How do microservices make it easier to avoid overly-tight coupling between components?
7
Information sharing in event-based systems
1
Source code related information should be stored in database or file?
2
Granularity of microservices and containers
6
Clean Architecture: Use case spanning multiple UI elements