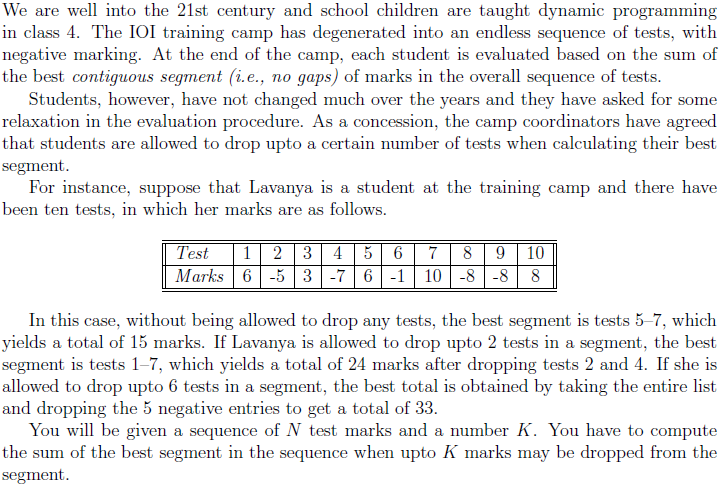 The task is to find the most profitable contiguous segment of tests, given a sequence of test scores, with being allowed to drop any k tests from a chosen range.

The problem appears to be a DP problem at the outset, but complexity arises when the test drop condition comes into the picture.

What modifications can be made to the classic DP approach for this problem? Or is there a completely different approach to it?

Well, here how I would do it (without getting in too much detail)

I would keep track of the value of the all the results I dropped. I would probably put them in a sorted queue whose size is the allowed number of dropped test. It would sorted such as the dropped test the nearest to zero is at the start. As I go trough the list with the traditional algorithm, I would do the following :

That way, you always keep the subsequence without the worst mark of the sequence, and if you encounter an even worst mark, you can restore the value of a previously dropped mark to the value of your subsequence.

The original algorithm is basically:

The best possible range ending at a position is the maximum of:

Now, we need to calculate K endings, for different amount of dropped tests

The best possible range ending is the maximum of:

Not the answer you're looking for? Browse other questions tagged algorithms dynamic-programming or ask your own question.

4
How to prove a Dynamic programming strategy will work for an algorithm?
4
Round Table - Minimum Cost Algorithm
2
Domino Solitaire Algorithm
1
Rearranging Cartons Algorithm
4
Efficient algorithm to count number of substrings divisible by 3
5
Looking for a DP algorithm for a specific packing problem
4
Algorithm to determine best combination of keeping students together in their camp rooms
1
Merging algorithm for overlapping intervals
1
Algorithm – Number of strings containing every string of a given set a strings