Background: Here is the scenario, imagine I have a little Robot. I give this robot a Map, and I want him to traverse the map, after doing so, I want the Robot to tell me the shortest possible path on the map. So here is an example of a Map: 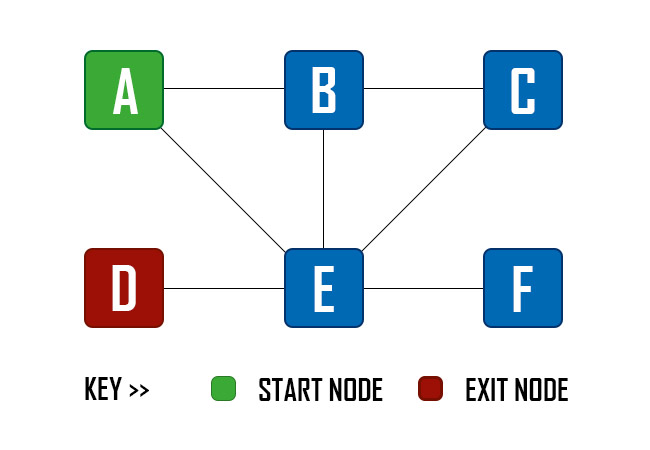 Difficulties: The Robot is given the Map in the form of a HashMap. For the above map it will be something like this:

So only when at node [ A ] will the Robot know that the neighbours of [ A ] are [ B ] and [ E ]. The Robot has no way of knowing what neighbours [ B ] has unless it is at [ B ], once there, the Robot can call the getNeighbouringNodes() method to find out the neighbours (Returned to Robot as a List).

Current Thinking: At the moment my logic for getting the shortest path from Start to Exit is as follows:

Essentially, it is a breadth first traversal. Once at the start node [ A ], I get the list of neighbouring nodes, then visit first neighbour in the list [ B ].

I think you get the idea.

My question is, am I doing it right? Is there a better, more efficient way than my method of traversal?

Any help would be greatly appreciated.

So long as you know your starting node (which in this case you do), you can use Dijkstra's Algorithm to find the shortest path. Although you didn't specify if there are weights for the paths, it accounts for that as well so long as there are no negative values allowed in the weights.

This uses the assumption that the robot has some form of memory. It isn't able to see parts of the map that it is not adjacent to, but memorizing the vertices and their weights is a must for any sort of efficient algorithm.

Not the answer you're looking for? Browse other questions tagged java computer-science programming-logic or ask your own question.

1
Reading graph inputs for a programming puzzle and then solving it
10
Programming knowledge vs. programming logic
7
In Java, why does (unsorted) Set implement Iterable, but SortedMap does not?
5
Determine equality of a DAG
1
Best Communication strategy for monitoring dashboard
0
How to translate business requirements/logic into code?