When was source control invented?

When was source control invented? Who invented it? What was it called?

Here is a pretty decent timeline of the major players in video form (no sound).

It suggests that SCCS was first, by a margin of about 9 years. 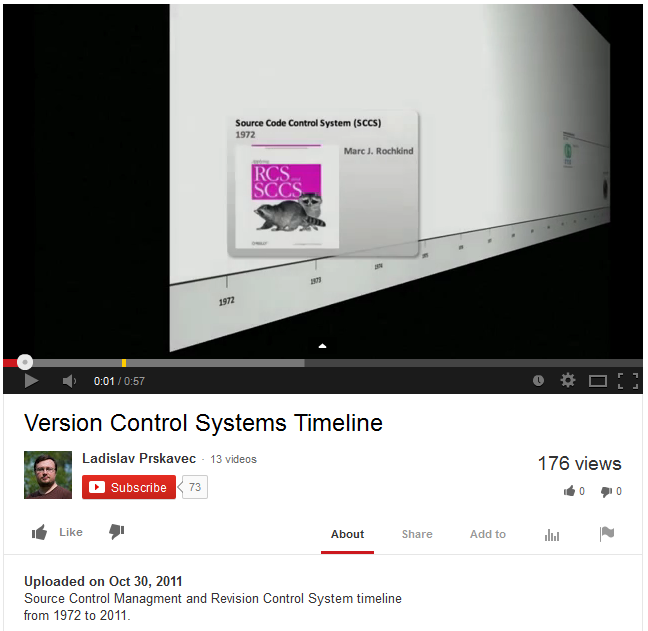 There is a lot missing off there though, as evidenced by this blog and the resulting comments.

In 1981, I worked a summer job at Charter Information in Austin TX. They were formerly Commercial Information Corporation of Woburn MA. They ran a Xerox Sigma 6 that had been field-upgraded to a Sigma 7. They used a thing called SPUD (Source Program Update) for source code control. It was tape-based.

While a student at UT Austin (1973-1981), I ran up against MODIFY and UPDATE, two source code control programs from Control Data Corporation for the CDC 6600 and later mainframes. I do not know when they first came out, but I suspect they came out not long after the 6600, which (if memory serves me) came out in the late 1960s.

I suspect that IBM had something well before anyone else did, but I have no knowledge whatsoever of IBM mainframe history, and I like it that way.

The IEBUPDTE program, originally created for IBM's OS/360 system, dates back to 1962, 10 years older than SCCS. Its purpose is to apply a set of changes to a set of input source programs, creating a set of modified source programs. All source code was managed either as "decks" of 80-column punched cards, or as files that resembled them. These source program decks had "sequence numbers" in a fixed set of columns on each line or card (COBOL specified them to be at the left, in columns 1-6, almost everything else assumed them to be at the right in columns 73-80). Sequence numbers had to increase line by line, but most source code increased by 10s, 100s, or 1000s, to allow room in the integral number space between two lines for later insertions.

At its simplest level, that's a definition of Source Control. Unix folks would recognize that as what patch does, but using explicit numbering instead of implicit. It was common to apply sets of control decks to an input program in sequence, and to store those sets as a cohesive disk file (a Partitioned Dataset), which bears a strong similarity to the change histories that CVS and RCS store in their ,v files. IBM would frequently deliver code patches called Program Temporary Fixes (PTFs) in the form of large control decks that modified files as part of a single related changeset, which Subversion and Git users would find familiar.

Not the answer you're looking for? Browse other questions tagged version-control history scm or ask your own question.

7
Overlapping Version Control Repositories
15
What are the advantages of version control systems that version each file separately?
17
Are There Realistic/Useful Solutions for Source Control for Ladder Logic Programs
14
Version Control with SQL Server
24
Why are source control systems still mostly backed with files?
2
Is revision control fundamentally at odds with live coding?
34
How did version control work on microcomputers of the day in the 80s and 90s?