Path coverage - 1 test case is needed to cover the path. With X=-1, the second expression will not be tested and possible bug will be missed.
Condition coverage - test cases X=-1 and X=100 are needed to test both conditions.

Am I missing something or condition coverage is really stronger than path coverage?

Our next level of coverage is called condition coverage. The basic concept is that, when a decision is made by a complex expression that eventually evaluates to TRUE or FALSE, we want to make sure that each atomic condition is tested both ways.

Condition coverage measures the true and false outcome of each Boolean subexpression.

Neither one is "stronger" in the mathematical sense:

This means that claims that either side is somehow "stronger" would be invalid.

However, this does not imply that 100% MC/DC is always better than path coverage: the tradeoff is that it comes at much steeper "price" than a 100% path coverage due to the need to write more tests. Sometimes, a lot more. This has a potential of complicating the maintenance of your test suite.

An example pulled from Wikipedia:

two properties of the cyclomatic complexity, M, for a specific module:

In this example, two test cases are sufficient to achieve a complete branch coverage, while four are necessary for complete path coverage. The cyclomatic complexity of the program is 3 (as the strongly connected graph for the program contains 9 edges, 7 nodes and 1 connected component) (9-7+1). 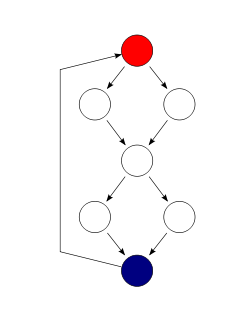 However, as noted a little further down (bolding mine for emphasis):

Unfortunately, it is not always practical to test all possible paths through a program. Considering the example above, each time an additional if-then-else statement is added, the number of possible paths doubles. As the program grew in this fashion, it would quickly reach the point where testing all of the paths was impractical.

Okay, I think I see where @user970696 in the comments is coming from. If I understand right, the answer is still strictly path coverage. The only time you'll have a "special" result different from branch coverage is when there's functions being called in the conditional, which may or may not run due to short-circuiting.

But when that happens, they count as part of the path.

Take this, for example:

However, when you add in a second if statement, as mentioned above, the number of paths will multiply - while each individual if statement stays at the same complexity.

On the local point of view, condition coverage is stronger.

On the global point of view, path coverage is stronger. So stronger that it is usually not achievable.

As already mentioned, neither

There are very simple examples which proof that:

Path Coverage is provided by:

But: For Condition Coverage we require A = true and B = false as well.

Condition Coverage is provided by:

Path coverage basically includes the coverage of the statements in the program that you have written.That is if the program contains the following lines of code as: 1. if(condition 1) 2. then call a function; 3. else 4. call that function; 5. call another function; So if we now closely observe the code we will find that there are 5 statements in total and the two of those statements are actually conditions. So a path coverage will start from the first path and will check if the condition is true. If not then it will switch to the else part and execute the statement 4 and 5.Thus in all the number of statements covered are 1,3,4,5. Whereas in the condition coverage the if and the else part are checked only not the 5th statement i.e. only statements 1 and 3 are checked. But also note that if there were only conditions then here in this case path coverage=statement coverage.

Not the answer you're looking for? Browse other questions tagged testing unit-testing test-coverage or ask your own question.