I'm an electrical engineer that was kind of thrust into the digital world and learning as I go. I'm programming a TI processor to do a PID (proportional-integral-derivative) loop, illustrated by this diagram: 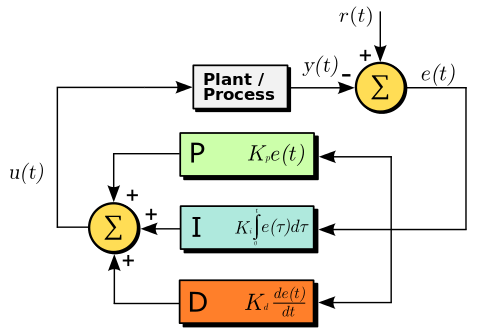 Anyone have any idea how to convert this circuit to C code? I'm a bit out of my element on this and could use the help.

Ok i just created an account in here when i saw this question. Am not able to edit your question so that i could correct the typo you did. I believe you meant RC series circuit in parallel instead of RE ( if it is, I don't have a single clue what it means)

(I couldn't resist my urge to draw this since i wanted to tell you how electrical/electronics engineers used to communicate in forums and emails without images ... and why we just love courier, fixed width font)

I must confess that the circuit you are using is simple to setup but is very complex mathematically, when it comes to tune the Propotional, Integral and Derivative constants of the system to a desired value individually its not possible.

I strongly suggest you use the circuit from this source for studying.

Even though a little tedious to set up, mathematically its much simpler to analyse as you can directly relate it to the standard mathematical form instead of ideal one.

Lastly the Vout goes to control a motor or whatever needs to be controlled. And Vin is the Process variable voltage.

Before getting your feet wet in C (sea?)

I assume you are reading the signals from some kind of analogue to digital converter. If not then you would have to simulate the signal as an input.

If using Standard form we have,

Assuming the the loop running time is small enough (a slow process), we can use the following function for calculating output,

where initially 'der' and 'int' would be zero. If you use a delay function in code to tune the loop frequency to say 1 KHz then your dt would be 0.001 seconds.

I found this excellent code for PID in C, though it doesn't cover every aspect of it, its a good one nonetheless.

If we take a slow process, then we can use lower frequency such that dt >>> code execution time for single loop ( far far greater than ). In such cases we can do away with timer and use a delay function instead.

Not the answer you're looking for? Browse other questions tagged c or ask your own question.