Is the term 'Front-End' synonymous with 'Client-Side'? If so, is this always the case?

As a relatively new (self-taught) web developer, I've heard the terms front-end, client-side, back-end, and server-side quite often. To me, front-end and back-end were always synonymous with client-side and server-side, respectively.

However, as I've begun working with MVC frameworks like CodeIgniter, I've come across a few instances of front-end referring to basically anything the end user sees (including server-side code), while back-end has referred to anything the end-user doesn't see (including CMSs). Client-side and server-side, to me, are much more concrete in their meanings; they have a very distinct line separating them. Front-end and back-end, on the other hand, do not.

In a conversation I remember having with another web developer, he referred to CodeIgniter (in its entirety) as a front-end, and this threw me for a loop. I wasn't sure whether to correct him and say that CodeIgniter was my back-end, or if my definitions of the two terms were completely wrong.

Searching for definitions of front- and back-end confused me a bit more in some respects, though they did clarify a few things. I'd just like to know where the lines are drawn between these four terms, and how they piece together in the context of web development (specifically on a LAMP stack).

I don't believe there is a formal definition for those terms, and as you noted there is overlap in some cases.

If I were to split hairs, I would offer these rough boundaries:

By way of example, and to highlight the confusion between the terms, I'll use Minecraft as an example.

If you dig into some of Minecraft's statistics, you'll see that they simply designate a client and server component to the game; they don't necessarily care where those components are run.

To directly answer your questions:

Is the term 'Front-End' synonymous with 'Client-Side'?

If so, is this always the case?

In the web world, I would say yes. In other realms, I would say no as explained in the rough definitions I offered.

Look at this web page. Pulling all the comments from the database is server-side, back-end work. Laying that data out in a template is front-end, server-side work. The AJAX voting widgets and the fancy text input box are front-end, client-side.

I generally find using client-side and server-side for describing development/developers is less vague. That portion of the client side where we're juggling/formatting data can be seen as being a back-end component. On the flip-side there's all the templating that tends to happen on the back end which being "for the front end" tends to result in people talking about them as front end Java or C# development. It's rare, but I've seen it in job descriptions.

The terms front end and back end are often used synonymous for client side and server side and in many cases it is ok. However, there are also important counter-examples. To me, front end is anything that shows something to the user.

In the following image, you can see typical technologies / concepts and how they fit into the (front end, back end) / (client side, server side) quadrants. 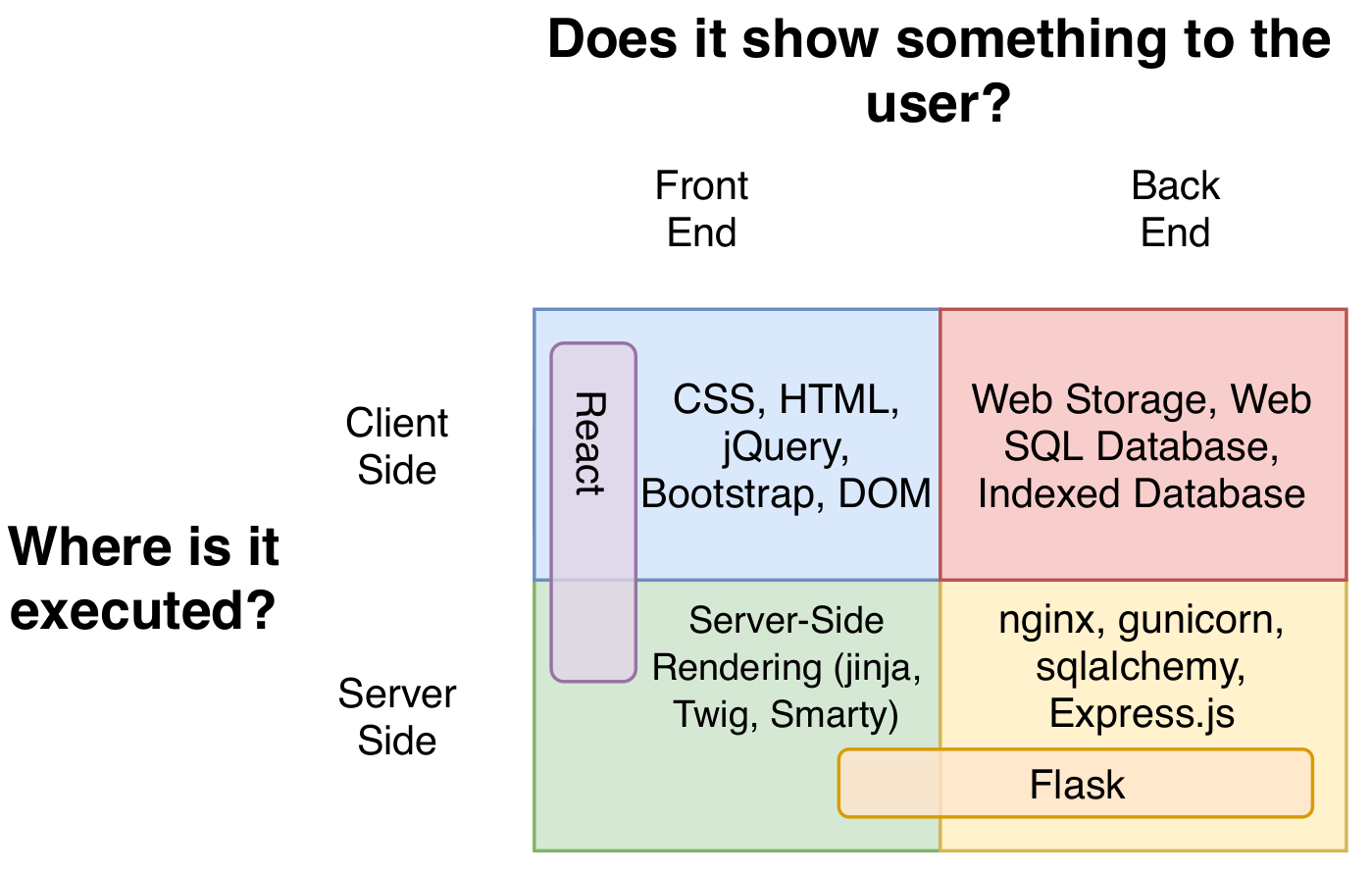 Front End and Back End Developers

Frontend and Backend developer are two very common roles. The line gets a bit fuzzy when you have things like React which can be rendered server-side and Flask which includes the jinja templating engine.

And although I would put technologies like Web SQL database and Indexed Database API in the "client-side backend" quadrant, the role that typically knows about this is the front-end developer role.

APIs are provided by the back-end teams and are used by the frontends to fill the app with the data. The backend is the persistent storage across devices, the frontend is the presentation layer. The API is the communication channel for both.

This question is somewhat older but let me add my 2c:

In my own web development, I used the term "frontend" meaning code - or other resources - which are processed in the browser for a while. Now, I use the term "client", because it might be confusing esp. when doing web applications. (Single Page Apps)

Simply because on the backend side, there is also a "frontend", which means in general the part of the application that is responsible for output (to the browser). So "frontend" can actually mean two different things. The term "client" however is imho more clearly describing something that is related to the actual client (in this case, the browser).

PS: Well, maybe I also should change my nickname to "client_dev" now ;)

Not the answer you're looking for? Browse other questions tagged terminology front-end definition backend or ask your own question.

13
Front end written in languages used for back end!
10
Why does “front-end” only pertain to web development?

7
Should the views or front-end server call the RESTful API layer
3
Web Services vs Server Side Methods
3
How would you optimize the rendering of 10,000 elements on a webpage?
10
Why does “front-end” only pertain to web development?
1
One resource per business object or many resources for many purposes?
1
Ways to authenticate and redirect with decoupled front-end web application
2
What is the term for a client that does things on behalf of the server?