How do the Application and Database Interface Layers interact at their boundary?

I was watching one of Uncle Bob's videos and he brought up the Database Interface Layer. He had this diagram showing it: 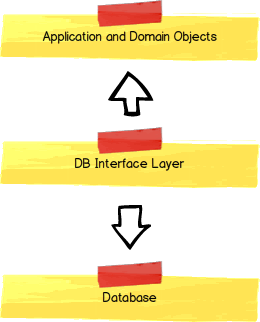 These arrows show that the DB Interface Layer is aware of and calls the Application and Database layer, but not vice versa.

The DB Interface Layer has "data records" in it. These are "classes" that have the name of the table and the fields of the columns. These are what I usually call DTOs. But these data records have all public fields and no/few methods.

The DB Interface layer is responsible for grabbing the data from the database, populating the "data records" and implementing an interface in the Application Layer like so: 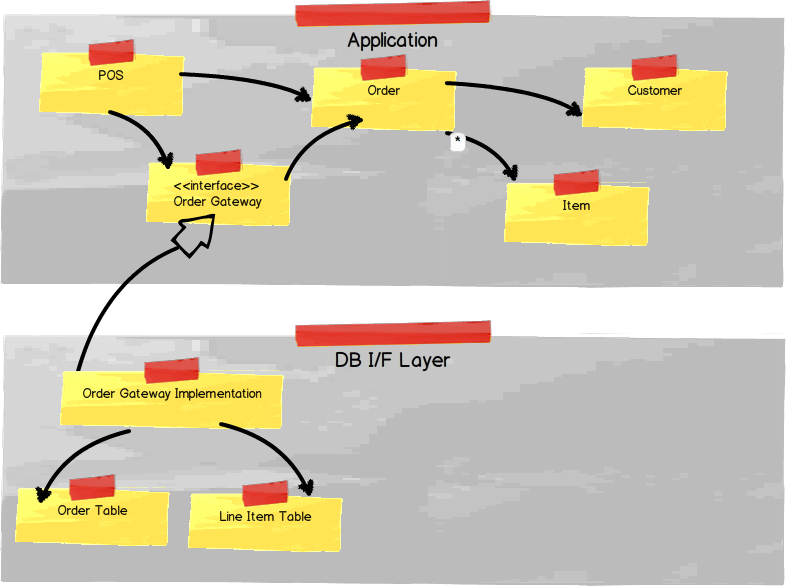 I'm a little confused because I've never heard about this separation before. Every project I've worked on uses the DTOs in the view which is apparently wrong (at least according to Uncle Bob's video).

But this is starting to make sense. Whenever I use hibernate I'm always pulling my hair out because I try to make the DTOs more OO and the library always fights me.

I think you interpreted the pictures in a wrong way! The arrows do not represent call direction in my opinion.

When you look at the 2nd picture, it's obvious that Order Gateway Implementation implements the Order Gateway interface and objects of type Order Gateway are used from the client type POS. So the actual direction of call is top down as you would expect it.

Well, let's bring the notion of DTOs to our mind: Those are objects containing certain amounts of data (no behaviour) aggregated for a specific purpose, usually to push them over the net in distributed systems. Although they're used in this context as Order Table and Line Item Table, there is no contradiction to using DTOs for views since views are also usually only bound to data.

The DAO's purpose is in the first place to encapsulate as much as possible from data source technologies. Since the DAO isn't only a single object, but a pattern including the interface and its implementation, you can map the DAO pattern directly to Order Gateway interface and Order Gateway Implementation resulting in no dependencies from application layer to specific data structures.

I'd like to add that while the arrows do not represent call direction, what they do represent is dependency.

This is a decoupling strategy called Dependency Inversion which would let you swap out the DB layer without changing the Application Layer.

I think your confusion comes from the term "Interface".

The Applicaton layer knows and uses the DatabaseInterface-Interface to get data from the database into dto-s or daimain-objects.

Many developpers call this the Repository-Pattern

If the arrows in your picture means "uses or calls" then the arrow from "Interface" to "order" in the 2nd image has the wrong direction.

Not the answer you're looking for? Browse other questions tagged design-patterns programming-practices enterprise-architecture layers or ask your own question.

2
When do domain concepts become application constructs?
5
Layers and layers of SOAP
5
What is the best way to create DTOs from entities and update entities from DTOs in a layered architecture?
0
Dynamic query from view layer
8
DDD: Creating reusable modules and service type distinctions (Domain, Infrastructure, Application)
6
What's the difference between an implementation detail and a technical concern
3
An alternative to a 3-layer-architecture?
0
MVP - Model Layer Architecture - Where and how to Setup Entities and DAO
5
Is My Data Access Layer Really My Domain?
1
In an MVC-patterned app, how should one build the interface between model and user interface layers to work nicely with threading?