Is it OK to split long functions and methods into smaller ones even though they won't be called by anything else? [duplicate]

Ask Question
Asked 8 years ago
Active 7 years, 9 months ago
Viewed 69k times
174
This question already has answers here:
One-line functions that are called only once (11 answers)
Should I extract specific functionality into a function and why? (6 answers)
Closed 8 years ago.

Lately I've been trying to split long methods into several short ones.

At first, this seemed to improve readability, because instead of huge 'God' methods and functions I had smaller ones with more descriptive names. However, looking through some code I've written that way, I've found that I now have no idea whether these smaller functions are called by any other functions or methods.

Continuing previous example: someone looking at the code might think that process_components() functionality is abstracted into a function because it's called by various methods and functions, when in fact it's only called by process_url().

This seems somewhat wrong. The alternative is to still write long methods and functions, but indicate their sections with comments.

Is the function-splitting technique I described wrong? What is the preferred way of managing large functions and methods?

UPDATE: My main concern is that abstracting code into a function might imply that it could be called by multiple other functions.

SEE ALSO: discussions on reddit at /r/programming (provides a different perspective rather than most of the answers here) and /r/readablecode.

Testing code that does lots of things is difficult.

Debugging code that does lots of things is difficult.

The solution to both of these problems is to write code that doesn't do lots of things. Write each function so that it does one thing and only one thing. This makes them easy to test with a unit test (one doesn't need umpteen dozen unit tests).

A co-worker of mine has the phrase he uses when judging if a given method needs to be broken up into smaller ones:

If, when describing the activity of the code to another programmer you use the word 'and', the method needs to be split into at least one more part.

I have a process_url() function which splits URLs into components and then assigns them to some objects via their methods.

This should be at least two methods. It is ok to wrap them in one publicly facing method, but the workings should be two different methods.

Yes, splitting long functions is normal. This is a way of doing things that's encouraged by Robert C. Martin in his book Clean Code. Particularly, you should be choosing very descriptive names for your functions, as a form of self-documenting code.

As people pointed, this improves readability. A person reading process_url() may see more clearly what is the general process to deal with URLs just by reading a few method names.

The problem is that other people may think those functions are used by some other piece of the code, and if some of them need to be changed they may choose to preserve those functions and define new ones. This means some code becomes unreachable.

So in short, splitting in several functions is usually a good idea in terms of readability. It may not be really good if the functions are very short and this creates the goto effect or if the names are not really descriptive, in that case reading some code would require jumping among functions, which may be messy. About your concern about scope and usage of these functions, there are several ways to deal with it that are in general language dependent.

In general the best advice is to use common sense. Any strict rule is very likely to be wrong in some case and in the end it depends on the person. I would consider this readable:

Personally I prefer a one liner even if it is slightly complex rather than jumping and searching across several files of code, if it takes me more than three seconds to find some other part of code I may not even know what was I checking anyway. People who do not suffer from ADHD may prefer more explanatory names that they can remember, but in the end what you are always doing is balancing the complexity in the different levels of the code, lines, paragraphs, functions, files, modules, etc.

So the keyword is balance. A function with one thousand lines is a hell for anyone reading it, because there is no encapsulation and the context becomes just too huge. A function split into one thousand functions each one of them with one line in it may be worse:

So there are no silver bullets here, but experience and balance. IMHO the best way to learn how to do this is reading a lot of code written by other people an analyzing why is it hard for you to read it and how to make it more readable. That would provide valuable experience.

I'd say it depends.

If you're just splitting it for the sake of splitting and calling them names like process_url_partN and so on, then NO, please don't. It just makes it harder to follow later when you or someone else needs to figure out what is going on.

If you're pulling out methods with clear purposes that can be tested by themselves and makes sense on their own (even if nobody else are using them) then YES.

For your particular purpose it seems you have two goals.

I'd write the first part separate and have it return a fairly general result that could be easily tested and potentially be reused later. Even better, I'd look for a built-in function that already does this in your language/framework and use that instead unless your parsing is super special. If it's super special I'd still write it as a separate method, but probably "bundle" it as a private/protected method in the class that handles the second (if you're writing object oriented code).

The second part I'd write as its own component which uses the first for the URL parsing.

I've never taken issue with other developers splitting larger methods into smaller methods as it's a pattern that I follow myself. The "God" method is a terrible trap to fall into and others who are less experienced or simply don't care tend to get caught more often than not. That being said...

It's incredibly important to use appropriate access identifiers on the smaller methods. It's frustrating to find a class littered with small public methods because then I totally lose confidence finding where/how the method is used throughout the application.

I live in C#-land so we have public, private, protected, internal, and seeing those words shows me beyond a shadow of a doubt the scope of the method and where I must look for calls. If it's private, I know the method is used in only one class and I have full confidence when refactoring.

In the Visual Studio world, having multiple solutions (.sln) exacerbates this anti-pattern because IDE/Resharper "Find Usages" helpers will not find usages outside of the open solution.

If your programming language supports it, you might be able to define your "helper" functions within the scope of your process_url() function to get the readability benefits of separate functions. e.g.

Whether to break a function into sub-functions will probably depend on whether there are meaningful/useful names for the parts and how large each of the functions are, among other considerations.

If anyone is interested in some literature on this question: This is exactly what Joshua Kerievsky refers to as "Compose Method" in his "Refactoring to Patterns" (Addison-Wesley):

Transform the logic into a small number of intention-revealing steps at the same level of detail.

I believe the correct nesting of methods according to their "detail level" is important here.

See an excerpt on the publisher's site:

Much of the code we write doesn’t start out being simple. To make it simple, we must reflect on what isn’t simple about it and continually ask, “How could it be simpler?” We can often simplify code by considering a completely different solution. The refactorings in this chapter present different solutions for simplifying methods, state transitions, and tree structures. 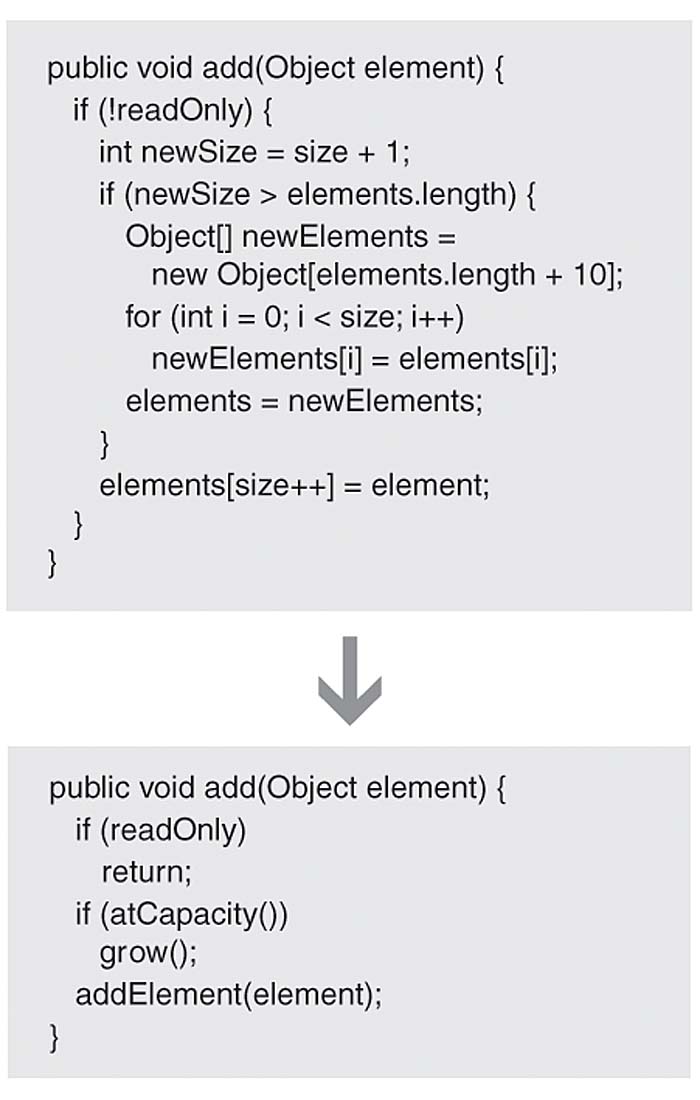 Addendum: Kent Beck ("Implementation Patterns") refers to it as "Composed Method". He advises you to:

[c]ompose methods out of calls to other methods, each of which is at roughly the same level of abstraction. One of the signs of a poorly composed method is a mixture of abstraction levels[.]

There, again, the warning not to mix different abstraction levels (emphasis mine).

A good rule is to have nearby abstractions on similar levels (better formulated by sebastian in this answer just above.)

Moving stuff out to smaller functions is usually better than having a lot of loops and such inside a function that concists of a few conceptual "big" steps. (Unless you can combine that into relatively small LINQ/foreach/lambda expressions...)

If you could design a class that is appropriate for these functions make them private. Put another way, with a suitable class definition you can expose the only what you need to expose.

I'm sure this won't be the popular opinion, but it's perfectly ok. Locality of Reference can be a huge aid in making sure you and others understand the function (in this case I'm referring to the code and not to memory specifically).

As with everything, it's a balance. You should be more concerned with anyone who tells you 'always' or 'never'.

Consider this simple function (I'm using Scala-like syntax but I hope the idea will be clear without any knowledge of Scala):

This function has up to 8 possible paths how your code can be executed, depending on how those condition evaluate.

On the other hand, if you structure the computation as

The more concrete responsability a method has, more easy to test, read and maintain will be the code. Although no other calls them.

If in the future, you need to use this functionality from other places, you can then easy extract those methods.

It is perfectly acceptable to name your methods like this:

I don't see why anyone would think that these would be called by some other process, and it is perfectly clear what they are for.

Not the answer you're looking for? Browse other questions tagged readability functions methods or ask your own question.

124
One-line functions that are called only once
47
When is it appropriate to make a separate function when there will only ever be a single call to said function?
46
Refactoring into lots of methods - is this considered clean or not?
31
Should I extract specific functionality into a function and why?
15
Is this pattern bad?
4
Creating one-line method for the single purpose of self-documenting code
3
Making some methods mostly contain method calls, while others doing “the lowest level” work
1
Using Functions for Never-Repeated Code
0
Should simple tasks be divided into separate functions?
142
Are private methods with a single reference bad style?
See more linked questions

27
Method extraction vs underlying assumptions
0
How can Guard Statements and Small Functions coexist?
9
Long method refactoring: leaving as is vs separating into methods vs using local functions
2
How should I call splitted functions? centralize them? or call it one next to one?
2
Is there a guideline as to when I should pass a collection as an argument or return a new collection?
4
Use local or nested function for readability?