I'm having hard times transforming a math formula to code. I can solve it on the paper easily, but it's hard for me to bring it into code form. Is it generally possible to bring a math formula directly into a program, or, if not, how can it be transferred?

Taking, for example, the Pythagorean Theorem: a² + b² = c². Having a and b defined in the code, it is straight forward to apply this formula.

Currently, I'm having hard times bringing the line-line intersection, that I've solved on paper, into my program. Assuming a line being defined as L: O + a * D, one can find the intersection of two lines by setting them as equal.

Using pen an paper, I would have already defined values and can solve the equation by splitting the equation into three sub-equations and applying simple substituion (I hope you can read my hand writing): 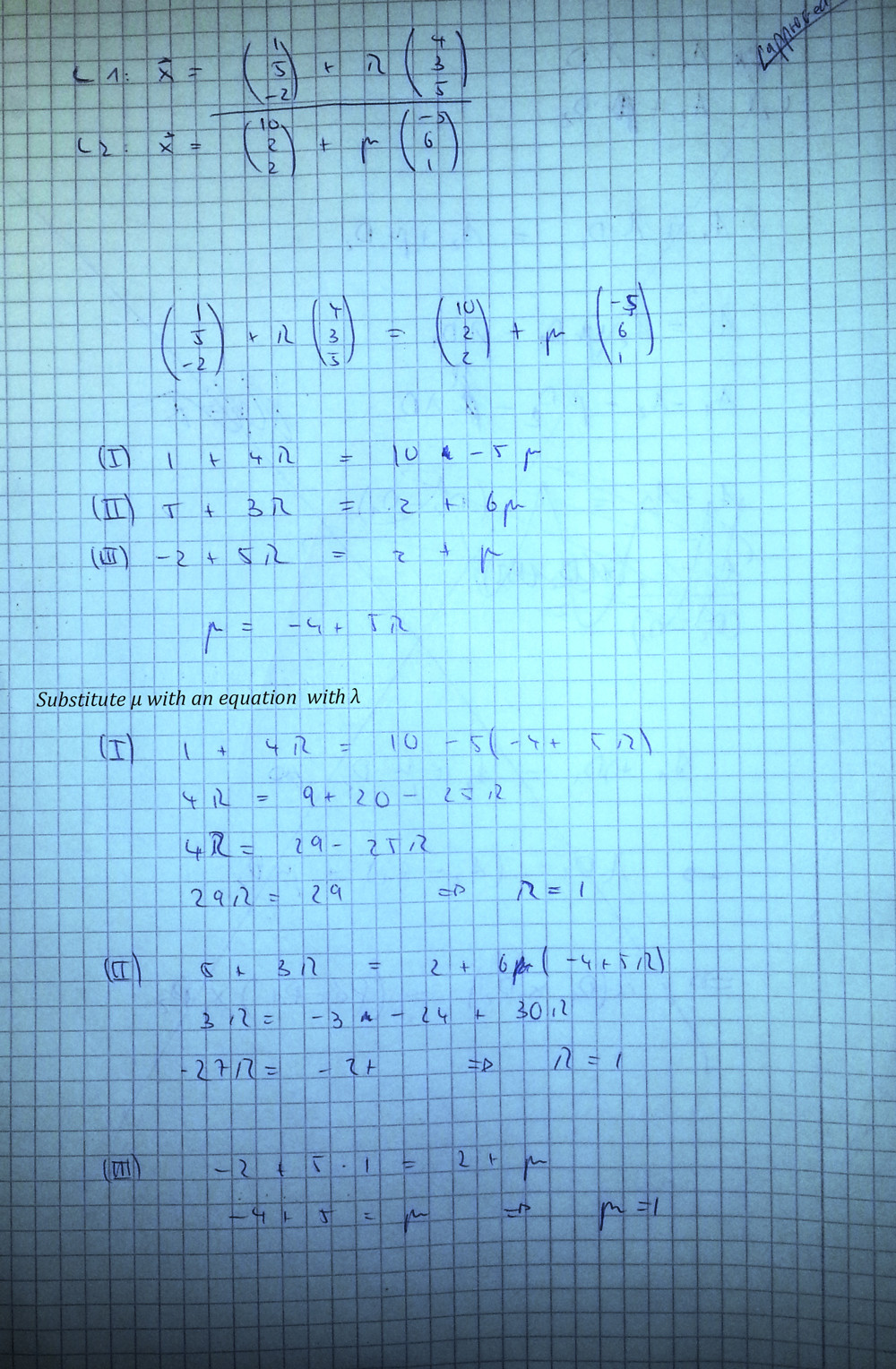 ... is that substitution can not be applied algorithmically, or I don't know how to do. The equation L1 = L2 must be transformed to a generalized formula that can be directly translated into code (like a² + b² = c²), but I don't know how.

I was hoping for a step-by-step explanation (either as answer or linked) on how to come to the formula/algorithm I am searching for. I know there are quite many websites that describe the intersection of two lines, but I would like to understand how to find the algorithm from a mathematical starting point.

As you already suggest in your question, there is a big difference between implementing a formula, and implementing a calculation routine. Your paper solution is a routine, not a formula.

I'd probably suggest taking a pair of the sub-equations and seeing if there is a unique solution that can then be used for the third line. There are a few special cases to handle algorithmically:

15
Implementing technical paper algorithms in C++ or MATLAB
4
Is there a formula to figure out the total execution time of sequential asynchronous processes?
8
Algorithm to use for shop floor layout?
5
Writing algorithm on 2D data set in plain english
6
Efficient method for finding closest point to a line segment from a set of points including line segment's vertices
2
Line intersection detection algorithm
2
Using a user defined equation to compute an entire list of numbers and store the list in an array
0
Complex Math Formula: Predict the value of variable if result is known
2
Storing a straight line equation