Are there any obvious flaws to this OO architectural model which I intend to implement using javascript? It is similar to the MVP model but instead the role of the model is broken down into three modules:

For a diagram showing how data flows through this model: 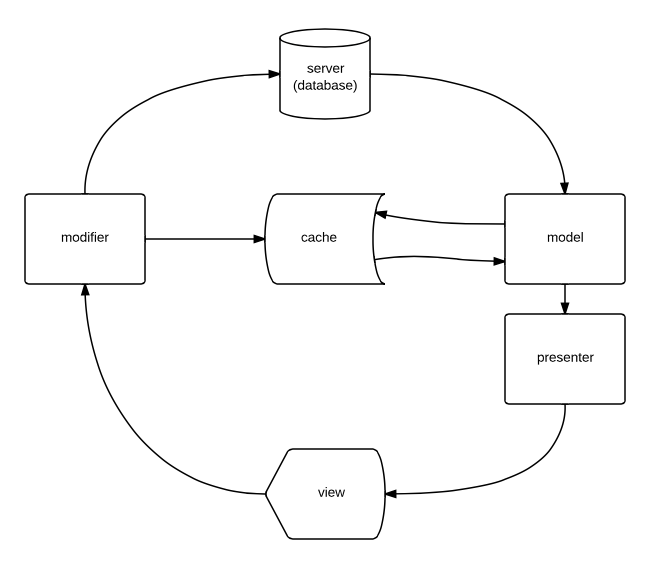 This is quite big project and there will be a number of others working on it so it would be good to get it right from the off.

The cache.store() and cache.retrieve() methods both only receive the information required to refer to the data in the cache, but do not specify how it is stored. The cache methods use this information to respond with or store the correct data, but the internal structure in which the data is stored is kept secret.

Alright, you're editing as you go so let's walk through what I'm currently seeing:

So a user selects something in a combo box triggering behavior to fill in the contents of another combo it's connected to.

The view requests data from the presenter with an ID(s) for the data and something identifying the combo needing to have its contents refreshed so the presenter knows who's asking so it can set up the callback to give the formatted data to the right object.

The presenter requests data from the model with the ID(s) for the data and a callback for formatting that data.

The big question for me... Why are you passing the same argument 3-4 times before anything actually happens? That should smell bad to you. Very bad. Any time you pass the same arg twice in a non-currying type scenario, you should take a whiff. If two objects need to act on the same argument, they should exist as components of another object.

Why does anybody but the combo view need to know what other combo needs the formatted data? Why should anything outside of the combo view know how it's supposed to format data for the view? Why should more than one top-level object be handed the ID to ultimately get the data?

As I said earlier:

I think you're breaking out subdomains without really needing to.

Model makes sense with cache and modifier inside it. Nothing else need be bothered with the details of how those two work and that general model object is also a good place to have helpful methods for adding new types of data templates containing all the data the model components need to implement the new structure and make it accessible/bindable.

Presenter is definitely a subdomain of your view. Converting data to a view-format is one of the primary responsibilities of any view. From a portability perspective this will always need to move with whatever it is that's interacting with HTML in other ways so there's not much point in separating it.

At the highest level I tend to see these three as the evergreen concerns worthy of separating in any non-trivial UI app. There is of course plenty of other stuff you might want to separate for a given architecture. I just see these three as somewhat critical if you're talking about a highly re-usable client-side architecture/framework.

There are a few flaws in the design, in my opinion.

All in all, I would make these changes to the architecture:

Not the answer you're looking for? Browse other questions tagged javascript architecture mvc modules mvp or ask your own question.

0
Using MVP, how to create a view from another view, linked with the same model object
0
What is this variation of MVC in JavaScript?
4
Designing storage service data structure for decoupled models sharing same data
7
How can one presenter be used for multiple views in MVP
14
Proper Model-View-_____ design
2
Where to put the domain in MVCS
4
In the MVP architecture, how should the Model layer get its data?
1
How to inform presenters of sub views of a main window about global data change in an MVC or MVP GUI app?
1
How does one-way data binding and MVC achieve loose coupling?