What did Rich Hickey mean when he said, "All that specificity [of interfaces/classes/types] kills your reuse!" 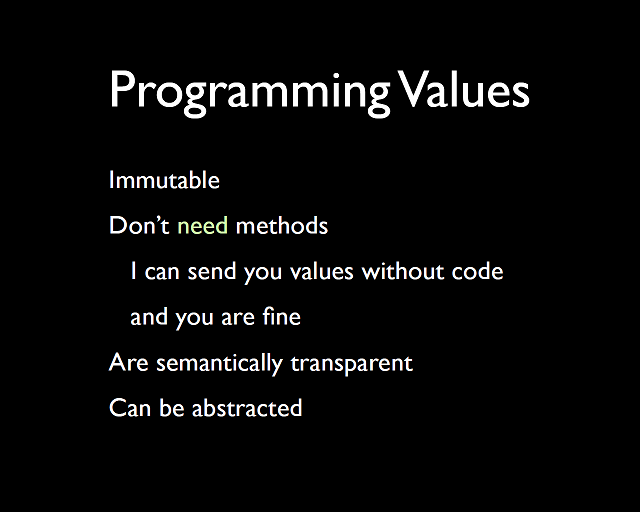 I know this is an old question, but I feel like I have to provide an answer because even the accepted one is not what Rich Hickey meant. What he is talking about is broader than types. For example, a String is a type in Java, but it would qualify as a value under what Rich is discussing because it is immutable (among other things).

Consider instead the idea of a Bob object created using a Person class in say, Java. It has methods like getName, getAge, getAddress etc. It may implement some interfaces as well, who knows. How do you deal with the Bob object in another system written in Java? How do you deal with it in a system written in another language? You would literally have to recreate the same methods, class, and interfaces in that language or system, and even then, those systems would not be interoperable.

You cannot hope to comprehend what the Bob object is except by poking it with methods one by one to glean some details, but never understanding the whole or being able to perceive it. When Rich Hickey was talking about "operational interface", he did not mean literal interfaces that classes adhere to, but how you interact with the thing itself, which in the case of objects would be methods like getters.

Now compare this with Bob in the form of a map like so (we'll use Clojure):

That's actual data. You can see the whole of it instantly. You can pass it into various functions, you can alias it (with objects you would need to snapshot/lock/copy in case it changes), you can do comparisons to see if it's equal to some other data, you can send it over the wire, other languages can easily manipulate it because they all have some notion of ints, strings, maps, etc. If you stick to data like this, you can use generic functions that operate on it instead of methods which are specific to your type or interface. (and which don't exist in other languages or systems!)

He followed up with an example, asking you to imagine that instead of asking for a web page and getting the value itself (the html string and assets) you had to individually ask for each thing (getHeader, getBody). How do you know that in the end you are receiving the page exactly as the author intended? What if something changes in between calls?

This is the problem with place oriented programming and imperative languages, where things are mutable. To sum up Rich's talk, information systems should be focused on values rather than implementation specific constructs like objects, because values are universal and easy to extend, share, and preserve. Erasing and overwriting made more sense when resources were limited.

0
Is using the Pair class a sign of primitive obsession code smell?
1
Is there a way to prevent variables from changing their type in Python?

4
Is this Hybrid of Interface / Composition kosher?
10
Conceptually what does it mean when it is said that each thread gets its own stack?
17
What are the differences between abstract classes, interfaces, and when to use them
9
Code re-use in C++, via multiple inheritance or composition? Or...?
3
Revisiting Fowler's "Public versus Published Interfaces" article with regard to versioning and microservices
3
Where should I use abstract classes vs interfaces for a REST API client?
1
Dependency Inversion Principle and Lower-Level Code Reuse
2
Confused about inheritance and correct usage. Should I avoid using members in base class?