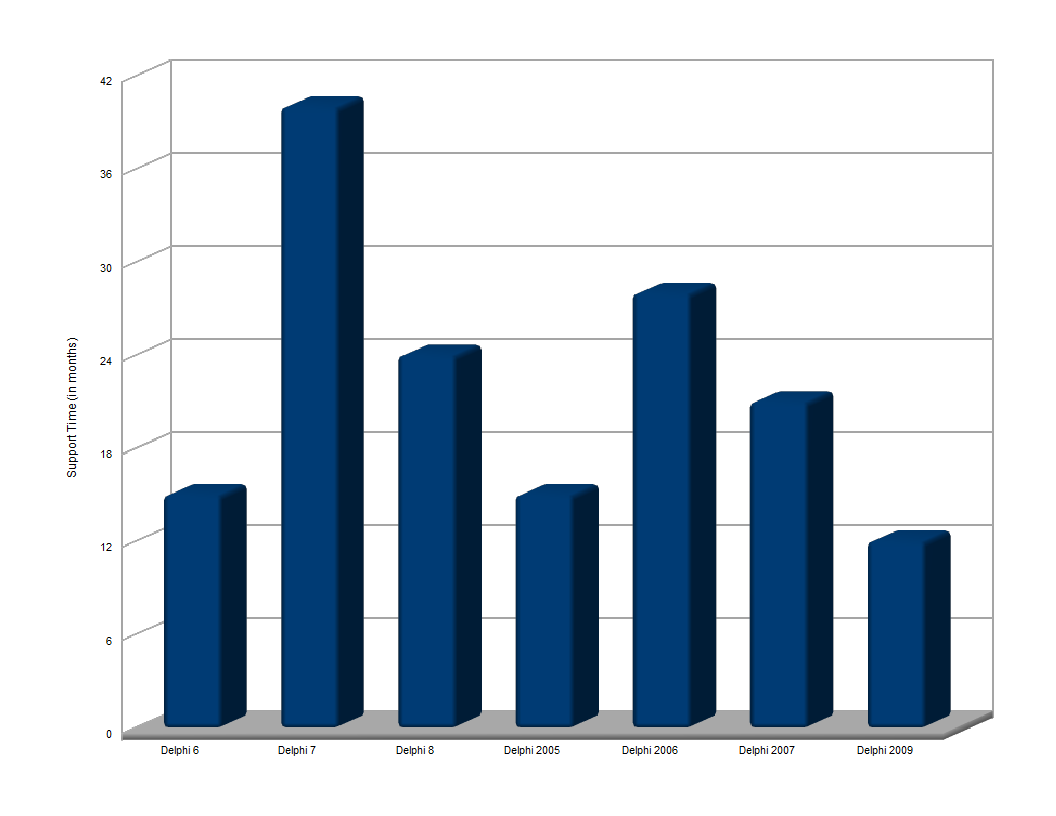 This is a chart I whipped together showing the length of active (meaning ongoing bug fixes and service packs) support offered for each version of Delphi. It is based on the published support data obtained from Embarcadero's website. Delphi 2010 and XE are excluded because their active support is still ongoing so they can't really be compared accurately.

Ironically, Delphi 7, which was regarded by many to be the most stable until the release of Delphi 2009, had a support cycle three times as long as Delphi 2009. Granted, this chart spans three different companies with three different agendas. My question is why is Delphi 2009's support cycle so short? I understand Embarcadero has a business to run and they don't make money with service packs but really, 12 months? I would expect that of a $10 shareware title with low profit margins not a $900-$3500 world class development tool.

Your graph shows pretty clearly the differences in priority between the policies of Emabarcadero vs. Codegear vs. Borland. They would have different priorities and different expectations from their users. That might explain your graph. It's pretty clear from Embarcadero "All Access" that their intention is to make an MSDN style Embarcadero empire and sell their software as a service more than as a $900-$3500 dollar a seat behemoth.

They're really hybridizing the software as a service model though and I'm thinking they're trying to strike a balance between a steady release cycle and a steady stream of income. For my part, I hope we start using Delphi 2009 before they pull the plug on rebates for it.

Only Embarcadero management can answer this question with any accuracy or authority, and I am guessing they are not going to in a forum such as this.

My guess is that the length of time for support is related to the stability and quality of the product. Supporting a high quality product is easier than supporting a low quality one.

Not the answer you're looking for? Browse other questions tagged delphi support or ask your own question.

6
How to support a product built with agile development?
4
Support / Maintenance documentation for development team
3
With a small development team, how do you organize second-level support?
8
How do you include Support in your Sprint?
1
What issues do I need to consider when setting up a User Support group for a large enterprise system?
17
How do you support your code post employment end?