One of the main SOA service design principles is Service Composability principle (https://en.wikipedia.org/wiki/Service_composability_principle).

The idea is that by composing new services using existing ones as building blocks, one can rapidly develop new services. Kind of analogously to how you call exising methods of objects when you implement new methods. This is where much of productivity boost from SOA is supposed to come from. 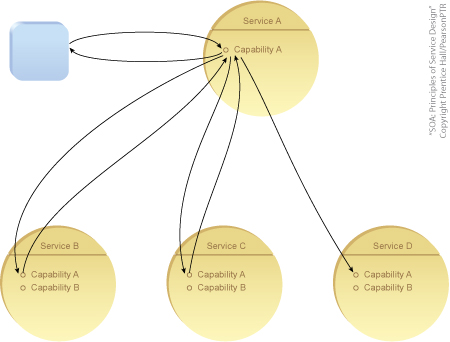 Does someone really do this in practice? I have seen this repeated endlessly in written text, but have not experienced working real world implementations myself. Most of the text also omits any mention of transaction handling, which seems to me to be the biggest obstacle in realizing composable services.

First, you really do need to tackle the transactions problem before you can compose any non-trivial services. Sure, if the example has services "findCurrentTime()" and "writeLogMessage()" its easy to not worry about transactions, but not when having real world examples such as "depositMoney()" and "withdrawMoney()".

I know of two options:

Both of these seem very problematic / close to unusable to me:

To me it seems that service composition is such a fundamental SOA principle that you really do not get the benefits of SOA if you cannot (conveniently) compose services. What's the reality? 90% of SOA users use "criplled SOA" without real service componsition? Or most users do in fact use service composition and I am exaggerating the difficulty of it?

The short answer is Yes!

I have seen this done at several large financial organisations, and, it has worked well.

The transaction issues are complex but usually handled by (expensive) middleware such as Oracles WebLogic EAI or IBMs Websphere ESB.

Yes, it can be made to work in practice. However, it may not be the best approach and is perhaps used as the default option more than it should. In my opinion, SOA became popular as a way of integrating legacy systems as organisations evolved their IT to automate ever larger tasks. It can be very messy but possibly worth it if legacy systems can be re-used. If you are lucky enough to be starting a green field project, other approaches should be considered before assuming it is the best way to go.

To answer some of your more specific concerns...

You can use transactions:

Considering the compensation based approach:

Compensating actions only need to be considered when there has been a failure. Does the service composition tool have a flag it can control that is cleared when running a workflow step the first time, but set on subsequent invocations? Like the possible resend flag in JMS. Then you can use what is called a 1.5 phase commit, which basically means go ahead if the flag is clear, but if the flag is set, first make a call to check if the state is already updated and needs to be made a second time. This still requires manual error handling, and can be complex or even impossible as you point out.

In some situations is doesn't matter:

This is the eventually consistent approach. Suppose one service sends an email. If the service composition fails and is re-started, the email gets sent again. That is slightly annoying for the recipient, but they probably realize its a duplicate and everything can continue without much of a problem.

You could also keep a log of emails sent, and use that to de-dup when the flag is set, and in that way only send the email once.

You can use asynchronous messaging to break transactions up into smaller pieces:

Consider a JMS queue which is transactional. Your service coordinator can update its state and post a message to the queue in a single Tx. Downstream services can take messages off, and update their state in a single Tx. Now you are coordinating services in multiple units of work, but each is atomic. If anything fails and has to be restarted no problem.

This still means that you are doing XA transactions over the database and a JMS queue, but this can still be efficient using the last resource gambit to avoid the full over-head of XA.

Alternatively you can use this pattern but with a 1.5 phase commit to the database and JMS. OR you can run JMS without transactions but make it more reliable by clustering.

Async messaging can also help to decouple systems, as producers and consumers can become more independent of each other, reducing the amount of coupling in the over-all system, and making it more flexible. This kind of decoupling is pretty much essential when it comes to large organisations with lots of diverse services.

No, it's a myth. This is wrong intention to have when designing service architecture. There is a whole bunch of problems:

There are even more wrong ways to approach service architecture. So be cautious.

Not the answer you're looking for? Browse other questions tagged web-services soa transaction or ask your own question.

7
What's the best practice to do SOA exception handling?
13
How can you effectively use web services in an enterprise environment if you can't use transactions?
1
Need some critique on .NET/WCF SOA architecture plan
4
Transaction Design Pattern for MVC and location of responsibility?
6
Is this breaking SOA?
1
How do workflow tools (jBPM) keep transactional state consistent?
14
What is really different between SOA and Microservices
1
Are the following project distributions valid SOAs?