How did Strassen come up with his matrix multiplication method?

The famous Strassen's matrix multiplication algorithm is a real treat for us, as it reduces the time complexity from the traditional O(n3) to O(n2.8).

But of all the resources I have gone through, even Cormen and Steven Skienna's book, they clearly do not state of how Strassen thought about it.

What is the rationale of Strassen's matrix multiplication algorithm? Is this a lucky accident or is there something deeper in it?

Apart from Strassen, nobody is able to tell you how Strassen has got his idea. Howeber¹, I can tell you, how you could have found that formula yourself—provided that you are interested in algebraic geometry and representation theory. This also gives you the tools to show that Strassen's formula is as good as it can, or more precisely, that there is no formula computing the product of two 2×2 matrices that uses fewer than 7 multiplications.

Since you are interested by matrices I assume you know basic linear algebra and will be a bit blurry for the more advanced details.

First let be E the set of all linear maps from a plane to a plane. This is basically the set of all 2×2 matrices, but we forget about a particular coordinate system—because, if there were a better coordinate system than the “default one” we could have interest in using it for matrix multiplication. We also denote by E† the dual space of E and by X = P(E⊗E†⊗E†) the projective space associated to the tensor product E⊗E†⊗E†.

An element of X = P(E⊗E†⊗E†) of the special form [c⊗α⊗β] can be interpreted as an elementary operation on matrices, which, in some appopriate coordinate systems, reads a coefficient of a matrix A and a coefficient of a matrix B and writes the product of these coefficients in some matrix C. A general element of X is a combination of these elementary operations, so the product π of two matrices, understood as a map from P(E)×P(E) to P(E), is a point in X.

The usual matrix product formula and Strassen's formula can be expressed as combinations of these linear operations, so let me denote by W₁ the set of these elementary operations [c⊗α⊗β] and let me describe geometrically their combinations.

Let W₂ be the variety of secants of W₁ in X. It is obtained by taking the (closure of the) union of all lines going through two (generic) points of W₁. We can think of a it as of the set of all combinations of two elemetary operations.

Let W₃ be the variety of secant planes of W₁ in X. It is obtained by taking the (closure of the) union of all planes going through three (generic) points of W₁. We can think of a it as of the set of all combinations of three elemetary operations.

Similarly, we define secant varieties for greater indices. Note that these varieties grow larger and larger, that is W₁⊂W₂⊂W₃⊂⋯ Hence the classical matrix product formula shows that the product of matrices is a point of W₈. Actually

As far as I know, Strassen did not put things that way, however this is a geometric point of view on this question. This point of view is very useful, because it also lets you prove that Strassen's formula is the best, that is, that π does not lie in W₆. Geometric methods developped here can also be used for a broader range of problems.

I hope, I caught your curiosity. You can go further by reading this article by Landsberg and Manivel:

¹ I will not fix this typo, because I caught a cold.

I've just been tasked with doing this for homework, and I thought I had a neat epiphany: Strassen's algorithm sacrifices the "breadth" of its pre-summation components in order to use less operations in exchange for "deeper" pre-summation components that can still be used to extract the final answer. (This isn't the best way to say it, but it's hard for me to explain it).

I'm going to use the example of multiplying two complex numbers together to illustrate the balance of "operations vs. components":

Notice that we use 4 multiplications, which result in 4 product components:

Note that the 2 final components we want: the real and the imaginary parts of the complex number, are actually linear equations: they are sums of scaled products. So we are dealing with two operations here: addition and multiplication.

The fact is that our 4 product components can represent our 2 final components if we simply add or subtract our components:

But, our final 2 components can be represented as sums of products. Here's what I came up with:

If you can see, we actually only need 3 distinct product components to make our final two:

But wait! Each of the capital letters are in themselves products! But the catch is that we know we can generate (A+B+C+D) from (a+b)(c+d), which is only 1 multiplication.

So in the end, our algorithm is optimized to use less, but "fatter" components, where we trade the amount of multiplications for more summing operation.

Part of what enables this is the distributive property, which allows A(B+C) to be equivalent to (AB+AC). Notice how the first can be computed using 1 add and 1 multiply operation, while the second requires 2 multiplies and 1 sum.

Strassen's algorithm is an extension of the optimization we applied to complex number products, except there are more target product terms and possible more product components we can use to get those terms. For a 2x2 matrix, Strassen's algorithm morphs an algorithm that needs 8 multiplications to one that needs 7 multiplications, and leverages the distributive property to "merge" two multiplications into one operation, and instead takes away from the new "fatter" node to extract one product term or the other, etc.

A good example: to get (-1) and (2) and (5), you can think about it as just (-1), (2), (5), or you can think about it as (2-3), (2), (2+3). The second operations use less distinct numbers, though. The catch is that the number of distinct numbers is equivalent to the number of product components you need to compute for matrix multiplication. We simply optimize for this to find a certain view of the underlying operations that leverages isomorphic outputs using a different variation through the distributive property.

Perhaps this could be linked to topology in some way? This is just my layman's way of understanding it.

Edit: Here is a picture of my notes I drew in the process of making the complex number explanation: 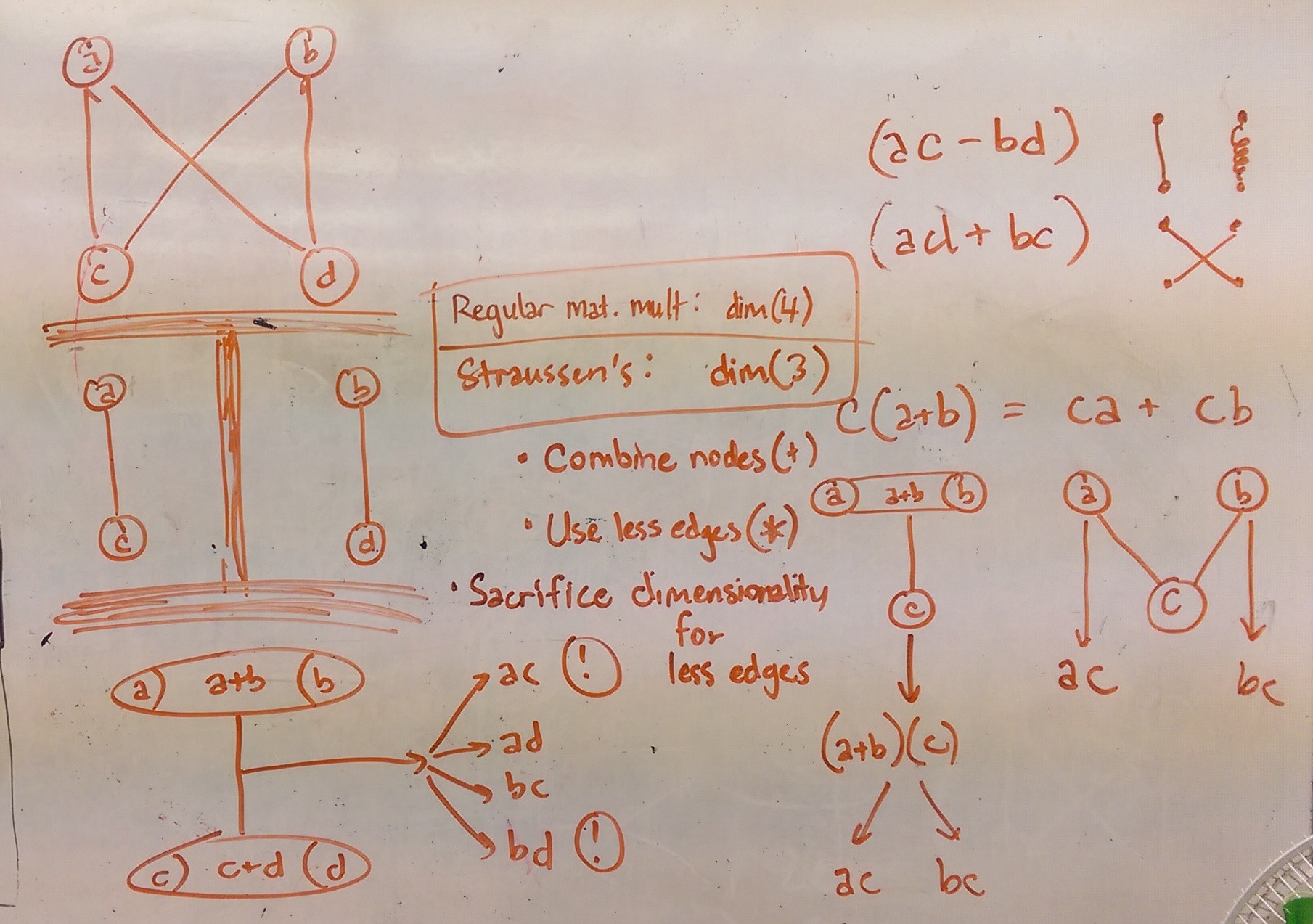 Not the answer you're looking for? Browse other questions tagged algorithms matrix or ask your own question.

58
Should a competent programmer be able to come up with his own shortest path algorithm?
65
What task did Dijkstra give volunteers, which was mentioned in his paper "The Humble Programmer"?
4
Magic square check for N×N matrix with minimum complexity
2
Dealing with units in arithmetic operations (multiplication and division)
0
How to compute a signature of a matrix
2
How do you come up with algorithms?
4
How to find number of points with same minimal distances on matrix
8
Which algorithm is performant for matrix multiplication of 4x4 matrices of affine transformations
2
Matrix multiplication range queries