What are the pros and cons of HTML5, native and hybrid mobile app approaches?

I want to develop a mobile application. I recently read an article on Telerik Forum, which compares among three types of mobile application and I don't know which one should I select to begin with. Here is an image describing the pros and cons of different mobile design choices 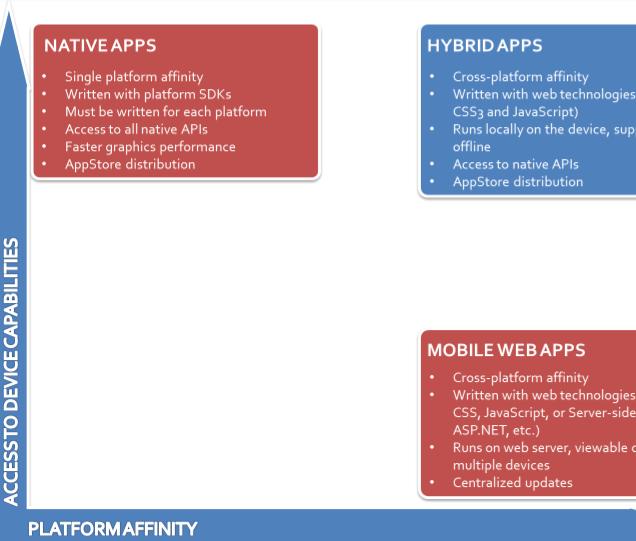 I'm a mobile developer who has spent a great deal of time considering this issue.

Why do you ask?

Most likely, you hope to reduce app development costs by:

Reasons may also include:

Let's establish exactly what we mean by each of the three approaches mentioned:

Native
An app that is installed on a device, usually from its app store (although can sometimes be sideloaded). For the purposes of this discussion, the UI of a native app does not usually consist of a full-screen webview only.

Mobile web
This can in fact be any web page at all, however for this discussion let's consider a single-page web app which attempts to imitate the look and feel of a native app. It is not a native app, it runs in the device's browser.

Most people probably understand a hybrid app to be a single-page mobile web app (again most likely imitating the look and feel of a native app), but packaged as a native app with access to native services (à la Phonegap).

However there is in fact a spectrum between the Phonegap model and fully native which I'll come to later.

If you can live with all the above, then read on for more about the challenges of single-page native-style web apps. However this section wouldn't be complete without reference to the FT app.

Financial Times
The FT web app is a famous example of this style of app. Here's an interesting feature from the UK Guardian newspaper about it.

It's certainly a remarkable feat of engineering. Note that it is currently still only available on iOS only -- this tells me that they are finding that resolving the challenges of advanced cross-browser development to be very difficult indeed.

This section applies to both mobile web and Phonegap-style apps.

Native-style look and feel within a web app is usually achieved with a framework such as Sencha Touch which provides a suite of UI components for you to use.

Such frameworks are fine for very simple UIs. However they lack flexibility. You won't be able to implement any native app design using Sencha, you'll need to adapt your design to what the framework can accommodate.

The main way in which these frameworks suffer is in trying to emulate the platform's own UI intricacies. That nice little bouncing effect you get when you've scrolled to the end of a list on the iPhone? Your framework needs to emulate that in Javascript. It's impossible to recreate it completely, it will be prone to slow down, and your users will be stuck in the the "uncanny valley" of an app which looks sort-of like native, but clearly isn't, and a non-technical user won't be able to put their finger on exactly why.

The "HTML5/Javascript is easy" myth

Device fragmentation within web browsers is rife, and when you get beyond the most basic HTML and CSS you'll notice things don't quite work as you'd expect. You might find yourself spending more time solving fiddly UI issues than you'd have saved doing it natively twice over. If you're going native, note that native app webviews are not the same as device browsers and have their own fragmentation issues.

And as your app gets more functionally complex, you'll find that you need more than basic jquery skills to keep your Javascript clean and maintainable.

That said, it's perfectly possible to create simple, functional apps pretty quickly with this approach. But it's pretty obvious when an app is doing it.

Further along the spectrum

So, we want a better UX than Phonegap-style apps can offer, without writing absolutely everything from scratch multiple times. What can we do?

There are a range of techniques available for sharing business logic across multiple native platforms. Google have launched J2ObjC which translates Java into Objective-C. With careful factoring of code, a Java library could be used on both Android and iOS.

Libraries such as Calatrava and Kirin allow codebases written in Javascript (and therefore anything that can be compiled to Javascript) to be manipulated from native code. Disclaimer: I work for Future Platforms who created Kirin; we have had great success using it on iOS with Javascript generated from Java with GWT, with Java code also being run natively on Android.

Use webviews... where appropriate

Full screen webviews have a lot of work to do to be able to imitate screen transitions and bounce effects. But a webview inside native app chrome can be indistinguishable from native.

There are standard and well documented methods for native apps and webviews to communicate.

Lists and tables can work particularly well when done in this way, however text entry is an example of something best handled natively (for full control over keyboard).

The approach that's right for you depends on how complicated your app is, and what level of UI polish you'll be satisfied with.

My motto: use webviews wherever you can, but make sure your users can't tell.

First check this survey to know what is going on !

Comparisons between native and hyprid:

HTML5 vs Native App : Which to choose ??

This one is really good : HTML5 v native apps: key considerations for your mobile strategy

With the below, my current stance on this debacle is that hybrid is good to start with, to explore your app, quickly iterate on customer feedback and stabilize the feature set. Then, to rewrite the app to native according to the spec, to enhance the experience.

I've left Mobile Web out, because it serves a completely different purpose. If you want to be in the app stores, Native/Hybrid is the way to go. If you want to simplify deployment and willing to sacrifice experience and technical ability, go for Mobile Web.

If you need to access the phones hardware, you should build a native app (in HTML5 you can access some of the hardware components of the device such as GPS).

If you are more comfortable with web development, you should stick with that unless you need to make a native app.

To me when writing any consumer app, what is paramount to its success is user acceptance and perception of the app. Because of that four reasons to lean in favor of native apps, despite the additional costs associated with learning, training and losing WORA(write once run anywhere) are:

What you want above everything else is a great user experience that helps your app succeed in a cut throat market place. Of course there are exceptions especially lack of skillset, lack of time and budget. Sometimes apps are geared to a limited set of business users who may not care that much about these things.

It is reasons similar to these that Facebook ditched their app strategy in favor of native apps for IOS and android:

Mark Zuckerberg: Our Biggest Mistake Was Betting Too Much On HTML5 http://techcrunch.com/2012/09/11/mark-zuckerberg-our-biggest-mistake-with-mobile-was-betting-too-much-on-html5/

Being a mobile developer myself, the worst thing is offline access. You simply force users to be online which should work in a lot of apps, but not in all.

The other great bad aspect is slowness. Time needed to parse remote data can take significant time. Yes, you can pre-fetch data during the load time, but in all other cases you cannot avoid slowness.

I found that such app ended app more expensive than native ones. I no longer recommend them to any client of mine.

The big problem with hybrid apps is the fragmentation of the frameworks: there are clearly much more of them (Ionic, Xamarin, React Native, etc) than there are native mobile platforms of interest (usually just two, Android and iOS). These frameworks compete, emerge, decline, so going hybrid will not save you from jumping from platform to platform even if you plan to keep your current team for life.

Google and Apple are trying they best in providing and supporting editors, debuggers, testing frameworks, refactoring tools and other means to develop for they platforms. Hence I would take a typical wording "it is just much easier to develop a hybrid app, edit with your favourite editor and open in a browser" with the reasonable reservation. Xamarin and React Native are development platforms, same as Swift or Java/Android are, and while "hello world" may look shorter, eventually should take the comparable time to learn properly.

If, for any case, a need for native components would arise (for instance, existing third party library must be integrated), you will end up with three frameworks rather than two: iOS, Android and your hybrid framework on the top, ending up with more complex architecture. Debugging such apps, stepping between cross-layer calls, logging all layers, keeping code in sync is complex to at times impossible.

What about the new features? Wearables? Instant apps now offered by Android platform? Showing additional data on external display? Hybrid apps now support many native features, but do they really support all of them? At any time, immediately?

Finally, not just performance and user experience, but also security may be more on the side of the native app. Hybrid framework adds the layer of indirection that may have own bugs, security bugs including.

Concluding all above, under the possibility to choose, I would definitely either go for the two native apps, one for iOS, and one for Android or alternatively would simply design a mobile version of the website without bothering with app development for any platform at all.

Not the answer you're looking for? Browse other questions tagged design architecture programming-practices mobile or ask your own question.

2185
What technical details should a programmer of a web application consider before making the site public?
5
How to develop cross platform mobile applications with native UI and Javascript backend?

1
Does Rhodes actually create a Native app or a Hybrid app
5
What is a better design for exposing information in a bug tracking system?
11
Software architecture vs System architecture vs Class diagrams?
2
Best practices for dynamically-evaluated dates in system?
3
Does layered architecture still to be implemented inside all other architecture pattern like SOA and Microservices?
0
Moving single tenant application with queue to multi tenants web application
3
How to handle complex business logic permissions in the database?
1
How to organize logic for table-like feature set? Looking for architecture pattern advice