Sometimes, although not often, I have to include math logic in my code. The concepts used are mostly very simple, but the resulting code is not - a lot of variables with unclear purpose, and some operations with not so obvious intent. I don't mean that the code is unreadable or unmaintainable, just that it's waaaay harder to understand than the actual math problem. I try to comment the parts which are hardest to understand, but there is the same problem as in just coding them - text does not have the expressive power of math.

I am looking for a more efficient and easy to understand way of explaining the logic behind some of the complex code, preferably in the code itself. I have considered TeX - writing the documentation and generating it separately from the code. But then I'd have to learn TeX, and the documentation will not be in the code itself. Another thing I thought of is taking a picture of the mathematical notations, equations and diagrams written on paper/whiteboard, and including it in javadoc.

Is there a simpler and clearer way?

P.S. Giving descriptive names(timeOfFirstEvent instead of t1) to the variables actually makes the code more verbose and even harder too read.

The right thing to do in such circumstances is to implement the algorithm, formula or whatever with exactly the same variable names as in the primary real-world source (as far as the programming language allows this), and have a succinct comment above it saying something like "Levenshtein distance computation as described in [Knuth1968]", where the citation links to a readily accessible description of the math.

(If you don't have such a reference, but your math is sound and useful, maybe you should consider publishing it yourself. Just sayin'.)

When I have had to implement algorithms like that, there are a couple of things I do.

Finally, if it's really, really, really complex then I resign myself to the fact that I own that code for the remainder of my time on that project.

I don't like relying upon an external document for someone else to understand the code. Yes, it can be necessary sometimes especially when getting into arcane details. But whenever possible, I try to keep everything within the code itself so it has a chance of staying updated and easily located. In this case, I value accessibility to information over expressiveness of the documentation.

In our projects, which are revolving around research in quantitative financial economics, we utilize a LOT of math, and we follow a combination of what has already been posted:

IMHO, the most important realization is that formulas often depend on context. Every math paper i know takes its time to set up the environment of the model; You should do the same.

text does not have the expressive power of math

You are right. Since you already are looking for a way to do it outside code, and Tex is an overkill besides having a steep learning curve, my recommendation is as follows:

You can use it either visually or you can write the equations in a special language.

You don't have to learn the language right away because when you use the GUI, the "code" is generated in a panel for you to see.

In the upper panel you can "draw" the equations using a pallete. In the lower panel the equivalent notation is generated. You can do it the other way around once you've got a grasp of the notation, writing in notation in the lower panel and seeing the graphical output in the top panel. 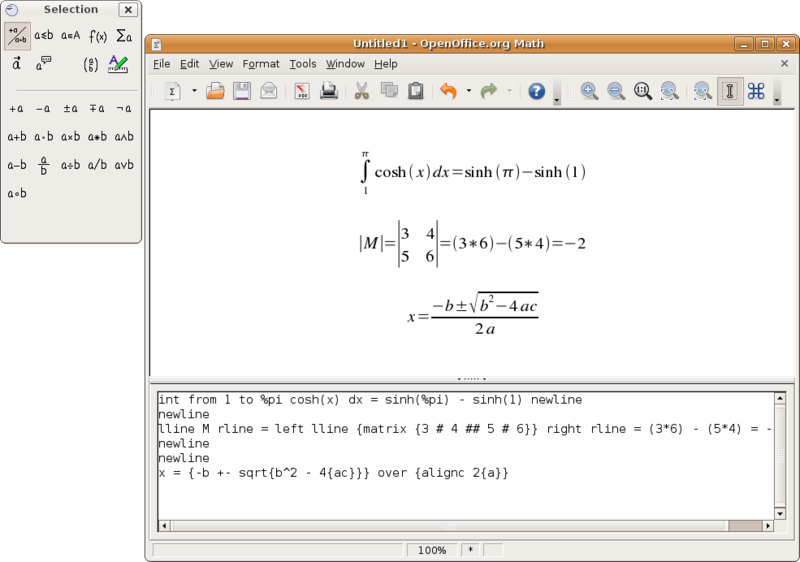 Not the answer you're looking for? Browse other questions tagged java documentation math or ask your own question.

18
Is it necessary to write a javadoc comment for EVERY parameter in a method's signature?
2
Where should I include comments in my “self-documenting code”?
155
My boss wants a narrated line-by-line English explanation of our code
18
Self-documenting code vs Javadocs?
9
How do I document necessarily complex code structures?
3
Transform math formula into code (line-line intersection)
10
Is there a standard for documenting a program's high-level architecture?