Need a transition from my workflow, or make it better / fix it

This is how I roll with git:

But so now, I have to quickfix (in devel) a core functionality (say re-correct database credentials in wp-config).
I then have to switch to lex and merge devel. And then to lex.th2 and merge lex. (So that changes from devel could goto lex and to lex.th2)

Doing all this severely messes up my history-graphs 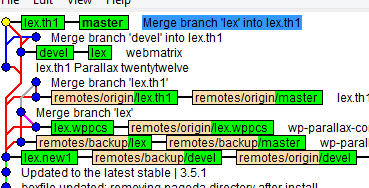 I'll admit that the "official" workflow was too much for me and I just took the parts that I liked from it... probably badly. So any suggestions how to make it "tidy" while still not complicating or deviating too much?

You should learn the rebase command and (and how to do it interactively). I do it because it lets me keep all the changes in a straight revision graph instead of a tangled mess.

This fetches the latest changes on your master branch and rebases your changes with that. I don't really mind the merge conflicts as I like to take them head on while I know what I did.

The order of commits is from top to bottom. But I can rearrange these the way I want them:

Save and close and the rebase is performed according to the text file. This way git will keep it all nice and tidy the way you want it... in my case a long nice straight queue of changes to be pushed.

There are times when I create topic branches, but I do the same thing before merging it to master. I.e. rebase the changes on the topic branch with master and then interactively rebase it if I want to tidy it up.

Not the answer you're looking for? Browse other questions tagged git workflows or ask your own question.

6
Workflow Foundation to separate data from business logic on a mid-sized App?
3
How to transition a small team developing on a remote testserver from svn to git
11
Single-developer GIT workflow (moving from straightforward FTP)
0
Github Workflow: Pushing small fix branches to remote, or keep them local?
21
What is proper etiquette and recommended GitHub workflow for simultaneously contributing to and diverging from upstream repo?
16
Workflow: Using binary document formats in Git without locks (moving from subversion)
6
So I'm a developing a workflow with vagrant+git…does this make sense?
2
Need help choosing/creating a workflow for web development
2
How can I make sure that only thoroughly tested changes make it into the master branch in git, without cherry picking commits from development?