What is the best way to keep third-party source code up to date?

For instance in my app, I'm using third-party source code from an open GitHub repository. What I've done is that I have downloaded the zip of the source code, unpacked it and imported it in my iOS app and then started modifying this source code to my hearts content.

In case your changes aren't something that original creator would accept then you can maintain your app in modular form. Try not to change the original interface of the 3rd party lib. That should make it possible for an update to take place.

As MichaelT has pointed out diff3 can be more suitable for such a comparison.

In getting a copy of the code and making local changes to it, you have effectively branched it. Meanwhile, back on the main line other changes have taken place and a 2.0 version has been released. 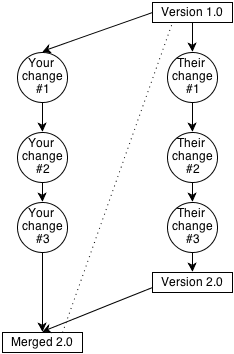 Note that these #1, #2, #3 do not need to match up, nor are they the same feature - just a representation of several changes that have been made to each codeline.

This is what it looks like now, and you are trying to make that merged 2.0 point.

For this, you need to use diff3 that that implements a three way merge of the your code, the oldest code, and their code. This takes the version 1.0 as a change.

Merging an entire major upgrade may be a significant undertaking. I can't say how much has changed in the mainline between version 1.0 and version 2.0. Long term, you should consider using git, forking the repo and then consistently doing pulls of changes into your branch. This is covered under pull in upstream changes in the git fork a repo article. Doing this for smaller changes will help you keep your code up to date and also reduce the workload compared to major changes. It will also keep you up to date if there are major sections being reworked that you have changes in so that you are aware you will need to budget time there to reintroduce your changes.

Not the answer you're looking for? Browse other questions tagged open-source ios third-party-libraries upgrade or ask your own question.

9
How do you cope with change in open source frameworks that you use for your projects?
31
What copyright date for an update to an open-source project from last year?
12
Organizing code for iOS app development
1
Licensing for hosted open source and 3rd party libraries
5
Best practices for merging a new version of third party source into an old version you've made changes to
8
What are the cases where keeping source code secret is justified?
64
What is the best practice for arranging third-party library licenses “paperwork”?
4
Do I update the copyright header when i modify the source?
3
Can you charge for apps that use open source software?