My question is on the best way to cluster a graph of class instances around specifically marked objects (objects are the graph nodes and the references to each other are the directed edges of the graph). To better explain my question, let me explain my motivation:

I currently use a moderately complex system to serialize the data used in my projects:

This basically define specific storage entries to specific objects. I then have "container" type objects that:

So, if I serialize 'a', it will serialize automatically all objects that can be reached from 'a' through the object reference graph, possibly in multiples entries. That is what I want, and it usually provides the functionalities I need. However, there are some structural limitations to this approach:

I am thinking of generalizing the process. Apart for the practical questions on implementation (I am coding in python, and use Pickle to serialize my objects), there is a general question on the way to attach (cluster) unmarked objects to marked ones.

So, my questions are:

Example of a simple object graph to serialize: 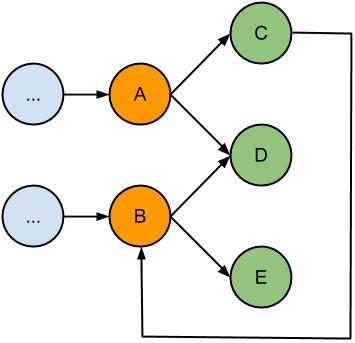 When serializing A, object B to E should be serialized but not blue objects because they are not reachable from A. Now, B is serialized in its own entry (i.e. file) and the question is how to choose where to serialize objects C to E, to A or B entry?

Some thinking on this example:

Note: I added the tag database because I think the answer might come from that fields, even if the question is not really.

Then, when you deserialize, you just make the object reference point back to the correct object.

Not the answer you're looking for? Browse other questions tagged python database graph serialization object or ask your own question.

7
Pros and cons of intrusive and non-intrusive serialization?
2
Dependent Object Serialization
6
How do I resolve $ref in a JSON object?
2
Data serialization architecture, injection on construction vs. on function call
2
Class design for JSON serialization
1
Custom serializer or create base class which implements IXmlSerializable?
2
When do I prefer a local DB over serialization for local data storage?
4
Serialize Entity Framework Objects Without Lazy Loading