How big should a single commit be? [duplicate]

A discussion has come up at work and I want to get the opinion of other programmers.

During my time in college, we only used SVN for sourcecontrol. Everybody commits to the same server and all changes are pulled to all machines. In this system, it's easy when you should push your changes: when you're done with your changes. However, this makes merging changesets by multiple developers a complete nightmare.

However, for the past year or so that I've been programming professionally, we've been using Mercurial for source control. At first, I was using it like SVN: work on a featur, commit and push in one go, but only when it's finished.

Gradually, my habits started to change. I learned about branches, how commits could be a draft, public or secret and even used a USB stick as a central repository. My commits became smaller, but they increased in quantity. Instead of committing and pushing in one go, I would make commits for every change in a named branch.

Here's what the repository for one my personal projects looks like: 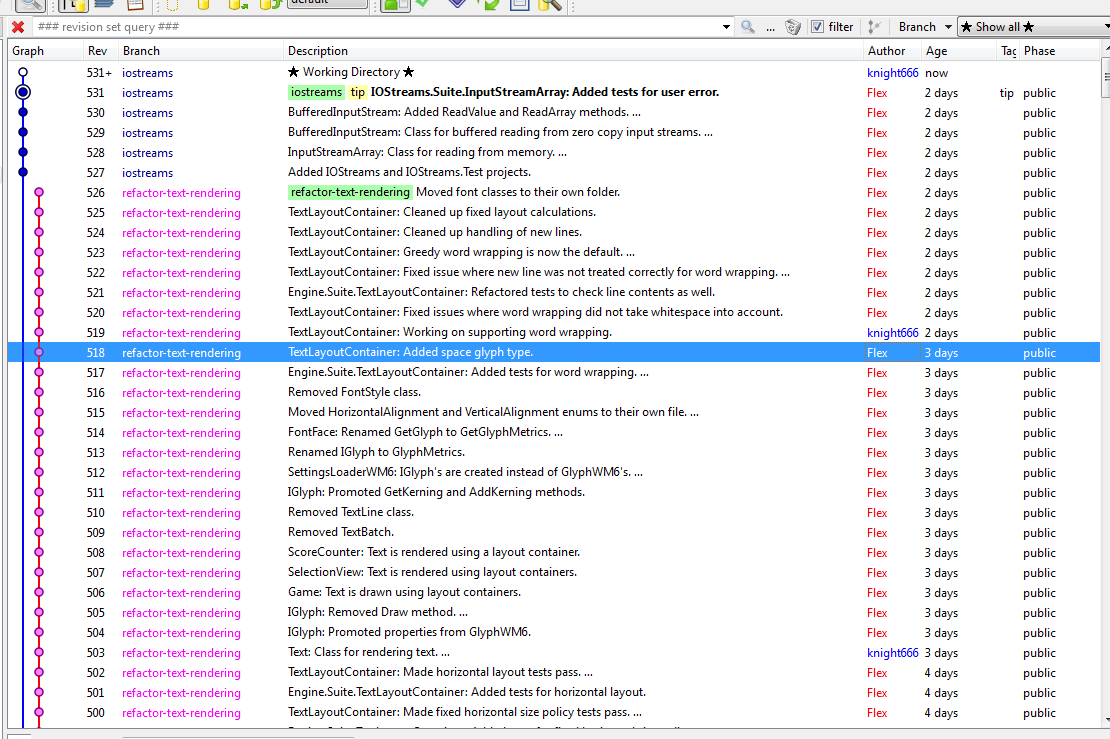 I see a couple of advantages in this approach.

However, the lead developer is annoyed by my methodology. He feels that the small commits clutter up the repository's history. His preferred methodology is to work in a patch. When the feature is done, he merges the commits and pushes them in one go.

So, what do you prefer? A flow of consciousness history of commits or a patch of changes every now and then? Or something else entirely?

I went looking for book references for this, but sadly cannot find them.

In general, I believe that small commits are widely considered to be best practice. Or more accurately: the smallest commit that represents a cohesive feature that is in a build-able state.

Take your commit history, for your personal project as an example. There's 13 commit messages for 1 day (ie. the "2 days ago"). Now imagine what that history would look like for the same time period if 50-200+ developers worked on the project in the same manner. That's 650-2600 commit messages a day. The commit history for a week would intractable for a human.

So it depends on the team size: On small teams, it's good detailed information. As the team gets larger it quickly explodes into a mess of noise, making the history functionally useless.

So, to sum up: always aim to make the smallest commit you can that is both necessary and sufficient to complete a single logical unit of work.

I'm almost certain there is a decent amount of opinion in this space, but I tend to follow some rules from which tend to dictate the size of commits, some thoughts about this:

I think if you follow both of those rules of thumb, your commits may or may not necessarily be "large" or "small" (relatively speaking). Sure small commits are nice, and sometimes easier to reason about, but if they're all strongly coupled together, it might make it a bit tougher to deal with. I am ok with a "large" commit (within reason) as long as it's reduced to it's smallest cohesive functional grouping.

I prefer your approach when using Mercurial. Modern source control systems like Git and Mercurial are built around the idea that fast commits enable you to commit frequently. You shouldn't save up a large number of changes and commit them in one go.

Git allows you to condense multiple commits down into a single commit using its "squash" feature, but this isn't provided by default in Mercurial. Changing commit history goes against the Mercurial ethos, which states that history should be immutable. However, if you do want to try and replicate Git's squashing feature - so that you can continue to use your tools properly whilst still adhering to the nutty behaviour of your lead dev - this question might help:

There are valid arguments either way, on the one hand, source control isn't a backup mechanism, you should use shelving, a local repository or plain old backup to make sure your work is safe until committed to production. On the other hand, if a set of changes represent a complete and discrete bug fix, feature, etc. then it seems reasonable to commit them when ready. In the future, reviewing smaller, more "modular" commits may prove easier rather than wading through a revision with 100s of changed files.

Also, trying to maintain purity in a source control log seems like a losing game in the long run, and is focused on managing an artifact of the development process rather than the software itself.

Not the answer you're looking for? Browse other questions tagged project-management version-control or ask your own question.

89
How often should I/do you make commits?
11
Git for a solo developer

5
Forgetting to merge changes from trunk to branch
10
Why are developer commit statistics harmful?
7
What quality level in the commit history can/should I expect/enforce?
15
Why not commit unresolved changes?
6
Git: rebasing on top of a refactor that affects the target rebase branch
1
How can I avoid editing conflicts repeatedly when merging from one to branch to another?
47
Is it ever OK to commit non-working code?